Corrina: It Had Me. Until the End

Ray: First up, I totally understand how the concept of this issue – “The Trial of Batwoman”, as Batman brings in all his allies to discuss whether Kate should be allowed to remain part of the Bat-family – could turn off a lot of people. And I think Tynion understands that in this oversized prelude to his final arc, because the issue feels largely like a subversion that, if not exonerating Batwoman, implicates Batman in a lot of ways too. Detective Comics #975 opens with a powerful flashback to the day of Kate’s mother’s funeral, when she and Bruce commiserate over their mutual losses – and Kate suggests a more permanent solution for the killers. From there, the Bat-family gathers to propose their solutions for Kate’s actions, and there’s a lot of little details in this issue that really work. I don’t think Tynion likes Damian very much – he comes off as excessively cruel and rude this issue. Telling Bruce’s adoptive kids they shouldn’t be able to call themselves Bat-family? Someone slap this little twit.

However, aside from Damian – who continues to be the character who’s backslid the most for Rebirth – the family is bang-on. I loved the little scene of Alfred trying to distract Cass from the trial, showing her more kindness and attention than Batman ever seemed to. The Bat-family gets their say one by one, from Dick’s optimism to Jason’s sarcasm, to Tim’s utopian vision. However, the guest star who turns out to be the breakout star here is Barbara, who brutally indicts Batman’s entire plan for the Belfry, arguing that he was unconsciously using everyone around him and calling him out on his treatment of Cass and Steph in particular. With the current BoP title ending soon, might be time for a revival with Barbara mentoring the younger Batgirls? At the same time, Kate is unconcerned with this show trial and instead chooses her own destiny. I’m not sure how this works exactly with her solo title, but it feels like everyone in this issue is written as well as they have been for this entire run.

Corrina: I had so many issues with Kate’s decision in the last issue. I still have those same problems after reading this story, in that this killing of Clayface is going to define her for years and I maintain that this is a bad direction for her.

However, this story caught me, especially with the Bat-Family’s discussion and how deftly Tynion handles all the characters. They all feel like distinct people, a family, but one that is also made up of individuals. So I was with this issue and Tynion shows what a good writer of teams and families he is. I also love that Batman asked for help and advice. We’ve come a long way from the whole “Batman pushes his family away” storylines that dominated the early 2000s.

But then came Kate’s final decision.

What the…what the? Somehow, the choice Kate makes to feel better about (as she sees it) being forced to kill and breaking Cassandra’s heart is to join a group that didn’t care at all about civilian casualties, so long as they were for the greater good?

The group that created the attack that led to Tim Drake’s death/abduction and caused so much pain to so many, including Tim himself, Steph, and Bruce?

HOW IS THAT SEARCHING FOR REDEMPTION? How is that wanting to make up for the pain she caused Cassandra?

I throw up my hands. 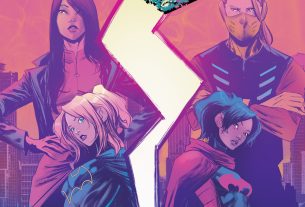