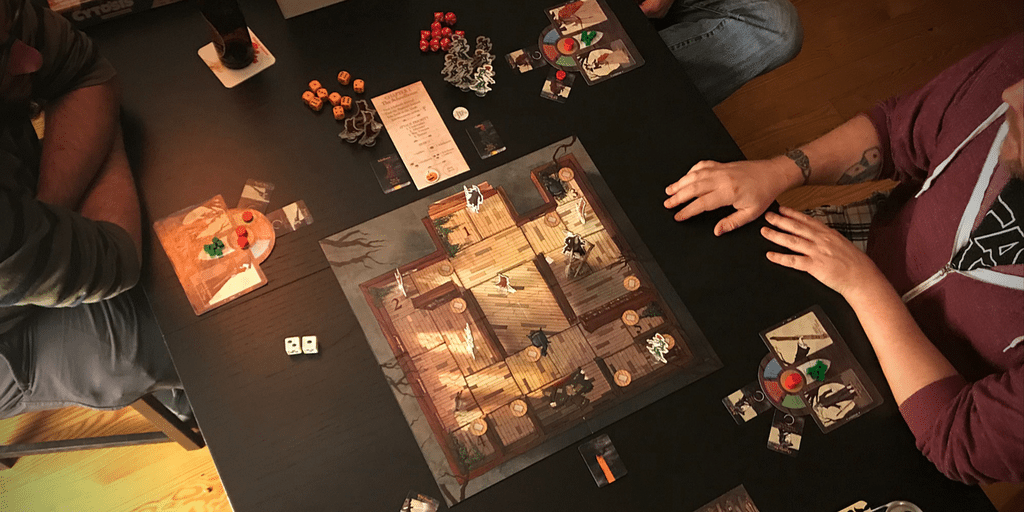 I’m not normally a fan of cooperative scenario-based games like Ben Pinchback and Matt Riddle’s Legends of Sleepy Hollow.

On the tabletop gaming podcast that my friends and I have recorded for over five years, we’ve sought out the Platonic ideal for these types of games. And almost every single one has failed, in our eyes. We think that we’ve ruined ourselves through too many really, really good role-playing game sessions. We’re just not into trying to recreate the feeling of a campaign with a board game.

So when I saw that Dice Hate Me Games was crowdfunding a campaign-based tactical combat game based on Washington Irving’s Sleepy Hollow story, it didn’t really grab me right away.

But here I sit, hours before the Kickstarter funds (already at nearly double its goal), having pledged my own hard-earned lettuce at the altar of punchboard and plastic.

How did I get to this point? Let’s go, item-by-item, through how I found myself backing a game in a genre that really doesn’t typically appeal to me.

Pinchback and Riddle are good designers. I really dig Fleet, their card game about, of all things, commercial fishing. And their awesome post-acocalyptic pick-up-and-deliver Wasteland Express Delivery Service was GeekDad Approved, so say no more.

Chris Kirkman, Dice Hate Me Games founder and the game’s writer, also has a good eye for games. He’s helped bring personal favorites like VivaJava: The Coffee Game, The Great Heartland Hauling Co., and Compounded into the world.

And Dice Hate Me’s parent company, Greater Than Games, is responsible for Sentinels of the Multiverse, and we like that game a lot more than we expected.

My trust in the creators’ track record is what got me clicking over to the Kickstarter campaign, and what kept me there was Abigail Larson’s art. It’s creepy, with lots of character. There’s a Tim Burton-esque vibe to her style, and it fits the spooky theme. I was surprised to find out that this is her first foray into tabletop games, but I highly doubt it’ll be her last. Her work is a great addition to the hobby.

Colin Chan and Ksenia Svincova round out the art team, with Chan doing the maps and Svincova the item cards. They’ve both done a good job of emulating Larson’s style.

I need more miniatures like I need… well, like I need another board game. At this point, I’ve accepted that my painting backlog will probably go with me to the grave, and I experience miniature painting vicariously through Anthony Karcz’s and Robin Brooks’ GeekDad Paints series.

The game contains 39 miniatures, including the four heroes, a horde of evil spooky grunts, some currently unknown characters (no spoilers!), and, of course, the Headless Horseman.

I’m lucky enough to live near Dice Hate Me headquarters, so I reached out to Kirkman and he invited us over to play the first chapter. We discuss it in more detail at the end of this month’s Dice Section, but I’ll say that the turn-by-turn gameplay was more engaging than I expected.

A lot of these cooperative adventure games end up with players doing the same thing over and over again. You blow your special abilities, and then you’re stuck with basic actions. Legends of Sleepy Hollow has a combat system inspired by MMOs like Guild Wars and World of Warcraft, where your special abilities are on a fairly quick cooldown. Depending on the character, that cooldown may be as short as four turns. And the way it’s handled during gameplay is via action pool tokens, which you assign to each action. Once all your action pool tokens are assigned, you refresh, and you can assign them again.

But you’re fighting scary monsters, and that can slow you down. So any time an enemy attacks, you get a fear token that goes into your action pool. This clogs up your refresh, making it take longer before you can perform certain abilities. It’s a simple but elegant system, and it meant that we were all thinking carefully about what to do, every single turn.

To get an idea of how this all plays out, check out this playthrough video of the game in action:

Most of us know the story of Ichabod Crane and the Headless Horseman, so I won’t rehash it here. Legends of Sleepy Hollow starts three days after that, and immediately starts to veer off in an intriguing direction. Ichabod is still missing, and there are clues at his schoolhouse. What’s waiting inside is more than we ever saw in the pages of Washington Irving’s Sketch Book of Geoffrey Crayon, Gent.

Each chapter comes in a sealed envelope, so this game is serious about spoilers. Even some of the miniatures are hidden from view until you have a specific encounter, at which point you come face to face with the new baddie. A cool idea in many ways, but also a great way to get out of having to paint the miniatures. Don’t want to spoil the game!

The base Kickstarter pledge is $69, with free shipping to anywhere in the US or Canada. That’s not cheap. But there’s a lot in the box here. And the game will likely retail for $100, so getting in early fetches a fairly deep discount.

Also, I could take or leave the theme, to be honest. I like Sleepy Hollow as much as the next English major, but it’s not as beloved to me as Lovecraft or cyberpunk or even Terraforming Mars. But I will say that Kirkman has put his own spin on the tale, and the four hero characters all have some pretty cool backstories. A Revolutionary War vet with flintlock pistols akimbo? A massive gravedigger who slams monsters with his shovel? A tanner’s daughter with deadly aim, or maybe a preacher with a big magic stick? Sold.

There’s the usual Kickstarter stretch goals (engraved dice, harder difficulty modes, and a couple of extra chapters) and added bonuses (a second game, Lost in the Woods, about Ichabod trying to escape the Horseman), which are really just icing at this point.

Ultimately, I decided to back Legends of Sleepy Hollow because I like what Dice Hate Me is making, and I love the idea of sitting down with my kids, reading Irving’s short story, and then playing this game. It has a good toy factor, it makes storytelling a key element to the campaign progression, and the aesthetic is right up my alley.

If you agree, head over to Kickstarter and back it quick. The campaign ends today.

Full disclosure: I backed the Legends of Sleepy Hollow Kickstarter and consider myself a friend of Dice Hate Me Games founder Chris Kirkman, but I did not receive a review copy of the game and money did not change hands for this write-up. 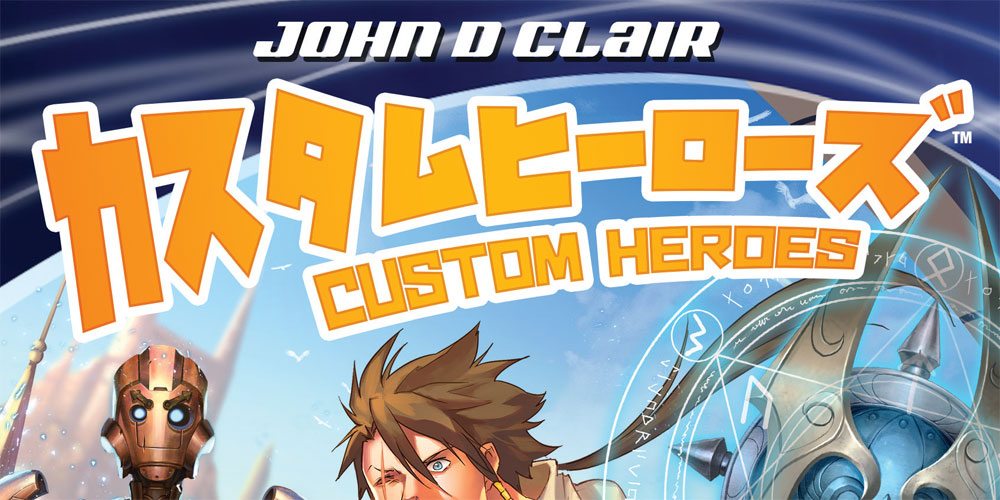 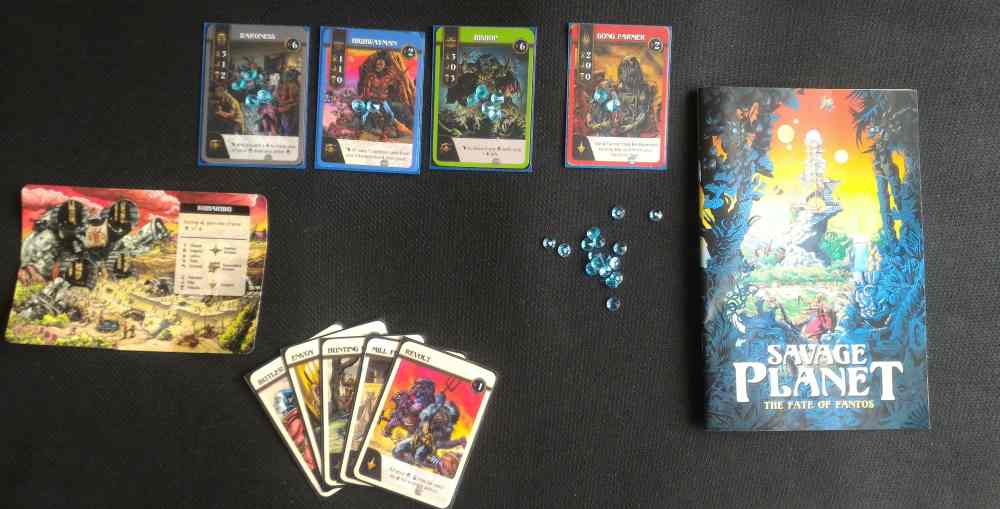