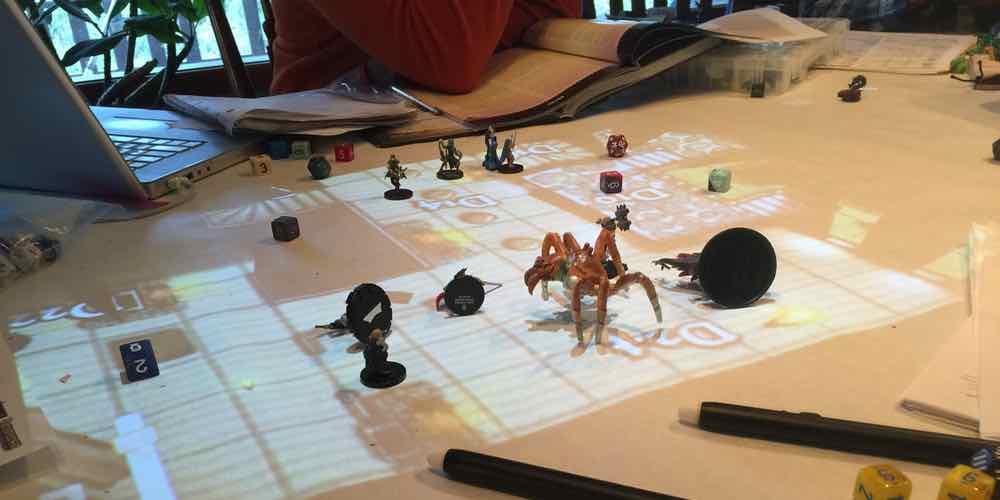 The Touchjet Pond interactive Android based projector can totally transform your gaming table bringing your dungeons, and dragons, into the future. Using the Touchjet Pond projector for my roleplaying games, I was able to present the professionally drawn maps provided by Paizo’s Adventure Paths and interact with them right on the table. Presenting roleplaying maps is just the beginning of what the Touchjet Pond can do though. Controlled with a remote, your smartphone, or two styluses for multitouch, this pico projector can project onto most any flat surface and with built in WiFi it allows you to stream your favorite videos, surf the web, and utilize the many Android phone apps available in the Google Play store. The Pond is $599.99 on the Touchjet site, and is significantly cheaper on Amazon, as well as Best Buy.

After taking this tiny device out of the box and connecting it to my WiFi, I set it on a table facing a wall and was quickly surfing the web using an interactive stylus. Within minutes I lost it to my kid who opened the Android Netflix app and started watching a movie. This gave me some time to check out the documentation and read about the Touchjet Pond.

The Touchjet Pond started out as an enormously successful Indiegogo campaign in 2014 raising nearly a million dollars. In 2015 they ran a second successful campaign for the Touchjet Wave, an android device allowing you to add touch control to your television. Expect a review of the Wave in the near future.

What jumps out about the Touchjet Pond is that it is tiny, roughly 4 inches by 4 inches. You don’t even need the power cable if running off the battery. I got over two hours on battery in my test, plenty long enough to get through most movies. However, for many use-cases, like a five to six hour table-top gaming session, you’ll need the power cable as well.

The Pond is pretty simple. It has an on/off button, a focus dial, port for power (also runs on battery), Micro USB, Mini HDMI, and built in speakers as well as an audio out port.

My son watched Zootopia. The built in speakers sounded tinny, as you would expect from a device so small, but it would be easy enough to boost the sound with some external speakers. He did not complain about the sound in any case.

Once I got it back, I set me off on my original objective, using the Touchjet Pond to make an interactive gaming table. I’ve been seeking a device to project my tabletop roleplaying gaming maps using Roll20 for some time. A ceiling mounted projector is a good option, so using a flexible tripod, and my dining room light fixture, I was able to get the Pond mounted above my dining room table so I could try out some apps.

I covered the table with a piece from a large roll of white paper we use for various projects, including as a table covering for dinner time gaming or drawing. This gave us a good projection surface to try out some games.

Before I hopped into roleplaying options, I tried out some video games. The first one I downloaded was Fallout Shelter, and it worked well. The two styluses can be used together for multitouch gestures, this allowed me to easily navigate the game, zooming in and out, and scrolling as necessary. Again, I pretty quickly lost access to one of my kids when he came over to see what I was doing. He then played Shelter for awhile, and seemed to have no problems controlling the device. It’s always amazing how fluidly these digital natives switch between user interfaces.

The video below shows me learning the ins-and-outs of the styluses. Fallout Shelter is a much better phone app, since it’s mainly about obsessively checking in on your dwellers, but a game like the Carcassonne app would be perfect for the family to sit around the table and quickly play with no need for set-up, or risk of getting dinner on the game pieces!

Please excuse the wrinkled paper in some of the shots. My main roll of paper was not on site when I first fired up the Touchjet Pond, so I had to use an old piece that was a little tapped out. I also didn’t re-calibrate after some projector moves, I never noticed any issue, but sometimes the pen may be off. The camera moved around quite a bit between some of these videos.

I then downloaded and fired up Air Control 2 which was a blast as always. After trying it out, we tried it over dinner as a family game taking turns landing the planes, handing the styluses across when someone couldn’t reach a plane. We would have to sometimes direct the plane half way, then hand off control to someone that could reach the area for the rest of the trip.

This is all using the Touchjet Pond as a stand alone device, no computer necessary. Setup is simple and these games, the web, Netflix, YouTube are all available just from powering up the one device.

Again, my main goal was to use the Touchjet Pond in role-playing, so I fired up the 3D Virtual Tabletop, an app I helped fund years ago, to see how the multi-touch gestures would work with the app.

While the 3D Virtual Tabletop was pretty cool, my primary gaming style is face-to-face and I prefer using our real-world minis. Using Roll20 to display my maps allows me to use Roll20’s fog-of-war, and dynamic lighting to display just the portions of the map that the characters would be seeing at any given time.

Roll20 has an Android app, but the Google Play store reported that it wasn’t compatible with my device, so it would not work on the Pond. This meant I had to use Roll20 through the web. For our first RPG session, I had not yet tried the web app through the Pond browser, so for safety-sake we used the Pond as a standard projector. In addition to being a stand-alone device the Pond can act as a standard projector for any device that can provide an HDMI input (utilizing the provided HDMI-to-mini-HDMI adapter.) There’s no interactivity in this mode. This worked well, but for for our second two sessions we used the Pond in Android-mode exclusively, with no computer, using the dual-styluses to scroll and zoom the maps provided by Roll20.

Sometimes when the table got cluttered, navigation was more difficult, and getting the map the perfect size (1 inch squares) was difficult. This was as much an issue with Roll20 as anything else though. The zoom function on Roll20 requires minute movements on a slider. Such small movements were necessary that were difficult to perform with the stylus. But for the most part I could get around the map, and easily move the lighting sources to show the areas that the characters could see. Again, projecting maps in this way is far better than the typical dry-erase chicken-scratches you typically see in roleplaying. It’s sad that so much great artwork is created and only the GM typically ever gets to see it!

The maps do lose quite a bit of their detail in the projection. The 854×480 resolution did not hamper my viewing of the earlier games, or the Netflix movies, but here it was evident. Not a show stopper, but the maps aren’t as good as they could be with a higher resolution, higher lumen projector. But again, way better than the hand drawn maps we typically have.

In the following video I am using a map that I provided dynamic-lighting data for. I am selecting and moving torches that have been assigned a light radius. As they move Roll20 determines what the light would be illuminating.

The quality of the image is about what you would expect from a tiny pico projector putting out 80 lumens. We were gaming during the day in my dining room which has windows, so not completely dark. I was not able to turn on my dining room light as it shines right where we are projecting, I did bring in some lamps to provide indirect lighting and we could still see our papers without affecting the digital maps. The detail is not as crisp as you’d get form a standard bulb-style projector or laying a flat panel TV on the table. I don’t think this would be adequate in a brightly lit room. You can see in the demos on the TouchJet site that even the classroom situations are in a room with the lights off, or set very dim.

In the images below I projected the 80 lumen pico image next to an image provided by a 2200 lumen traditional projector. While where I chose to set the camera’s exposure of these images has the most effect on the image quality in these photos, this at least gives you a comparison of what the two projectors put out.

In addition to controlling the device with the two styluses, there is an Airmouse included as well as the Touchjet app that essentially turns your phone into an Airmouse. Waving the Airmouse or phone through the air you’re able to control the mouse position, and then you can select, or push various menu buttons.

Again, the primary benefit of this device is that it’s a fully contained unit. Projector and computer all in one. This would be a breeze to take and setup for gaming day, or for your child to take for their slumber party.

At 80 lumens the Touchjet Pond performs best in a dark room, I don’t think I would use this in a business or whole-classroom education situation. Maybe a pull-out group of a few kids or in a small conference room in a dimly lit area. The smaller the screen, the brighter it is of course. Bt the smaller the screen, the smaller your work group should be. This is great for kids on a sleepover and worked well for my gaming around a table in a dim room with six people.

The Touchjet Pond is $599.99 on the Touchjet site, and is significantly cheaper on Amazon, as well as Best Buy.

The Touchjet Pond has some cool features. I love the idea of playing various games around the table as a family, or even sometimes during a meal like we tried. It’s an easy to transport device that kids can use for playing games and watching movies with friends. How cool to be able to build your sheet forts, then easily project a movie on one of the walls.

Does this satisfy my gaming table requirements… very close! While the low-profile, computer-free easy setup, along with interaction directly on the table make this solution excellent, the maps just aren’t as crisp as I want. The cons keep me from saying this is the must-have solution to a projected gaming map. This is however, currently the best solution I’ve used.

LCDs laying flat make a much better gaming table image. With this in mind, next I’ll review the Touchjet Wave. It’s another Android device that transforms an LCD into a touchscreen. I exclusively use projectors for my entertainment systems, so I need to acquire a screen to try this with. I want to again try to use this for my face-to-face RPG maps, with miniatures placed on the map. I don’t anticipate the touch interaction will work as well as the Touchjet Pond. The Pond needed infrared tipped pens to interact so my hands and miniatures did not get mistaken for input. The Touchjet Wave, on the other hand, responds to touch. I imagine touching and moving miniatures will create problems for the Touchjet Wave. We’ll see, be watching for my next Touchjet review! 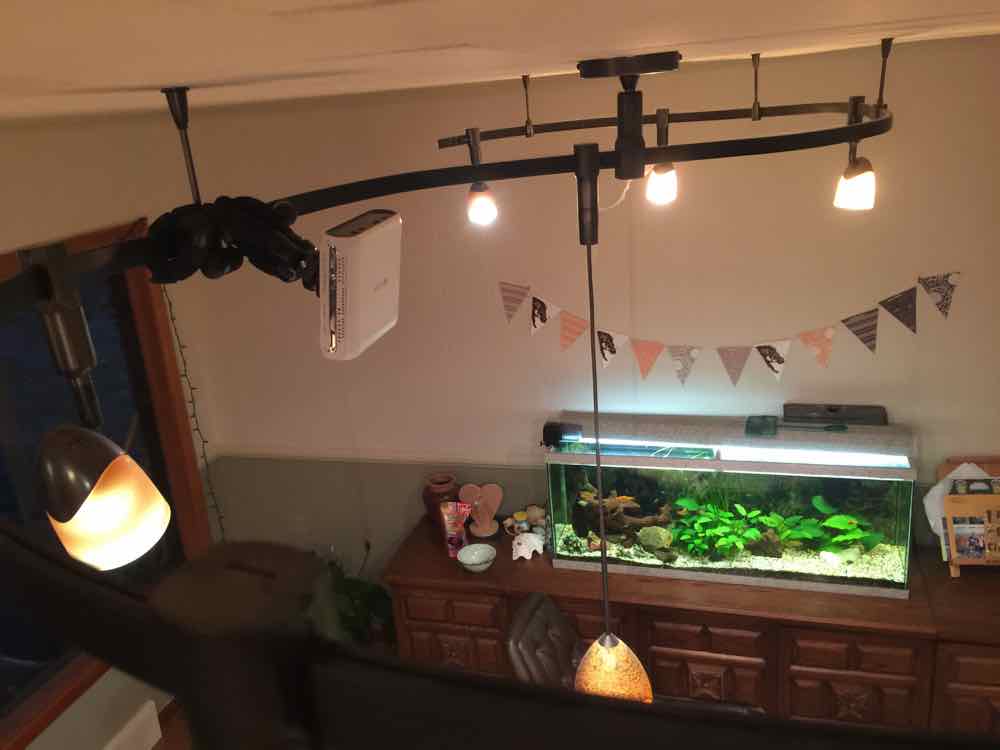