SyFy’s latest competition reality show, Cosplay Melee, premiered two weeks ago, and it is a breath of fresh air to the cosplay community and to cosplay fans after Heroes of Cosplay.

By now, most readers will know me as the GeekDad cosplay guy, so of course I’m watching and enjoying the show immensely. My goal is to cover each episode of the season, and, with any luck, get a few questions answered by each of the contestants as well. There are spoilers below, so if you haven’t watched the episode and don’t want to find out who won or lost ahead of time, come back later!

The format of the show is pretty straightforward. Four contestants are given a theme, “A Night at the Space Opera” in the case of episode one, and start out with an eight-hour build challenge. In episode one, the challenge was to build a helmet or headdress for a custom character from each contestant’s favorite space opera. At the end of the challenge, one contestant is declared the winner (which doesn’t actually have any bearing on the rest of the competition) and one is eliminated from the show as the loser. The second part of the show is then focused on a two-day build for the rest of the character. The complete character is revealed to the judges at the end, and a final winner is declared. That contestant wins $10,000, and the next episode starts with four new contestants. (I’m making an assumption here that all episodes will follow this format since, at this point, only one episode has been released). The host is Yvette Nicole Brown, joined by LeeAnna Vamp and Christian Beckman to judge the contestants.

I already mentioned Heroes of Cosplay, and, despite its detractors and faults, it was a big reason I got into cosplay in the first place. I’d always dabbled a little bit here and there, but it wasn’t until Heroes that I really dove in all the way. That being said, everyone, myself included, was very wary going into Cosplay Melee. I’m very happy to say that all of my fears were for nothing. A lot of reality competition shows create drama, either during filming or, as reported by a lot of contestants, during editing. Cosplay Melee abandons that and uses the tension of time and getting a full build done quickly to create drama instead of having contestants fight against each other. Cosplay is as much about community as anything else, and not having that drama on the show is a much better reflection of the community.

However, the show is not without flaws. A lot of people are not happy with the first-round elimination, but I think we all realize that elimination is the nature of a competition show. However, one of my favorite suggestions for a way to keep the multiple rounds but get rid of the elimination is to have the round one winner get an advantage of some sort over the other contestants and have the loser get some sort of disadvantage. This way we’d still get to see the full build of all four talented cosplayers. (I know I’d love to have seen Alicia’s full Riddick-style armor.)

But that leads directly into the second biggest complaint I, and most viewers, had about the show–it’s way too rushed. As most cosplayers and prop builders know, a LOT goes into making something, and to get three days of building props and costumes into a one-hour show, a lot of things got edited down and cut out. I know from experience there is so much more that happened and that these artists have to show and teach viewers that we are not getting to see. Most of the episode focused on the armor builds, but when the contestants came out at the end, they had also done a bunch of sewing, prosthetics, wigs, and make-up. I think Cosplay Melee could easily be a two-hour show. I know many viewers would love to get more details on materials and tools used, design process, etc. 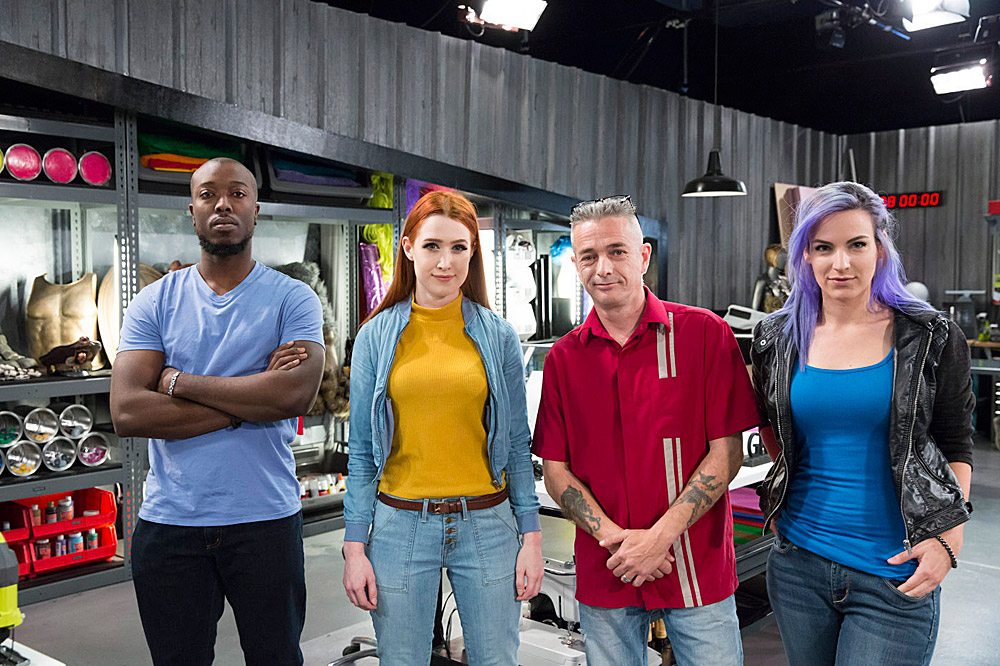 So who were the contestants on the first episode? Xavier of Ebony Warrior Studios; Grace, also known as Zonbi; Fred of Fred and Elle Designs; and Alicia, also known as VertVixen. Alicia chose the Chronicles of Riddick, Xavier chose Star Wars, Grace chose Guardians of the Galaxy, and Fred chose Star Trek. As I mentioned, I’m sorry that we didn’t get to see Alicia’s full build as I think based solely off the first-round challenge, her headpiece was actually the best fit of all the competitors. She seemed to have been eliminated solely because her piece wasn’t a full helmet, but that wasn’t the original requirement.

While all four cosplayers proved to be excellent creative builders, I do think Xavier’s final character and design did best embody his chosen franchise. On top of that, with his excellent build, he definitely deserved to be the winner.

For this first post, I only have the mini-interview with Grace, but hope to cover the rest of the episode one contestants in the future.

GeekDad:
When did you first get into cosplay?
Grace Herbert:
A week before going to my first ever anime con when I was 15, my mom let me know that people liked dressing up as the characters. She offered to teach me how to sew so I could make my first costume. She helped me make a Sakura costume from Naruto and I have been hooked ever since!
GeekDad:
Why do you cosplay?
Grace Herbert:
Cosplay inspires me to constantly be curious and creative. It encourages me to become better at my craft and learn new skills like painting, sculpting, mold making, sewing.

When I go to cons and cosplay, I make life long friends, learn so much, and meet inspiring craftspeople. There is a true sense of belonging and community among other cosplayers. There’s no other experience like it.

GeekDad:
When did you find out you were going to be a contestant and what went through your mind when you found out?
Grace Herbert:
I found out I was going to be a contestant in November of last year. I was beyond excited and humbled to have a chance to work alongside some of the most skilled people in the cosplay community.
GeekDad:
What did you learn about yourself and about your own process from being on the show?
Grace Herbert:
I have never pushed myself to make an entire costume and prop in 3 days before. I surprised myself with how much I was able to accomplish! Being pushed so hard made me feel like I leveled up my skill!
GeekDad:
Has the show inspired you to try a new technique or build something you hadn’t previously considered?
Grace Herbert:
Working with such skilled people has taught me so many new techniques! I wish I could have Fred and Xavier in my shop every day!
GeekDad:
Is there anything you really wanted people to know or see that didn’t make it into the final cut?
Grace Herbert:
There was SO much Shenangians! We had the messiest work area in the series. There was so much getting paint everywhere, exploding materials, huge messes. They were hilarious when they happened, and they were usually caused by us working at such a quick pace. Most importantly, we all got along so well. We bonded so quickly and had so many great moments together. I talk to Fred and Xavier every day, and we already have several coordinated cosplays that we are planning on wearing together at future conventions.
GeekDad:
Do you have any plans to make a final version of the character you created on the show?
Grace Herbert:
I would love to! I’m still thinking of ways to perfect her.
GeekDad:
You mentioned that you’re the only cosplayer on the force (Grace is a police officer), and if they didn’t before, everyone knows now what you can do as far as cosplay is concerned. What sort of reaction have you received from other police officers about your cosplay and being on the show?
Grace Herbert:
My coworkers LOVE what I do! They’re genuinely interested, ask a lot of questions, and they think what I do is really cool. They were so excited about Cosplay Melee they even helped me plan a viewing party. I also get a lot of emails around Halloween because they want advice about how to make cool costumes for their kids. I think it’s awesome it was received so well.

The episode 2 recap and interviews with all of the contestants will be up tomorrow before the airing of episode 3!