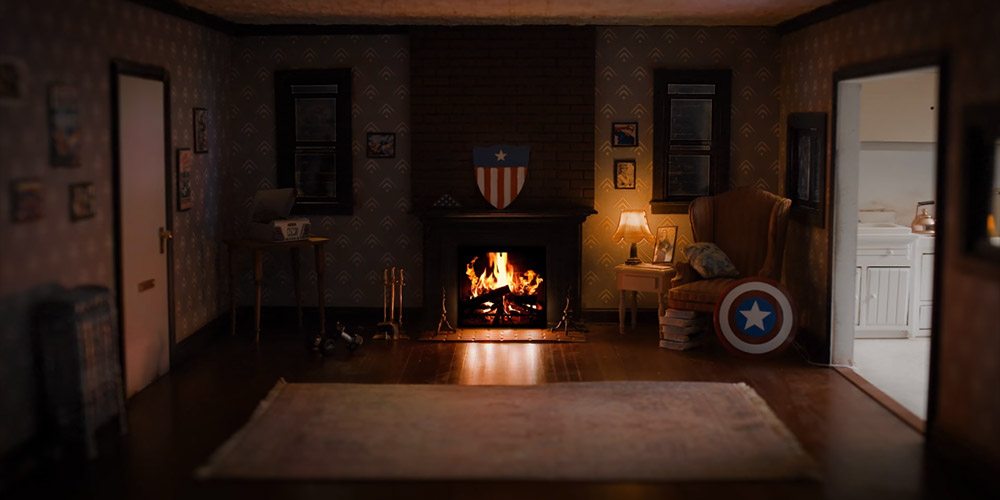 Last year we noticed that there were many new variations on the traditional Yule Log video, so we put together a list of 7 Fireplace Yule Log Videos for GeekDads. Another year has passed, and there are even more non-conventional holiday videos to play on your shiny new 4K screen (or just your iPhone with the sound turned up).

There is no small contribution from Marvel, who just posted five fireplaces as situated in the warm homes of our favourite superheroes. Each video is one full hour of a diorama-style room with a burning fireplace superimposed. Well, in the case of the Guardians of the Galaxy, there’s a warm, pulsing orb. I assume an open fire in a spacecraft is as bad an idea in the Marvel Universe as it is in our own. It does, however, include a periodically dancing baby Groot.

Each of the five themes has a full room view as well as one view zoomed in. Each is partnered with appropriate audio like household noises in Ms. Marvel’s New Jersey home or old timey carols for the Cap (which is my favorite of the collection). The full room videos are available in 4K and the “Up Close” videos zoom into the fireplace and play at up to 1080p. If 60 minutes isn’t long enough for you, both the full-room and zoomed in views have playlists showing off all five rooms in sequence.

The fire in Iron Man’s apartment looks a bit out of place. Thor’s flames sometimes show the edge of the matting. Ms. Marvel’s diorama occasionally shakes out of sync with the fire. I would hope for higher quality from Marvel, but if you’re just running these in the background then they should still help set the mood for the season while kids, dads, and moms play with their new action figures.

Using a photo taken from the Hobbiton Green Dragon (with credit), Virtual Fireplace created this 4 hour video to set the mood while you and your friends share a full pint of your favourite ale.

For that gamer on your list (even if it’s you), imagine opening that Hearthstone Innkeeper’s Stein to the sounds of murlocs carolling. The video is 53 minutes long, and the fireplace is very relaxing, but murlocs are not known for their singing abilities. Funny to listen to at first, it quickly wears on you like that full CD of Jingle Cats. Even so, it’s one of the better looking animated Yule Logs I’ve seen. It’s perfect to play in the background as you command your Warcraft heroes.

It wouldn’t be Christmas Season without a new entry from Lil BUB. Last year’s was a little weird, but this entry returns to the simplicity of a roaring fireplace, a warm blanket, and one of the world’s most famous internet cats purring happily.

If cats aren’t your thing but dogs and horses are, then Budweiser’s choice of fireside companions may be more to your liking.

There’s something magical about sitting back with a warm coffee and watching your kids play. Maybe your kids have grown up and left the nest. Maybe they’re just upstairs with their new video games. Winnipeg-based FlippyCat builds a fireplace and projects a warm flickering glow for you to enjoy. He then spends two hours setting up a domino cascade. The last minute is the satisfying tumble.

One of the most popular non-conventional Yule Logs last year was Nick Offerman sitting by a fire enjoying a glass of scotch for an hour. Rather than try to one-up himself, this year he sits in front of the Lagavulin distillery in Scotland sipping in the New Year. If you still prefer the simplicity of sitting in front of the fireplace with a good friend and a glass of scotch, last year’s entry has been looped and extended for 10 full hours.