My boys are a week away from finishing the school year, and I’ve already got a nice stack of books building for their summer reading. For most of them, I tend to skim to make certain they’re appropriate… but a few have actually hooked me, including some that are part of a series that I have previously reviewed for GeekDad.

Below you’ll find three new books, that might be of interest to your young readers; the first two are continuations in a series and the  last one is a one-off. 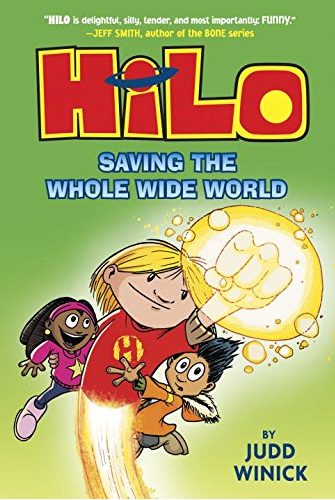 This is the second book in Winick’s new graphic novel series for kids that features a super-powered robot named HILO. (You can read my original review of HILO: The Boy Who Crashed to Earth here.) I want to avoid spoilers here, but Book 1 ended with a big cliffhanger that is easily resolved in the first four pages here, so young readers can get right back to the action. In this book, HILO is having to deal with various portals opening up all over town after his battle with Razorwark, the Big-Bad from Book 1. Out of these portals spill a mix of bad guys and good guys, and HILO and his friends, D.J. and Gina, must race to close them to prevent Razorwark from possibly coming back.

As with the first book, this tale is filled with humor that young readers will love — belches, dumb Knock-Knock jokes, ralphing (puking), and great examples of true friendship. The artwork — the style and coloring, especially — are incredible. There’s a sense of real movement and speed and power in the panels, and this lends itself to a fast-moving storyline that once again leads up to an incredible cliff hanger that will have young readers begging Winick to hurry up and finish the third book, HILO: The Great Big Boom!. 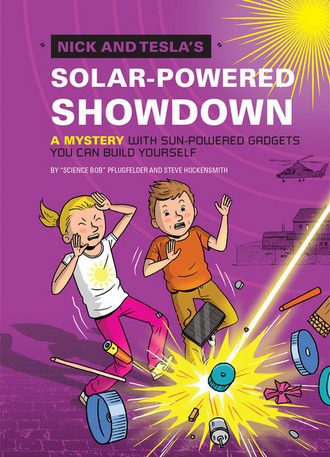 It’s hard to believe that the Nick and Tesla series is up to book 6 now! This has to be one of my favorite series for young readers — the mix of the fiction story with real-world projects to create is genius. Last year (Fall 2015), I used the fourth book in the series (Super Cyborg Gadget Glove) for an after-school science club where all the students actually built the glove described in the story, complete with LED flashlight, loud personal alarm, secret ink reader, and voice recorder — read about the club and project here and here.)

With Book 6, Nick and Tesla are back again to put their science and gadget-building skills to the test. For the first five books, a larger mystery has been building about Nick and Tesla’s parents, and this story brings that mystery to a close as the twins build a number of gadgets that rely on the Sun to help them overcome obstacles and deal with a bad guy. In this book, readers will find an exciting story as well as plans to build five new projects — the Guaranteed-Not-To-Explode-Frankfurter-Heater-Upper, a Ping-Pong Ball Signal Cannon, a Solar Spy Birdhouse, the Solar-Powered Long Range Rover vehicle, and a Sun-Activated Alarm Clock/Villain Distractor.

This series is perfect for summer reading and hands-on projects, but I highly recommend starting with Book 1 — Nick and Tesla’s High Voltage Danger Lab — for a better grasp on the larger story. (You don’t have to have read all the previous books to enjoy this latest release, but the story will make much more sense.)

Josh Baxter Levels Up by Gavin Brown (out now) 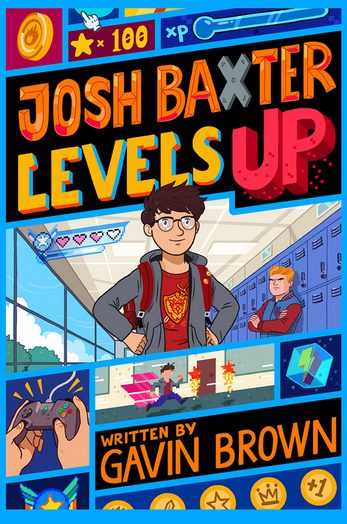 My 9-year-old is really into video games right now, so after spotting this book on the shelf at the bookstore, I sat down and read the first few chapters to check it out. What a great find! Josh Baxter is the (at first) hapless hero of the story — he’s found himself at a new school after his mom has to relocate them for work. At Howard Taft Middle School, Josh finds himself on the first day dealing with a bully, putting his lock on the wrong locker (and forgetting the combination), and wandering into the girls bathroom during gym class (thankfully before anyone really notices, but leaving his change of clothes in there!).

Josh sees life through videogame-colored glasses, and he constantly finds himself in situations where he asks himself what famous videogame characters would do in the same situation. Of course, he’s not a videogame hero, so Josh must deal with issues as best as he can as a normal under-powered kid. But that’s not good enough for Josh! Instead, he comes up with a plan to turn his life into a series of challenges where he chooses to level up.

Each chapter begins with a short ‘character sheet’ showing Josh’s stats — his Health (he loses Health on Day 1 after the bully encounter, for example), his Lives, and New Skills Unlocked. As the book progresses, the reader will watch as Josh moves from a Level 1 NOOB to Level 7 Pencil-Slinging Hero. Josh awards himself XP and tracks it, all the way from arrival at his new school to finding and making new friends to joining a team to compete against the bully (and bully friends) in a school-wide videogame tournament. I really liked the book’s message, with Josh taking control of his own destiny and deciding enough is enough, and I think many young readers will find the story inspiring.

Pleo’s Meteor Arrives in the Form of a Recession