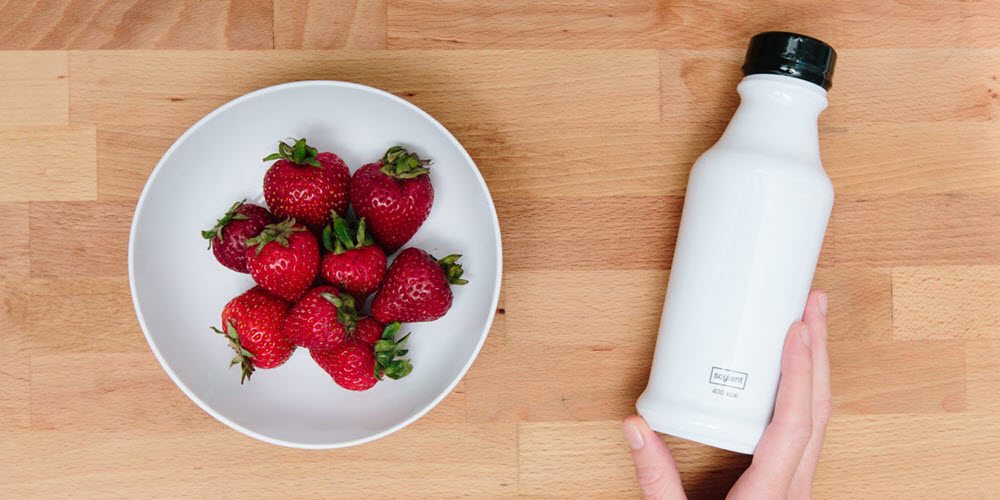 When I reviewed Soylent 1.4 last year, I came away impressed that something cobbled together by a software developer to avoid having to subsist on fast food during long coding sessions was actually good enough to be a partial meal replacement. As the year went on, though, I found myself hitting my supply of Soylent less and less. As convenient as it was, having to mix or blend up the mix became enough of a an impediment that I would dismiss Soylent and grab a handful of nuts if I was running late and needed some quick nutrition.

Then I found out about Soylent 2.0, Soylent’s pre-mixed supplement. Each aggressively minimalist recyclable bottle contains one-fifth of your daily nutrient needs (based on a 2,000 calorie daily diet). All you have to do is stick the box in the fridge and grab a bottle when you need it. No mixing required. The servings aren’t quite as dense as the powder (now at version 1.5); but I actually find that to be a benefit. The 400 calories per bottle is just enough for me for lunch, the 500 calories per serving of the powder inevitably left me feeling overly full for a while after eating.

But how does it taste? Unlike the powder, which I could never seem to mix enough to get rid of the grit, 2.0 is consistent and smooth. It manages to toe the line between sweet and savory without being too overbearing in either direction. You’ll know that you’ve had something to eat; but it doesn’t smack you in the face with any particular flavor. Sometimes, after having a Soylent 2.0, I’ll be full; but the part of my brain that was looking for food in the first place isn’t quite satisfied. A few almonds is enough to shut up the “that was nice, but where’s the food?” voice.

For me, the nutritional release for the afternoon is nice and measured, without the gut hit that a heavy lunch can often bring (and resultant 3 PM exhaustion). I definitely don’t feel hungry and it’s a lot easier to avoid the random sweets and treats that seem to pop up in an office environment. Maybe because of that, or maybe because my caloric intake is a bit more regulated, I’ve dropped a couple of pounds since I started drinking Soylent regularly. Oh, and the gastrointestinal problems some people had with Soylent 1.4 and earlier? Either my system responds better to 2.0 or they’ve eliminated the issue, because my gut doesn’t grumble at me at all.

I do end up having to supplement in the late afternoon/early evening with an apple, just to get me through my workout or over the hump to dinner. When the satedness from the Soylent 2.0 wears off, it wears off fast. And that actually makes sense, considering if I was totally supplementing my nutrition with Soylent, I would need to drink four-five bottles a day to maintain a 1,600-2,000 calorie diet. So an early bottle before noon would need to be followed by a mid-afternoon serving before dinner in the evening.

While it’s an intriguing notion to replace all my meals with Soylent, as the cook for a family of four, it’s impractical in practice. Besides, I love food, I love preparing it, and I have a pretty good idea of what I can make that’s good for me. But for those days when I feel like I have to be in a million places at once and don’t have time to think, let alone eat, Soylent 2.0 can provide some needed nutritional respite. A total Soylent diet is more for those who don’t have the time or don’t know how to prepare meals that give them the proper nutritional balance. It’s relatively cost-effective as well, about $350 per month for one person for the max subscription of 144 bottles.

I appreciate that Soylent has not rested on its early success and continues to tweak and improve its product to better reflect what its customers are looking for. Soylent 2.0 eliminated that last preparation hurdle for those who want as little to do with their food as possible; but need something balanced and nutritious. Even if all you do is use it to save you at the office on those days when there’s nothing to bring for lunch (or you don’t want to go out), Soylent is an effective meal replacement. The easiest way to get this grab-and-go parent chow is directly from Soylent (there are Amazon sellers, but they jack the price up). I was so convinced by the test case that Soylent sent, I signed up for a subscription so I could continue to have it for lunch during the work week. If you tried Soylent 1.4 or 1.5 and weren’t convinced, give 2.0 a shot. And if you’re just curious if a “post-food” meal option makes sense, grab a couple of bottles and try it out. I think you’ll be pleasantly surprised.

A Surprise for This GeekMom – Playmobil Is for Older Kids, Too!

Change Perspective With ‘On Writing’ by Stephen King