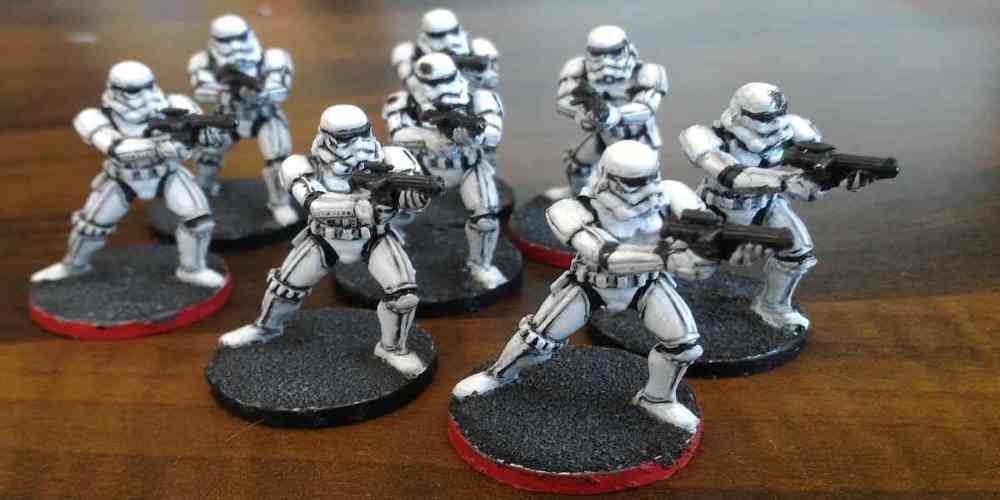 At the beginning of the year, I wrote about my children using their Citadel Space Marines as action figures, and how they’ve enjoyed painting them too.  This has rumbled along through the year and now includes my three-year-old painting some plain white plastic Hasbro Star Wars figures that we had lying around.

In order to join the fun I broke out my Imperial Assault miniatures. My inspiration for this was Anthony Karcz’s GeekDad Paints! series, which is one of my favorite regular columns here on GeekDad. It is Anthony’s vision that he won’t be the only GeekDad painting the village, and I am hoping to add the odd irregular column to the series. Anthony paints a lot faster than me! (Whilst I’ve been putting this article together, Michael LeSauvage, another GeekDad, has been painting some Memoir ’44 minis too.)

My journey to miniatures painter is (maybe) an interesting one. I am terrible at art. Useless. When I draw things for my youngest, my wife often can’t tell which of our children drew it. Yet, I am able to paint to a reasonable standard. In the words of the great Sorastro (more on him in a moment), I “won’t be winning any painting competitions,” but I can paint well enough that people who don’t know very much about the hobby think my models are pretty good. “Through ignorance comes perceived greatness,” is my painting motto.

As a fledgling Warhammer player, my painting was awful. I ruined many dollars worth of lead-based pewter. My dad, on the other hand, was pretty good. He had his own vast collection of Napoleonic figures, which he’d painted in his time before children. I loved nothing more than going through his shoeboxes with him, learning new words, like fusilier, dragoon, and grenadier.

This was in the days when water based paints were in their infancy. It is perhaps not unreasonable that 10-year-old me was unable to get to grips with Humbrol enamels and paint thinners. Yet, as I got older, and the paints easier to handle, my painting was still rubbish.

When I hit my late teens, two things clicked together. First, and most importantly, the thing I say over and over to my children as they paint, “Take your time.” It was much easier for 18-year-old me to understand that no prizes are won for finishing your figures in a day. The second element of my painting improvement was a piece of paper covered in my spider’s crawl handwriting.

This was a color chart that I’d copied out from a White Dwarf magazine. It had three columns,”Base colour,” “Shade,” and “Drybrush,” and detailed all the Citadel paints and how to shade them. I used this religiously for a number of years. I struggled to find opportunities to play during this time, so painting was the outlet for my tabletop geekery.

I was never a brilliant painter, but this simple list was invaluable in helping me reach a decent standard. Suddenly, with a bit of patience, miniature painting became a 3D coloring book. Stay in the lines with each of the steps and the results were more than acceptable.

Then came the wilderness years of marriage and young children.

This year, inspired by Anthony, my kids’ interest in 40K, and an impulse purchase of Imperial Assault, I’ve broken out the paints again. My tattered piece of paper is long since gone, but there’s been this amazing invention since I was last seriously into painting: the internet.

Now advice and tutorials on how to paint are in abundance. The finest of these, I’ve found so far, is “Sorastro’s painting series,” which Anthony has mentioned and I have used religiously in my painting renaissance. Sorastro’s calm authoritative tone and clear instructions could convince anybody they can paint. I started with episode 1, that seeming like a good place to start, and because the series kicks off with Stormtroopers.

I’ve now painted 8 Stormtroopers, 4 Royal Guard, and Darth Vader. Since I last painted, techniques have moved on. This has been my first introduction to “layering.” Layering is a method for building up highlights on your miniatures by adding successive thin layers of paint. This builds up the intensity of color on the areas of a figure most likely to catch the light. Where, in the past, I would have used a drybrush, the challenge now was to build up the highlight effect with many applications of thin layers of paint.

This is not only time-consuming, it adds a great many steps in which you can make an almighty mess of your miniature. I can definitely see the advantages of using the Army Painter “dip” method (explained here), which does most of your highlighting for you. Still, I wasn’t in a hurry, and I didn’t have any of the dipping sauce, so I tried fully layering, under the tutelage of the patient and tireless Sorastro.

I am pleased with my efforts, though I do wonder whether the layered finish is enough improvement for the significant extra time required.

I won’t go over my Imperial Assualt painting exploits too much, Anthony has covered these figures already, but I will point out some pitfalls I’ve encountered and things I’ve learned along the way.

I don’t just want to follow in Anthony’s and Sorastro’s footsteps (brushstrokes?). What can I bring to the GeekDad paints series that is a little different? Well, if you’ve followed my posts you know I have more than a passing interest in Games Workshop and Citadel miniatures. I’d love to paint some of their newer figures. I have the new Lost Patrol game, that I will be reviewing shortly, and that has a number of miniatures to paint. This includes Games Workshop’s iconic, Geigeresque Genestealers. I’ve always wanted to paint some Genstealers and now I have the chance.

I have also recently discovered Knight Models Batman Miniatures Game. The figures for this look amazing and the opportunity to paint Batman and Robin is too good to pass up. I have Batman, Robin, and The Riddler to paint, and I’m looking forward to doing so. Painting without Soarastro’s guidance is a little daunting, but I hope to transfer some of the techniques I’ve learned from watching his videos. The Riddler looks particularly problematic. The official paint job positively glows with a vibrant green nimbus. I have no idea how to recreate that.

After that, who knows? There’s plenty more Knight Models to paint, including its Marvel range, and Games Workshop has just released Warhammer Quest: Silver Tower, a game I’m hugely interested in, that comes with a beautiful set of miniatures. I’ll be a less frequent paint poster than Anthony, but I hope you enjoy my posts as much as his. Until next time, happy painting! 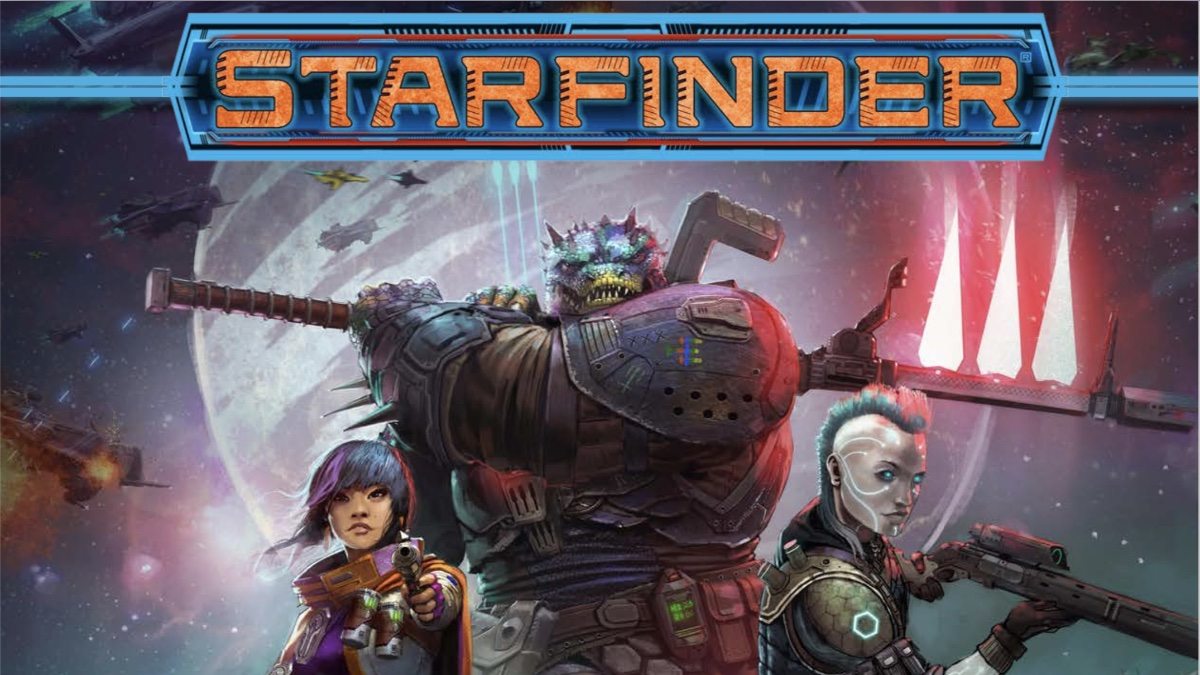 New GM Chronicles: How ‘Starfinder’ Convinced Me to Become a GM 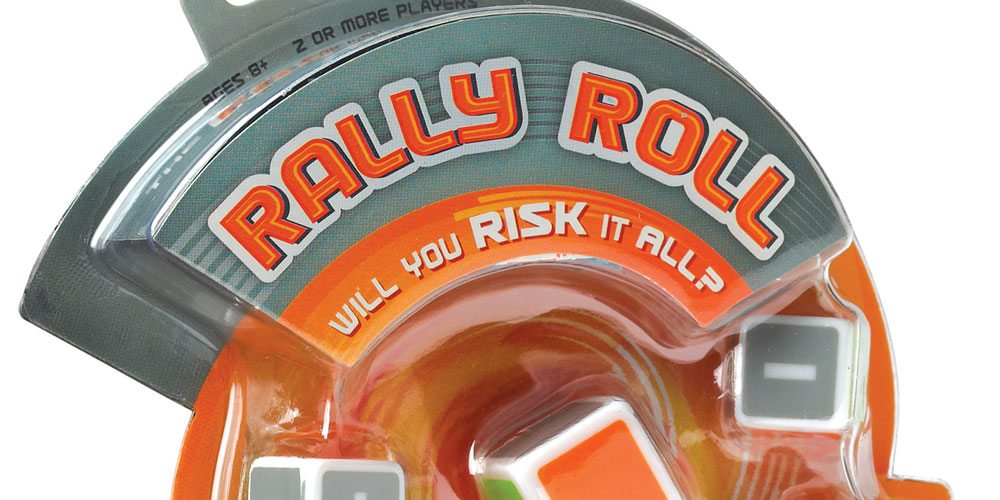 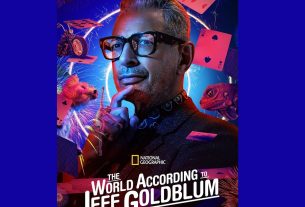