The team is in a bad way after leaving Star City 2046. Mick is still upset with Snart for knocking him out and dragging Mick away from the home he found among Star City’s derelict buildings and dystopian gangs (or is that dystopian buildings and derelict gangs?). Rip is floundering; without a much-needed firmware update from Vanishing Point, Gideon can’t get a lock on where or when to look for Savage. Rip’s out of ideas.

So, Rip spends a week or so (how does one measure time from inside a time vortex?) replaying a holo-message from his wife and son. Rip was off being a Time Master while London burned. We know that Rip wasn’t there when Savage killed Miranda and Jonas. Where was he exactly and what was he doing?

The isolation aboard the Waverider has Mick pacing like a caged tiger. He’s ready for some action and finds it when the team receives a distress call from a disabled Time Master ship, the Acheron. Heedless of the danger in doing so, Rip takes a small team consisting of Mick, Jax, and Professor Stein to the Acheron in order to get the information that Gideon needs in order to find Savage again.

While this series is full of sci-fi tropes (superheroes travelling through time), it was nice to see the space part of space and time being addressed in this episode. What’s the point of having this big, sleek ship if all your doing is the same thing that Barry Allen and the Reverse-Flash have managed to do without any such vehicle? 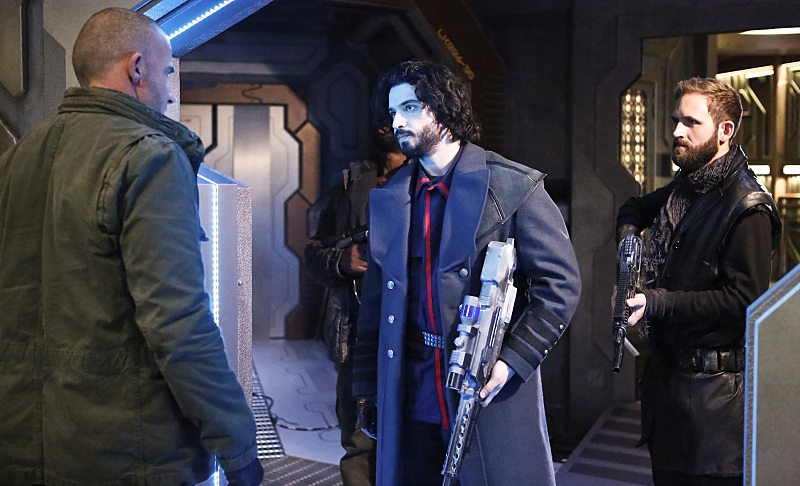 The story splits us up into various small groups. The away team is immediately ambushed aboard the Acheron by time pirates who have taken the ship. After giving Gideon a set of coded verbal commands that allows the Waverider to disappear from the pirates–was that a Kanjar Ro reference in there?–Rip, Jax, and Mick are locked in the brig with the Acheron’s captain, leaving Stein to play space ranger and lead the rescue operation.

The Waverider is compromised during the attack. A hole is blown into the hull of the ship. Snart and Sara rush off to seal the hole, but are trapped in the hold while the icy repair job does nothing to stop the freeze of deep space from creeping into the ship. Snart asks Sara what it is like to die. Sara says the worst part is being alone, and even though she doesn’t like Snart, at least she’s not alone this time when she dies. Death foreshadowing… you just know with all this morbidity that someone had better pay the piper in this episode. 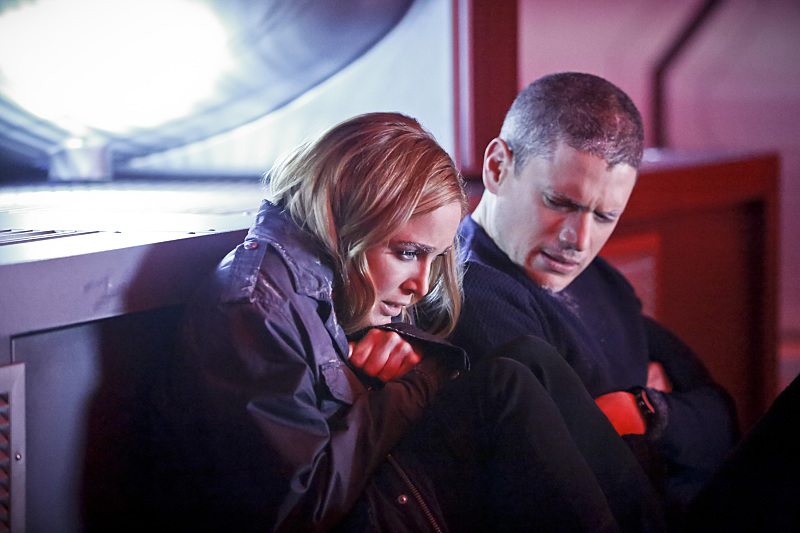 That leaves Ray and Kendra to find a way to seal the hole and save their teammates. Ray uses the Atom suit to venture out on a little spacewalk to repair the damage, which the suit was never designed to do. Things get dicey as Ray starts to black out from lack of oxygen, but he manages to repair the Waverider and get back aboard before going into cardiac arrest. Again, we’re facing the prospect of one of our team of legends dying, but Kendra revives Ray with a few double axe-handles to the chest. Death cheated again. There will be ramifications! 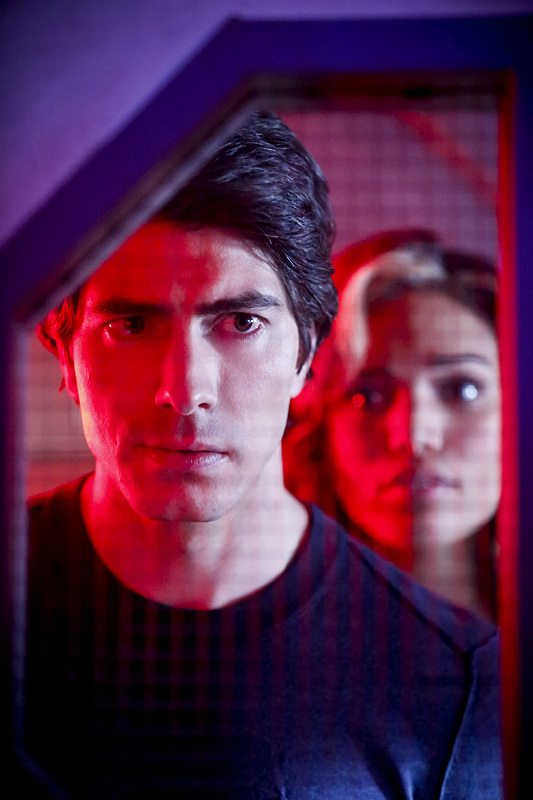 Meanwhile, Jax fails at attempting to hotwire the lock on the brig’s door. Mick tells Jax that it isn’t the kid’s fault. That blame belongs to Rip. Rip (ahem) rips into Mick, telling him that the only reason that Mick was brought on this trip was because Rip knew that it was the only way to get Snart to agree to come along. The two were a package deal.

Finally, Rip said something that makes sense. As Snart has told Sara, he is the level-headed one that balances Mick’s fury and aggression. Snart has been the one who has refused to leave a teammate behind. Snart is the one running toward danger. Snart has been the one to think on his feet and improvise a plan on the fly. Snart is the one who should be calling the shots, not the Time Master who failed to save his family, failed to save the world from Vandal Savage, and has gone rogue. 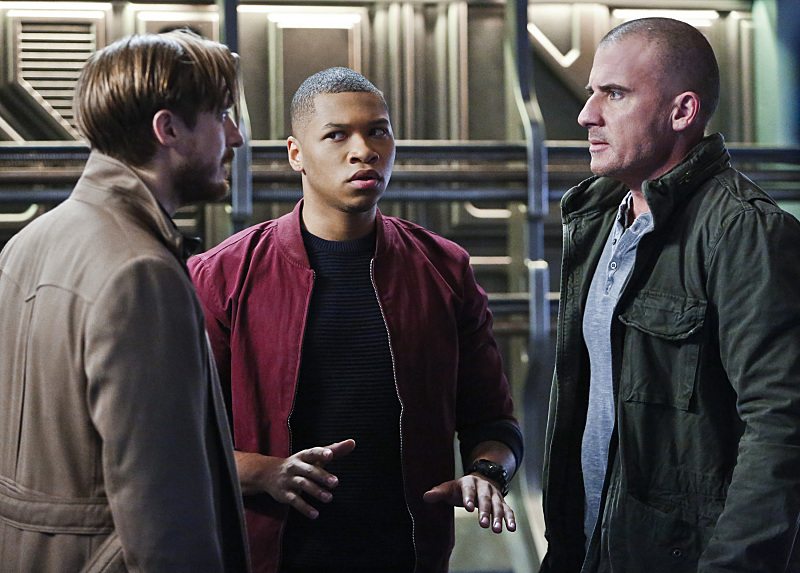 While the rescue team is surrounded by pirates on the Acheron, those aboard the Waverider fare much better. Rip manages to save Jax, Stein, and the Acheron’s Captain Baxter by using a trick that his wife taught him during their time together as Time Masters in training. On the Waverider, Ray, Kendra, Snart, and Sara deal with the invaders. 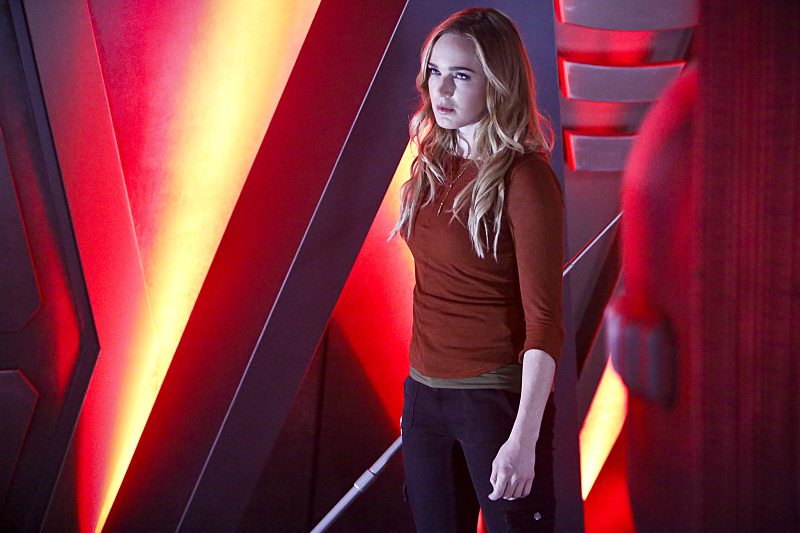 Sara reaches Mick in the engine room, where the two brawl before Mick gets the upper hand and tells Sara he’ll only kill her “a little bit”. Another death reference. Mick tries to fry Sara, but Snart gets the drop on his partner. Once Mick is locked away, the rest of the team gathers to decide what to do with him. They can’t leave him in the brig. They can’t let him wander the ship. They can’t return him to 2016, where Mick would be free to hunt down the loved ones of his estranged teammates and kill them out of spite. Snart says Mick is his partner, he’ll handle it. Stein asks if Snart is going to kill Mick, which elicits a repeat from Snart. “I’ll handle it.” Again, planting that seed that someone is going to die here, right up until the end.

The episode ends with Snart and Mick, alone, somewhere in the woods in an undisclosed place and undisclosed time. It appears that somehow, while Mick was locked in the Waverider’s brig, Snart knocked Mick out again and dragged him here. Mick tells Snart that there is no way he’ll kill Mick. That Snart doesn’t have the guts, but he’d better find some quick, because only one of them is making it out of this alive. Snart agrees with his old–maybe his only–friend, then blasts Mick with the cold gun. 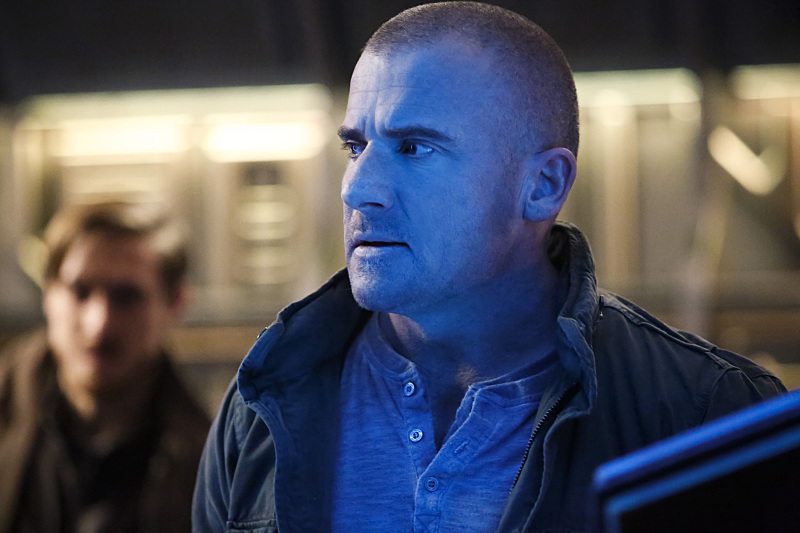 Now, what to make of this scene? As laid out above, Snart’s not the kind of guy to leave a teammate behind. Even when things were bleak, Snart told Sara that he was sure that Mick was the one putting the hurt on the pirates over on the Acheron. He believes in his partner. Snart is also a master of improvisation. I swear I thought that when Mick led the pirates aboard the Waverider and Snart got them to chase him, Ray, Kendra, and Sara through the halls that it was going to be part of some plan that he and Mick had ran in the past.

Anyhow, I don’t think that Snart killed Mick. We never saw Mick killed by the cold gun. Not even hit by its frigid discharge. We were led to believe all throughout the episode that someone was going to die, and the way that the conversation went right before this scene (what to do with Mick) and the way this scene was staged, its easy to chase mindlessly after the white rabbit and believe what the writers and producers want you to believe, that Snart killed Mick, in spite of the fact that everything that has happened up to this point stands contrary to that idea.

This episode is titled “Marooned”, and it’s easy to associate that with the Acheron. I think it is just as likely that the title refers to the bigger shock/twist at the end of the episode, that Mick is now “marooned” somewhere in time by Snart in order for whatever plan Snart has pulled out of his hat to pay off down the road. It gives Mick time to cool off and “pick a side”, as Snart says.

Assuming that the scene follows directly from those before it. Again, we’re dealing with travel through space and time. We’re in a generic spot in the woods in an unspecified time. This scene could be long after, or it could even come before this episode. This might be the result of actions yet to play out in the future, or it might be Snart telling Rip to take he and Mick back to an earlier dispute in order to set things right with the team now.

Only one way to find out, I suppose…