Back in the early ’80s, I attended a local gaming group that met in an upstairs stock room at the nearby Sears. I was 9 or 10 at the time, and this was how I was introduced to RPGs such as D&D, Metamorphosis Alpha, and Top Secret among others. It wasn’t too long before a group of school friends and I were playing on our own, but, for a short period of time, the Sears gaming tables were the only gateway I had for reaching these fun new worlds.

My memory is a bit fuzzy when it comes to D&D adventures at Sears, but I’m 90% certain that one of the adventures I played came from a company called Judges Guild. It was famous for being the first to create adventure “modules” that were basically pre-generated adventures for the DM to run, providing maps, visual aids, and, of course, traps, loot, and new monsters. It would be a while before TSR (owner of D&D) would release its own modules, starting with the pastel cover versions, so Judges Guild gets the full credit for developing the idea of pre-packaged adventures.

While I’m pretty confident I played one of the Judges Guild adventures, I’m a little fuzzy as to which one. First, the covers had these unique color schemes… and that’s the most prominent image I have in my head. My gut is telling me it was Citadel of Fire… there’s just something about that cover that rings a bell in my mind, and the mix of towers and dungeons as well as the mention of a minotaur in the adventurer’s description are all vaguely familiar. 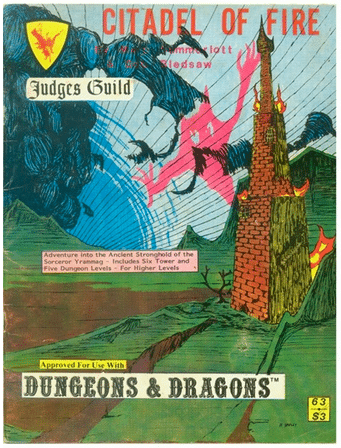 Judges Guild adventures are fondly remembered by older D&D gamers, but with 40 years now passed since the JG adventures’ initial release, these artifacts of the golden age of fantasy RPGs are getting harder and harder to find… especially in good condition. But Goodman Games is looking to change that.

With its new Kickstarter, Goodman Games is collecting three of the original Judges Guild adventures (Tegel Manor, Thieves of Fortress Badabaskor, and Citadel of Fire) in an oversized hardback edition that will also include interviews, cover variation comparisons, some essays on JG (one being from Jon Peterson, author of Playing at the World), and scans of the original games and a handful of the Judges Guild Journal newsletters that have been cleaned up for better reading. And since it’s a Kickstarter, there are also stretch goals that are being developed to improve the book–one suggestion being considered is oversized maps from the three adventures tucked into an inside cover flap, for example. 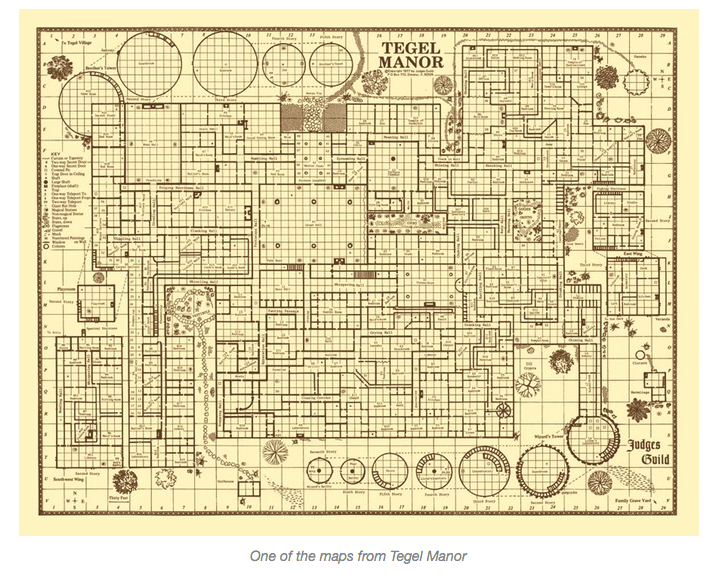 The book will be printed at 13″ x 18″–HUGE! But this will allow the journals to be reprinted at their original size as well as allow for some amazingly detailed reproduction of the maps, including a full color scan of the original Tegel Manor map that is legendary in the JG and D&D world. The book will include a ribbon bookmark, color dust jacket, a full-color slipcase, and more. It’s going to be an amazing historical record of Judges Guild and the early days of pre-packaged adventures, and it’s already made its $40,000 funding goal after only a few days.

You can read all the details and get much more information about the book and stretch goals at the project’s official Kickstarter page. There are some fun videos to watch, and be sure to check out the Updates for a few links to some podcasts with additional background and interviews. There are also opportunities to buy softbound versions of the JG adventures as add-ons if you don’t want to run the adventures from the giant hardbound version. 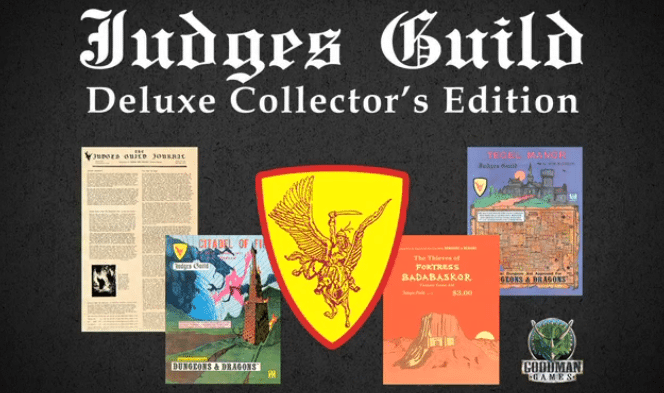 Goodman Games has a solid reputation for delivering some great Kickstarter projects. I love my over-sized Metamorphosis Alpha Collector’s Edition hardback with interviews, extra content, and articles in addition to the enlarged and cleaned-up reprint of the 1st edition rules… and I have no doubt I’ll enjoy every page of the Judges Guild Deluxe Collector’s Edition.

Note: Speaking of Metamorphosis Alpha, I’ll be running an MA game at GenCon 2016 for Goodman Games titled “Expedition to Docking Bay G.” It’ll be a 1976 rules game, with plenty of fun and surprises for six players, and it will run about four hours. If you’re an MA fan and are attending GenCon this year, think about signing up for it. MA was the first RPG I ever played, so I’m making this adventure something even MA novices can play; basic rules will be taught with no previous MA experience required.

3-D Movies And Televisions And Computers And Games And … Enough Is Enough!