As 2015 comes to a close, fellow GeekDad film writer Rob Huddleston and I have selected our individual lists of the 10 best films of the year. Unlike last year’s list of the “Best Geek Films,” this year we went the more traditional film critic route, opening up our picks to include any film released in 2015, regardless of genre. That said, some of our picks are absolutely not kid friendly, so be sure to do your research before watching some of these with or around your kiddos.

So, without further ado, here are our lists of the top 10 films of 2015, complete with some insight on how and why each of us made our picks.

Both of the top picks on my list, Fury Road and The Force Awakens, are large-scale franchise films. I think that says something about the strengths of a well-done sequel. With Fury Road, Director George Miller returned for the fourth film in his Mad Max series, this time casting Tom Hardy as the titular character. Miller’s masterstroke, however, was handing off the weight of the film to Charlize Theron as Imperator Furiosa, a new character who stands out as perhaps the strongest in the series. It’s this single stroke of genius, along with Miller’s insistence on using practical effects and stuntwork that truly sets the film apart from any other this year. You can hear my complete review of Mad Max: Fury Road on the Hey You Geeks podcast.

The other big franchise film of 2015 was Star Wars: The Force Awakens. Perhaps you’ve heard of it. J.J. Abrams’ approach to the Star Wars Universe is different from Miller’s approach to his Mad Max series. Abrams and Disney rely heavily on fan service, something that’s been criticized by some and praised by others. For me, the fan service is fun, if not sometimes distracting, but the real key to the film’s success lies in its new characters. With the creation of Finn, Rey, Poe Dameron, Kylo Ren, and BB-8, Abrams and company have revitalized the Star Wars franchise with new life. The complexities and arcs of these new characters are compelling, but it’s the strengths of their performances that truly make them instant classics for generations of fans old and new. You can hear my complete review of The Force Awakens on the Dadawan podcast.

My third pick is by far the most original and visionary on the list. Charlie Kaufman is hands down the most creative and interesting screenwriter working today. From Being John Malkovich and Eternal Sunshine of the Spotless Mind to his brilliant writer/director debut with Synecdoche, New York, Kaufman has always found new ways to construct human emotions within the fantastic. Anomalisa is no different, framing its characters in a fully (and beautifully done) stop-motion world where the animation is not only essential to his story, but miraculously effective in creating the most human film of 2015.

I love Kaufman, but when it comes to directors, Spielberg is the master. That said, it was no surprise that his thrilling Bridge of Spies turned out to be one of the most interesting, exciting and engaging films of 2015. What was a surprise, however, was that even beyond Fury Road and The Force Awakens, 2015 was an absolutely superb year for science fiction. Alex Garland’s brilliant and intense Ex Machina took us to some deep, dark layers of artificial intelligence, while Ridley Scott once again proved his mastery of sci-fi by stranding Matt Damon on Mars in the most wonderfully geeky film of 2015, The Martian. 2015 was also a great year for horror, with David Robert Mitchell’s relentless sex parable, It Follows, leading the pack.

Closing out my list are two films which showcase some of the best performances of 2015. Lenny Abrahamson’s Room exists in the bleakest of scenarios, but, thanks to absolutely transformative performances by Brie Larson and newcomer Jacob Tremblay, somehow seems to become one of the most uplifting films of the year. Tom McCarthy’s Spotlight isn’t so uplifting, but the cast, led by Michael Keaton, Mark Ruffalo, John Slattery, Rachel McAdams, and Liev Schreiber, lift this very true-to-life accounting of the Boston Globe’s uncovering of the Catholic Church sex-abuse scandal to what I predict to be the frontrunner for the Best Picture Oscar. My final pick is the best family film of the year, Pete Docter’s Inside Out.

My honorable mention films for the year include Me and Earl and the Dying Girl, Rocky sequel Creed, Kumiko, The Treasure Hunter, and Tarantino’s The Hateful Eight. 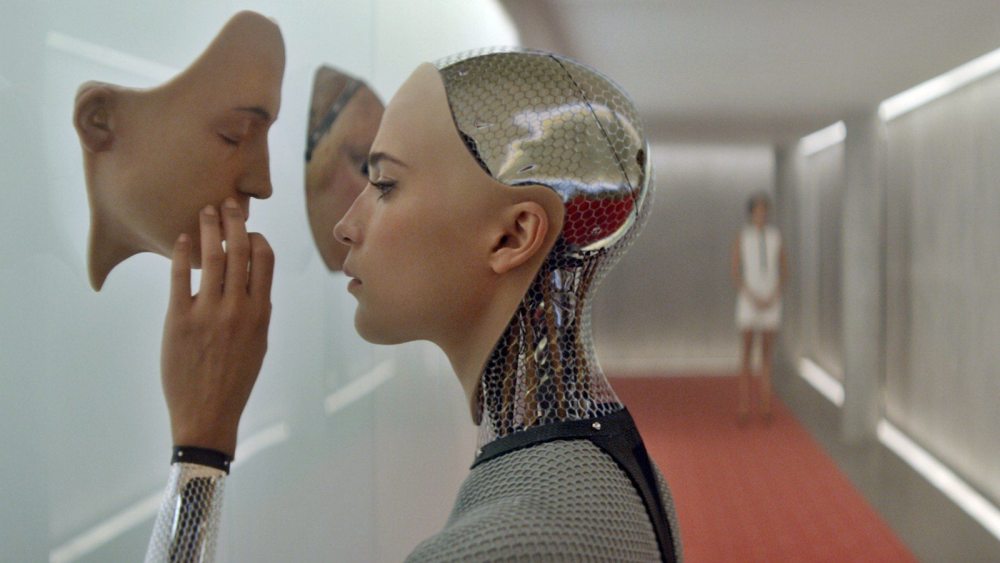 It’s rare that I hit my favorite movie of the year early on, but movies like Ex Machina just don’t come along that often. Not only is it my number one film of 2015, but it’s easily one of my top ten favorite movies of all time. It’s also the first movie in many, many years that I’ve seen in the theaters more than once just because I wanted to see it again, and the first movie I’ve purchased on Blu-ray in longer than I can remember. It’s beautifully shot, has a magnificent score, and the acting from all three leads is spectacular. Alicia Vikander earned a Supporting Actress nomination from the Golden Globes for the movie, and I won’t be surprised to hear her name read off by the Academy when they announce nominations on January 14.

Vikander also earned a nod from the Globes, and a probable nod from the Academy, for her turn in number five on the list, The Danish Girl, alongside Eddie Redmayne. The others at the top of the heap are two films that left me in tears: Room and Inside Out (there is, in fact, a single scene in each that can still get me to tear up just thinking about them) and the latest entry in the surprisingly large “rescuing Matt Damon” genre, The Martian.

Rounding out the ten are The Second Best Exotic Marigold Hotel, which if you aren’t smiling as the final credits roll probably proves you’re dead inside, Concussion, which should be required viewing for all parents who are thinking about letting their children play tackle football, A Most Violent Year, a combination period-piece and crime drama, and Woman in Gold, a touching story about a woman taking on an entire nation to regain her heritage.

All nine of those are movies that I went in pretty much expecting to love. The final entry on the list was by far the most surprising. I’m not normally a huge fan of horror films, but It Follows is so well done that it easily transcends most of the genre, eschewing gore for real psychological chills.

Seven of the entries were at least in part written by their directors (Ex Machina, Room, Inside Out, Second Best Exotic Marigold Hotel, Concussion, A Most Violent Year, and It Follows.) Room, The Martian, and The Danish Girl are all based on novels, while Concussion is based on a magazine article and Woman in Gold is based on the life story of Maria Altmann. The rest are original stories. None of the movies share a writer or director, but Ridley Scott produced both The Martian and Concussion.

And finally, it’s definitely worth noting that while Star Wars Episode VII: The Force Awakens didn’t make my top ten, it does share actors with a few of the movies that did: Oscar Isaac and Domnhall Gleeson from Ex Machina and Bill Hader from Inside Out.

What were your favorite films of 2015?