It’s a good time to be a Sherlock Holmes fan. There’s less than a month before the Season 4 premiere of Elementary (CBS), and December is nearing so fans of the BBC show Sherlock will get the much anticipated Christmas special that drops Cumberbatch and Freeman into their same roles but jumps back from its modern day setting to Sir Arthur Conan Doyle’s Victorian-era setting. (Oh, and Season 4 of Sherlock will start up in early 2016–not much longer to wait to see how that Season 3 cliffhanger pans out!)

As I wait anxiously for these two shows to return, I’ve been enjoying a number of new Sherlock Holmes books over the last few weeks. If you’re a fan, one or all of these books is sure to be something you’ll enjoy. 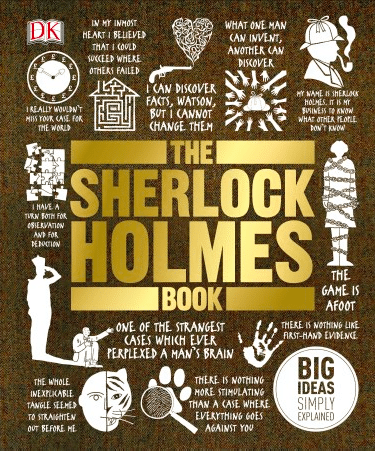 My boys love DK books–they’ve got an easily recognizable style for all their topics, filled with a well-balanced mix of text and imagery. DK uses interesting sidebar and full-page graphics that grab eyeballs and (I believe) encourage a deeper examination by younger readers. While the book will definitely be of interest to YA readers showing an interest in Sherlock Holmes, this book is by no means meant just for kids. Each novel/novella and short story is covered here, complete with a gray sidebar that offers up simple data such as publication date, story type, major characters, and the collection of tales it was first published (such as “The Red-Headed League” short story in The Adventures of Sherlock Holmes).

In addition to complete textual summaries of the stories, I really loved the sidebars that featured how Holmes analyzed the data and came up with the solution. Key quotes are pulled out and given small colorful treatments, and movie posters, book covers, and photos and paintings are provided as supporting imagery for respective storylines. Fun maps and timelines help readers grasp relations between landmarks and key events mentioned in stories (fictional and non-fictional). All in all, it’s an absolute stunning resource for any Sherlock fan, and a perfect companion to offer any new reader of the original Doyle stories. (Tucked into the back of the book are other resources that include films and original tales by other authors as well as a number of essays such as Holmes’ influence in society, the art of deduction, and forensic science in Holmes’ time.)

Sherlock Holmes’s London: Explore the City in the Footsteps of the Great Detective (CICO Books – out on Oct 15, 2015) 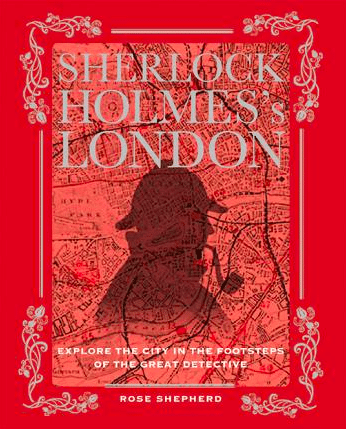 I spent three months working in Europe quite a few years back, and one of my favorite excursions was a weekend visit to London. I made this trip a number of times, and I most certainly had my tourist hat (and shoes) on–I did a few Jack the Ripper tours, had a one-on-one tour of The British Museum with a hired history professor that lasted two days (my hotel’s concierge recommended him and it was EXCELLENT), and exited many a double-decker bus as I got off here and there and just allowed myself to get lost occasionally. Exploring London was a highlight of my time overseas, and how I would have enjoyed it if I’d had a copy of Sherlock Holmes’s London with me.

Note: Yes, I know that the book’s use of the extra s after the apostrophe looks strange on this side of the pond, but as I understand it… it’s correct in the UK.

I must admit that not being a native of London can make the Holmes stories a bit confusing at times with so many real-life locales mentioned. Doyle’s readers would have easily recognized the differences between the West End and Westminster and the distances and travel times between Baker Street and, say, Piccadilly or Charing Cross Road. For the rest of us… some points of reference might be helpful. And that’s exactly where this book delivers.

Definitely read the Introduction! You’ll get some instructions on how the book can be used for actual walking trips by chapter, with reasonable distances for each section a chapter covers. Each chapter opens with a section of London redrawn in bright colors with roads labeled and key areas such as parks or the Thames easily recognizable. Small deer stalker hats point out locations on the maps where Holmes had an adventure or two… a nice touch.

Finally, the book is filled–FILLED–with photographs of the city: hansom cabs, skylines, foggy roads, map reprints, and period elements such as show posters, cartoons, and before/after comparison images. Honestly, I would love to have the chance to take this book and walk the streets of London and see it as Doyle saw it… as Holmes and Watson experienced it. This book has made my enjoyment of the original tales that much deeper, as I now have a better understanding of not only the locales and their relations to the story elements, but also an appreciation of the (fictional, of course) travels and dangers that Holmes and Watson faced in their adventures. A required reading by any Holmes fan. 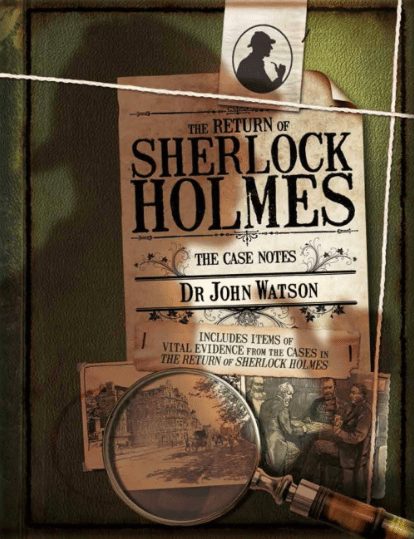 A few years back, I reviewed a book titled The Case Files of Sherlock Holmes. I’m a big fan of books that include ephemera–pull-out material that a reader can examine or plays a part in the story. These books don’t appear all that often, so when a new one is announced I tend to add a reminder to my calendar so I don’t miss it. For you Sherlock fans out there, you’ll definitely want to add a note to your calendar for March 2016 and grab a copy of The Return of Sherlock Holmes: The Case Notes.

As with the first book, this one is PACKED with ephemera. Contained in three Evidence Bags are fifteen items you can hold and examine and enjoy–they include a world map of Holmes’ travels while he was in hiding after his encounter with Moriarty, a newspaper article about the disappearance of Jonas Oldacre (from “The Adventure of the Norwood Builder”); a letter from Lady Eva Brackwell possessed by the evil blackmailer, Charles Augustus Milverton (“The Adventure of Charles Augustus Milverton”); and one of Sherlock’s handwritten notes detailing names and locations of spies in London (“The Adventure of the Second Stain”). Eleven more items I’ll leave for you to discover.

But the evidence bags aren’t the only treasure here. The Case Notes is laid out like a scrapbook, with dozens and dozens of stapled, taped, and glued items–photos, lists, business cards, tickets, cheques, telegraphs, and so much more. (Okay, these items aren’t really glued or stapled in–they’re images made to look that way… but the pages do look musty and the fingerprints and stains and other damage do look authentic and lend a look of authenticity to the claim that the book was found during an excavation, discovered in a “strange little room, evidently a kind of cubbyhole for a particularly accomplished burglar to stash his treasures.”)

Covering nine of Sherlock’s adventures, the book is filled with Watson’s scrawling penmanship and his take on the adventures along with quotes and memorabilia from his adventures with Holmes. It’s as close to a real scrapbook as fans will ever get, and hopefully you’ll find yourself grinning ear-to-ear as I did as you (CAREFULLY) pull out the scraps and maps and other items. (Even better… do as I did, and read an adventure again while accessing the scrapbook’s notes on said adventure and examining the evidence bag items simultaneously. It’s about as close as you’ll come to reading an adventure again for the first time.)

I don’t need to write much about this… just watch. Feel free to giggle like a school girl… there’s nothing wrong with it.

This show just gets BETTER and BETTER. Season 4 is close…

Get Ready for This Week’s Transit of Venus