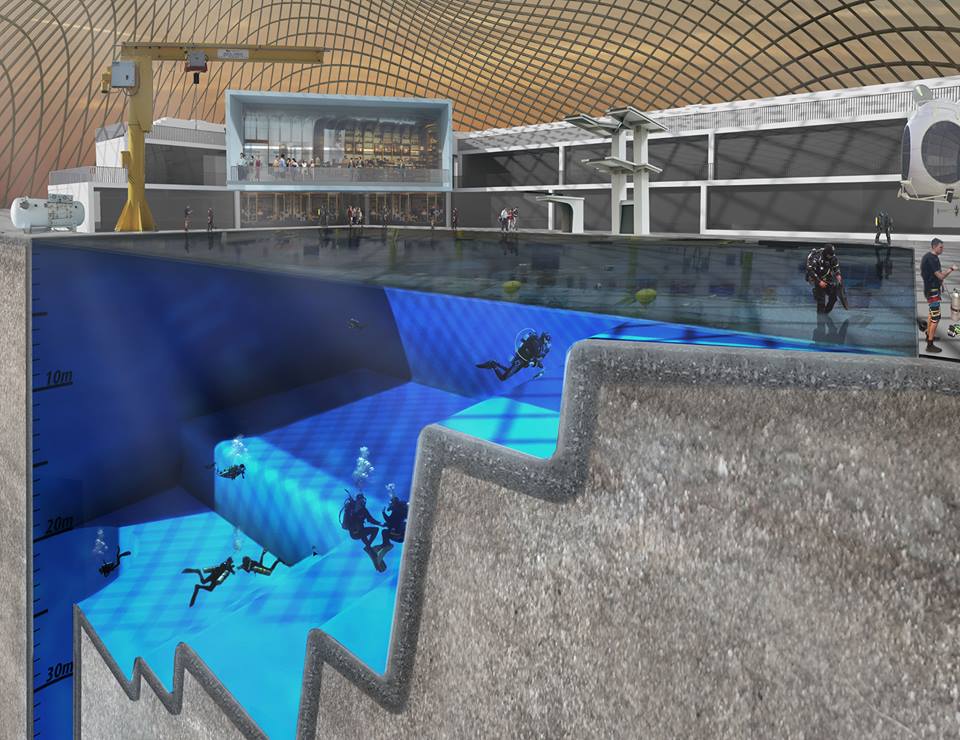 As a child we would go swimming at our local public pool. It’s an indoor pool in my hometown of Walsall, and was the biggest pool I had ever seen. For some reason there were plastic windows part way down underneath the water. I would swim down to see them, and my shadow looming over them would make it appear as though some creature of the deep was passing by. It was tranquil underneath that water, and I loved being there.

I have always had an obsession with water, a love of marine life, a borderline obsession with sharks, and so I read with interest this week that the University of Essex in England, in conjunction with Blue Abyss, is planning the construction of the world’s deepest swimming pool to conduct research into spaceflight and human endurance. At 164 ft, it would be deeper than NASA’s training pool in Houston, by 124 feet, and they say things are bigger in Texas? Currently the deepest pool is in Montegretto Terme, Italy, but it too would be in the shadows of this planned pool, by 23 feet.

The project is being crowdfunded, and personally I’m tempted by the Hollywood star at the bottom of the 50m shaft. You can keep track of the project and its crowdfunding efforts on their Facebook page.

So, beyond my obsession with the water, why the interest in this project?

One of my favorite quotes from Aaron Sorkin’s The West Wing sums up how I feel about most projects of this nature, why I support them, and why I like my tax dollars to go to them when possible.

“Because it’s next. Because we came out of the cave, and we looked over the hill and we saw fire; and we crossed the ocean and we pioneered the west, and we took to the sky. The history of man is hung on a timeline of exploration and this is what’s next.” – Sam Seaborn (played by Rob Lowe) on NASA’s trip to Mars.

Many people think that we should be exploring our oceans more. That there is much of our own world still left to discover, let alone that beyond the stars. For me, this project seems to have it all. The creation of an environment that would help us study our own bodies, and find better ways of moving in deep space and in deep water. A deep water pool may not be what’s next in terms of exploration, but it’s certainly a step towards further exploration, whether we choose to sink to new depths or soar to new heights.

Behind the Press Badge: New Fantasyland