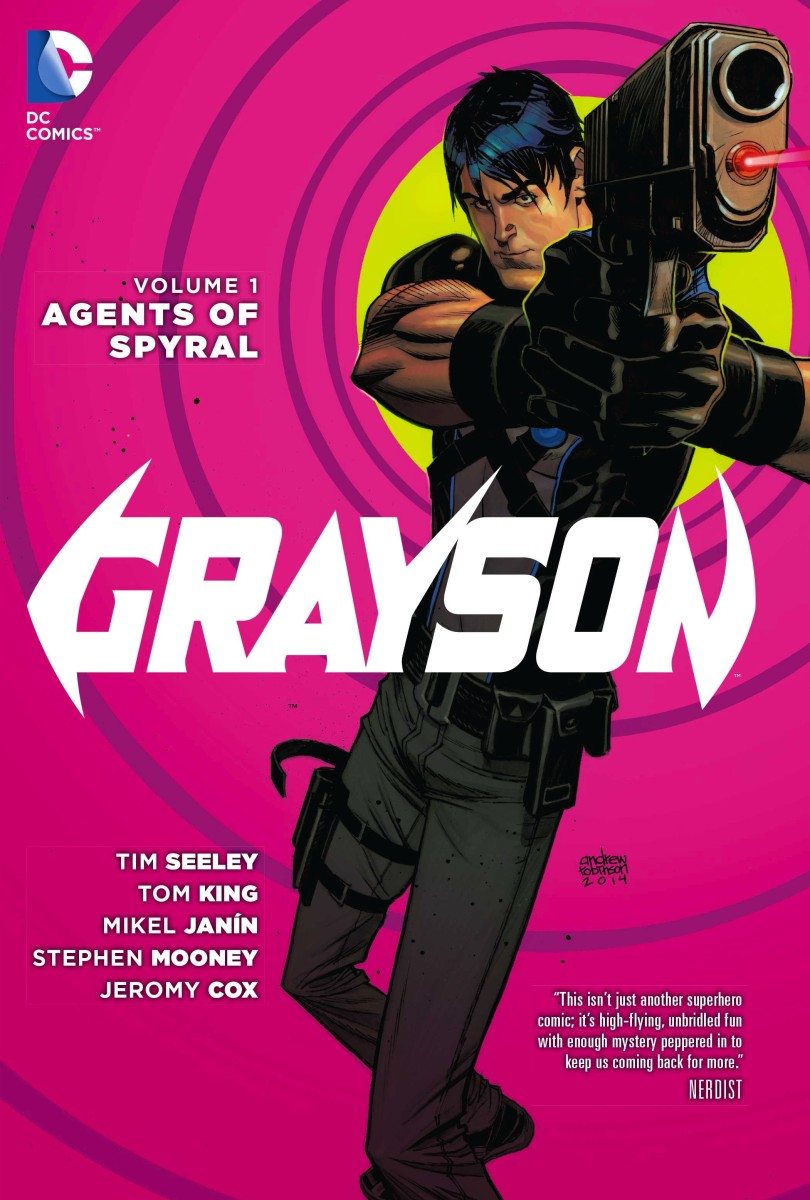 Recently, I was sent a review copy of Grayson: Agents of Spyral. This is the first volume of collected issues from the controversial new series. Here’s the premise: in DC Comic’s Forever Evil miniseries, Nightwing was unmasked by the evil Crime Syndicate and later thought murdered. Dick Grayson, under the direction of his former mentor Batman, has now infiltrated the Spyral agency, sans superhero persona.

I’ll be honest; When this was announced, I don’t remember reading or hearing a single person saying this was a good idea, beyond DC editorial. For my own two cents, I didn’t want to read the series at all. I had already pre-judged Grayson. That very thing always gets on my nerves when I see others do it, yet there I was guilty of it. Fast forward the better part of a year later to my receiving an email asking if I’d be interested in a promotional copy of the book.

Grayson: Agents of Spyral contains the first four issues of the series, plus the Futures End tie-in and a story from Secret Origins issue eight. I was really surprised by the story after having read it. The writers were true to the character, making him boyish and happy-go-lucky. He was still high-flying and quick with a quip. He still kicked major butt. He was the same Dick Grayson who has been a fan-favorite for these past 75 years.

So, with my change of heart, I sat down to interview the writers for the series, Tom King and Tim Seeley. Once you’ve read the interview, be sure to check out a six-page preview from the trade paperback, which hits shelves June 3.

GeekDad: Fans’ initial reactions were mixed (to say the least) on Grayson when it was first announced. How would you gauge reception, now that you have a handful of issues on the shelf?

Tom King: Every fan that comes up to us says, “I thought I’d hate this.” We were both huge Dick Grayson fans. It’s very easy to say “oh, they’re changing for corporate reasons.” Dick Grayson is cool because he evolves. Whether Robin, Nightwing, or an agent of Spyral, he keeps his core optimism.

Tim Seeley: I learned from working on this that, as long as you keep the soul of a character, you can put that character in various situations. After all, Batman went through transformations and has, over time, changed.

TK: The fans have embraced Grayson.

GD: I have to say, I wasn’t sure about reading Dick without his Nightwing persona. I’m sure that’s very much the way people who grew up with him as Robin felt when he first became Nightwing. That said, I really enjoyed the first volume of this series, especially the Futures End tie-in. Do you plan on being around Grayson for those stories?

TK: Dick is one of my favorites.

TS: People believed it would go back to status quo. But we have long-term plans.

GD: Kathy Kane, Spyral’s leader, wasn’t in the first volume of the book; will she be playing a role later in the series? Was she replaced by Mr. Minos?

TK: See issue eight. There’s someone in there that may or may not be her. Spyral is all about misdirection.

GD: Let’s talk tech. The series is chock-full of tech from the various organs to the nanites programmed to consume all bio traces and evidence of Mr. Minos. There’s some new and different stuff there. How do you come up with all of that?

TK: I write to dramatic moments and want to create a moment where my character is pushed to the wall and he says, “One more round.” The tech serves those moments.

TS: It’s funny how much stuff you research that you didn’t think you’d research. You have your tech bookmarks handy to reference. Real life tech keeps getting stranger. It’s okay to make stuff up, too.

GD: Midnighter seems to be on an intercept course with Dick. Will we get to see that? Stormwatch versus Spyral, maybe?

TK: Midnighter is a spin-off character. He has his own new series. We’re cool with the writer of that series.

TS: We’ve already talked to Steve Orlando [writer of the new Midnighter series] about the character.

GD: Spyral seems awfully interested in the Justice League. Can we expect a confrontation?

TK: Can we tease a shadow? Issue nine has a shadow Justice League.

GD: Huntress has always been one of my favorite characters. What can you tell us about this version of Helena Bertinelli, a.k.a. Matron?

TK: She’s still Italian and still has a mafia background. Her background is not that different from the Huntress of lore. She is a dark reflection of Batman with the same background as Batman.

TS: Huntress came out when I was a teenager and enjoying dark characters, like teenagers do. There was no need for another costumed huntress, since there was one already [in the New 52]. We took advantage of that.

GD: Anything else before we go?