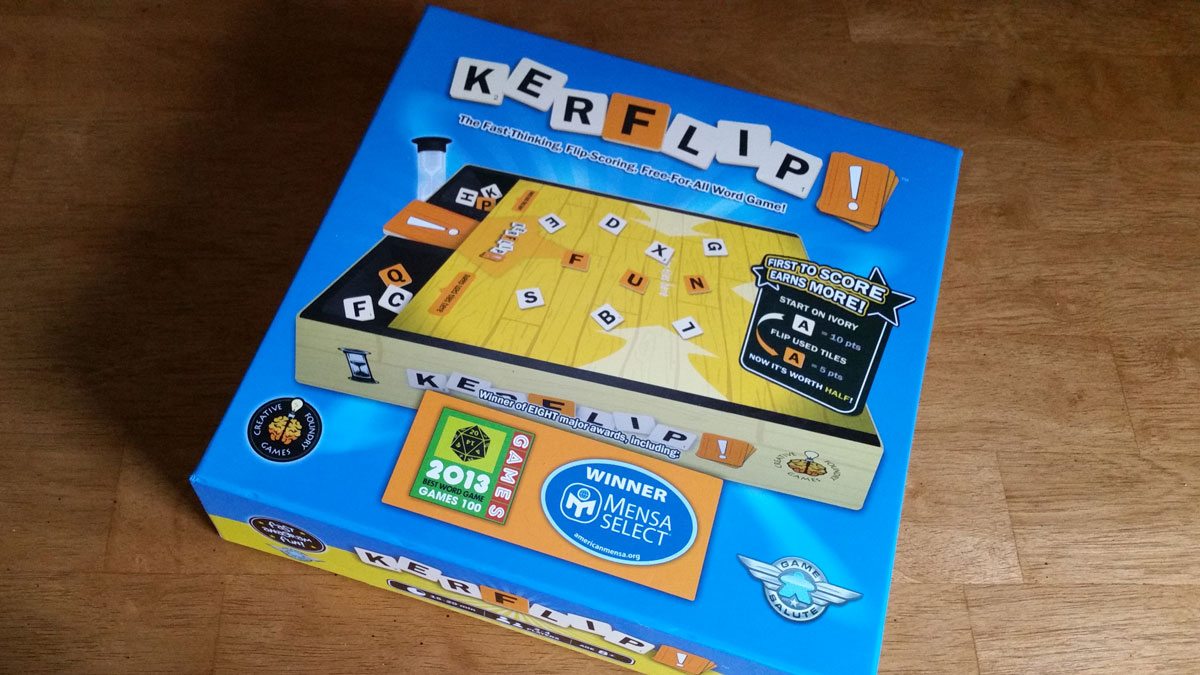 Kerflip! is a quick, fun word building game designed by Damon Tabb. It won Games Magazine Best Word Game in 2013 and a Mensa Select award. The game is available on Amazon for $30, or you may be able to find it at your local game store.

At a glance: In Kerflip!, each player draws a set number of tiles from a bag. Then, everyone drops them on a play area. All of the tiles are turned white-side-up, and then everyone scrambles to try to spell words from the available letters, shouting them out as they find them. Once everyone has a word, players spell their words in the order that they shouted them out. The catch is that letters are worth 10 points the first time they are used, but only 5 points thereafter. So you have to decide: do you try to find a shorter word quickly in hopes that you’ll be first in, or wait and hope to find a longer word that will make up the points?

Disclaimer: I was given a copy of Kerflip! to review.

Setup of the game is very quick. You remove the letter tiles from the storage bag and place them in the draw bag. The game board sits on top of the plastic insert in the box, and the bonus point cards are shuffled and placed in their slot next to the board.

Each player draws tiles from the bag. The number depends on the number of players: five for two players, four for three players, and three for four players. Once everyone has tiles in their hands, everyone drops them at once onto the board. Any that fall orange-side-up are flipped over to the white side, and then the game begins.

The first person to spot a word that can be spelled from the tiles shouts it out. Then someone else will find a word and shout it out, and so forth until everyone has found a word. Two players cannot call out the same word, but tiles can be used repeatedly to spell multiple words. Once you shout out a word you are stuck with it and cannot change even if you later find a better (which usually means longer) word. A sand timer is included, but is only used if the players decide that the last person looking for a word is taking too long.

Once everyone has called out a word, the player who shouted out their word first scores by spelling the word, flipping each tile as they do and receiving ten points per tile. For example, if you found “sand,” you would score 40 points.

The second person to have found a word then spells their word, but with a caveat: any tile that they need that was flipped over to its orange side only scores five points. So continuing from the example above, “land” might only score 20 points: ten for the “l” and five for each of the others, which had been used already for “sand.”

Scoring continues until everyone is done. Then, any tiles that were used–tiles on their orange side–are swept off the board into the plastic insert (more on that in a moment), while unused tiles are picked up and returned to the bag. Everything then starts over: players draw tiles, drop them, shout words, and score, until there aren’t enough tiles left for everyone to draw, at which point the game ends.

Some of the tiles–the ones on rare letters like Q and Z–also have a small number printed on them. Unlike Scrabble, these don’t score more points by themselves, but instead allow the player to draw bonus cards equal to the number on the tile. These cards award players extra points at the end of the game, but as the cards are kept hidden, even from the person drawing them, no one knows how many points. Some cards are worth 20 points, while others may be only five or ten. Two of the cards award zero points.

My kids had a lot of fun playing the game, except against my wife who, it turns out, is very, very good at it. It incentivizes quick thinking–you’ll do well if you can quickly identify and shout out that obvious five letter word before anyone else–but also might reward slower contemplation, since you may be able to score as well if not better by taking your time and finding a longer word, particularly one that uses tiles that give you bonus points. But then again, you might take your time and end up with a three letter word that only uses tiles everyone else already used, giving you a meager 15 points to their 50. And even if you are able to draw a few cards in the process, they may turn out to only give you minor extra points. Or you may be unlucky enough to draw the zero point cards.

The game definitely does well in its quick setup, but also has an ingenious device to speed clean up. As mentioned above, the board sits on top of the plastic insert in the box, and at the end of each round you sweep all of the tiles off the edge into the insert. What isn’t obvious is that the insert is shaped as a funnel, so simply picking up the box and shaking it a bit nicely pushes all of the used tiles into the tile cup, which also sits under the board. I’ve played tons of games that rely on small tiles like this, and have never come across one that really took clean up into account in the design. It actually takes a bit longer to set up Kerflip! than it does to clean it up, and they definitely get kudos for that.

Kerflip! is quick and easy to learn, and, as I said at the outset, my kids really enjoy playing it. In fact, they’ve asked to play it repeatedly since I got the review copy, which I guess is the best recommendation of all.