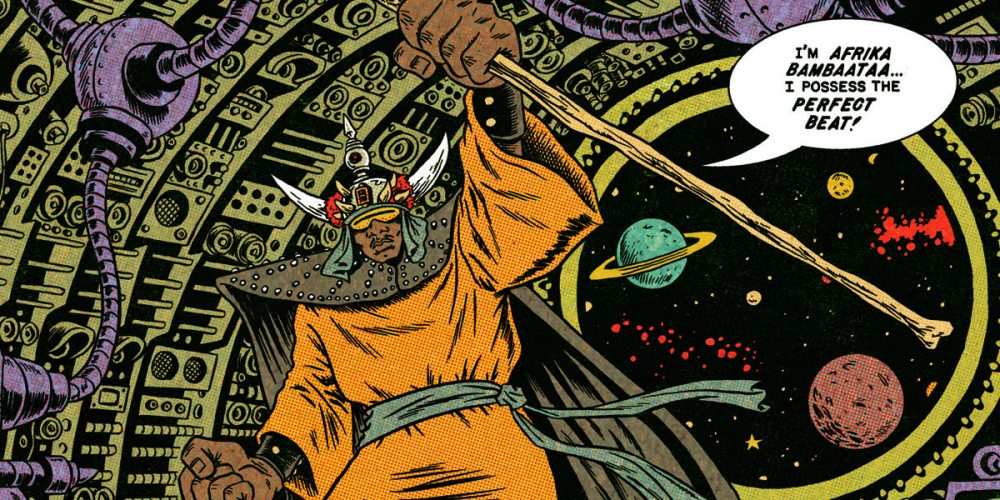 Three of my favorite things are comic books, documentaries and hip hop music, so when I discovered Ed Piskor‘s Hip Hop Family Tree—no doubt with a little help from a couple of my internet rap friends—I was in heaven. These bite-sized biographies of hip hop’s biggest names and slice-of-life reflections on its defining moments are routinely featured at Boing Boing, but to really experience these beautifully stylized vignettes in all their throwback glory you really need to check out the collected editions.

Next month Fantagraphics Books will make doing this even easier with the release of a box set that gathers the first two volumes, covering the events of 1975 through 1983, and includes an additional 24-page comic created especially for this collection. In anticipation of this, Ed was nice enough to talk with me via email about the project itself and the unique kinship between comics and rap that it represents.

GeekDad: As someone else with a long and abiding love for both comics and hip hop, I have to ask: When did you realize you weren’t the only one?

Ed Piskor: I always knew that the intersection of comics fans and hip hop fans was huge. I’ve been going around giving a lecture about the marriage between both cultures, and it goes all the way back to the earliest days of 1970s graffiti with dudes painting Vaughn Bode characters on trains. 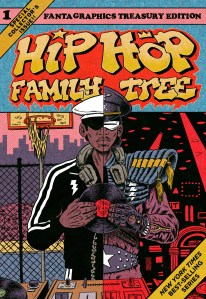 GD: Hip hop, like comic books, was maligned by those searching for an easy root cause to complex social issues. What do you think made these such attractive targets? Are there any lingering misconceptions about either (or both) that continue to feed these attitudes?

EP: I think both cultures are a few of the most democratic artistic mediums we have. For comics all you need is pencils and paper to get your ideas out. Rap music, you just need a guy to bang a beat onto a tabletop and your own genius supplies the rhymes. There are plenty of misconceptions still associated with these forms which I actually kinda like. I like for people to be nervous and suspicious about these forms. That way, the people who become lifers in each culture have to overcome some adversity to earn their stripes.

GD: From DJ Kool Herc to Siegel and Shuster, both art forms seem rooted in the immigrant experience, but you describe them as “distinctly American inventions … both from New York.” Is there something magic about the city that birthed both movements? Do you think it could’ve happened anywhere else in the world?

EP: I think New York just has strength in numbers and inertia when it comes to coming up with cool shit. I also think that lately movements and interesting cultural developments spring up in places that are under the radar. Places where music and art have a chance to grow and develop without criticism, and then when it reaches a critical mass the rest of the country is like “Damn, where did that come from?!”

GD: Let’s talk influences. You worked with the late, great Harvey Pekar and there seem to be hints of R. Crumb in some of your work, but who do you cite as your primary artistic influences?

EP: I am a student of comics, dissecting everything I could get my hands on from the early ’30s until the mid ’90s. I probably learn more from the bad cartoonists than the ones who are considered great. It’s hard for me to pin down my primary influences beyond the usual suspects: Crumb, Pekar, Clowes, Ware, Los Bros., etc.

GD: What about from the world of hip hop? Are there any particular musicians or graffiti writers that inspire you?

EP: The whole culture is something I care about. I think it’s paramount that the person doing a comic like Hip Hop Family Tree should be objective and lack any sort of hero worship. I have rap songs that get stuck in my head, no doubt, but it’s easier for me to name people who I think suck (which I won’t do) than to name my favorites.

GD: Were there any specific episodes in hip hop history—especially in those early days—that proved difficult to research? Are there times when you have to let your imagination take over, or is truth always stranger than fiction? 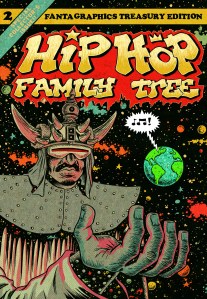 EP: Truth is absolutely stranger than fiction. There’s not one particular moment that is any harder than the others, but the main challenge is making sure I build things in the correct order so that I can lead those situations and plotlines into their proper evolutionary place. HHFT contains within it over 100 biographies of different rappers, DJs, and personalities ,and it’s a strict exercise in world-building.

GD: From Afrika Bambaataa and Soulsonic Force to Grandmaster Flash and the Furious Five to MF DOOM, hip hop has always had elements of larger-than-life personalities and iconic costuming. If you could form your own hip hop equivalent of the Avengers or Justice League, who would you include in this super team?

EP: I’ll answer this a different way; an interesting supergroup to listen to would be to have Rick Rubin produce an NWA record. Or how awesome would it have been if Dr. Dre and Rakim could have come to some kind of agreement when they were supposed to be working together?

GD: You mentioned recently that you could see the Hip Hop Family Tree project continuing up to 1993, which takes us to around the end of hip hop’s Golden Age. If you could pick a single event or artist from that era to close with, who would it be and why?

EP: The last episode of Yo! MTV Raps because that last episode indicated that hip hop had taken over. It used to be that you would have to catch that show and that would be the ONLY hour you’d see hip hop on the channel. By the time they got to the last ep, rap videos could be seen at any given time except for 120 Minutes or Headbangers Ball or whatever.

GD: You’re also known for another project with a very specific cultural focus, Wizzywig. Where did your interest in hacking, phone phreaking and social engineering come from?

EP: Always have been interested in hacking as well. As a cartoonist I’ve discovered that my position in this game is to make stories about subject matters that no other cartoonists are equipped to handle. Japanese comics promise to have different books for every facet of their culture. Why not have a hacking comic or a hip hop book here in America? 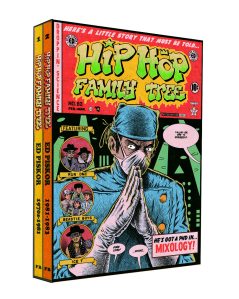 GD: Lastly, Ed, do you have any other upcoming projects that fans should be looking out for?

EP: I’m really immersing myself in HHFT right now, but I think that I have another hi-tech story that I’ve been researching about the “hidden internet” or “deep web” as they call it. I mention it here even though it’s in its earliest germ stages because I would rather someone else grab the bull by the horns so that I can read it rather than actually make it. Comics are a ton of work!

Special thanks go out to Fantagraphics, David Hyde of Superfan Promotions and Ed Piskor for coordinating/conducting this interview amid my own always unpredictable schedule. 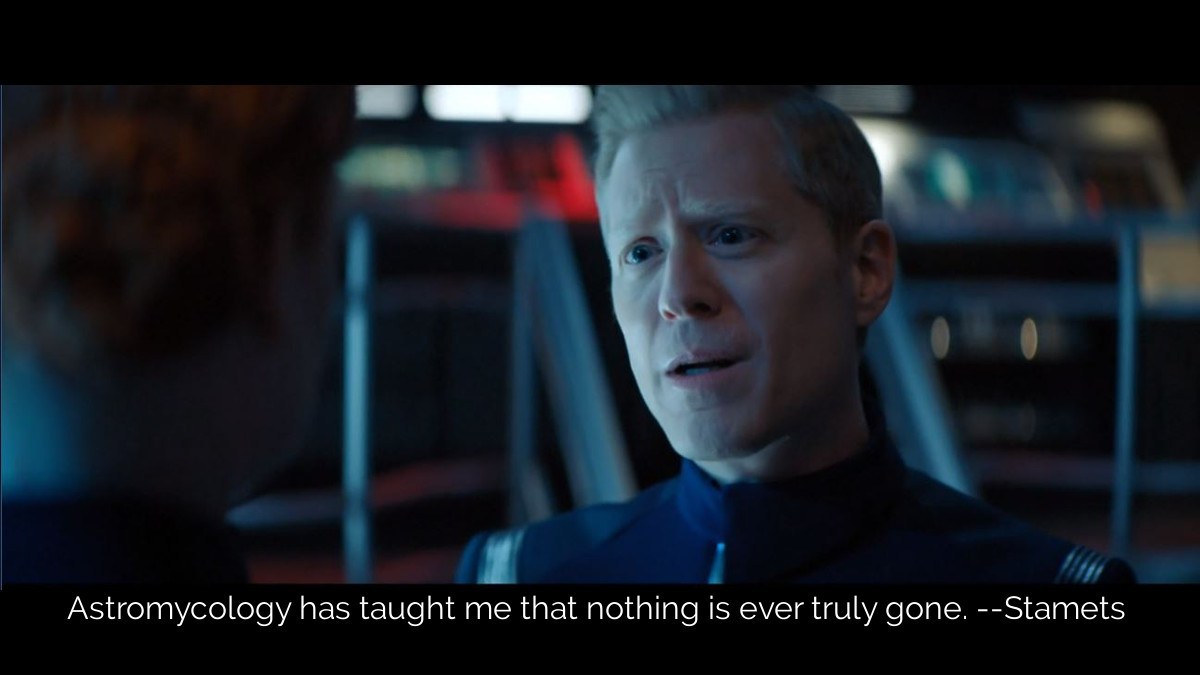