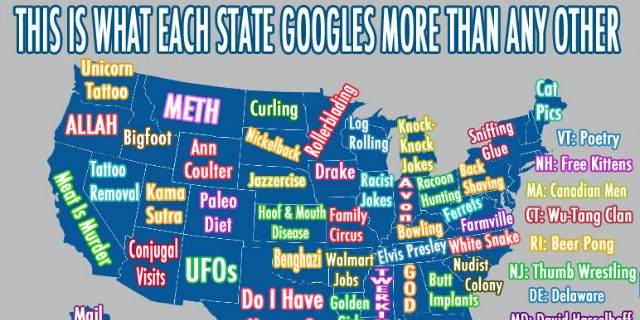 Maybe you’ve seen this viral map of the states most and least prepared for the zombie apocalypse. Or maybe you’ve run across postings and repostings of this map detailing the best states for d-bags based on the percentage of males listing Facebook interests like Nicklelback, Monster Energy and Bluetooth. These maps and more including overlays of kale preference, Crossfit, and livability for hippies are the brain child of one man, Ryan Nickum, blogging for the real estate site Estately.

Data? Zombies? Nickelback d-bags? We like. And so I called up Ryan Nickum to chat about how on earth a legit real estate site that competes with Zillow and Trulia could possibly let him write, most recently, a post detailing states’ most Googled terms that include “Unicorn tattoo” (WA), “Canadian men” (MA), and “Do I have herpes?” (TX).

Ryan Nickum: In high school, Mr. Miller gave me a D and tried to get me kicked out of geography senior year. Now I kind of like being known for the map thing. I tried to declare myself the Nate Silver of mapland on Twitter, but I don’t see it sticking.

GeekDad: So you turned to real estate.

GeekDad: So the real estate site hired you to write about not real estate?

Nickum: You look at Trulia and Zillow and they’ve got a team of writers and big money behind them. But they can’t really take a risk on a post like top cities for d-bags. I write a post and it flops or gets flamed or it’s got a typo, that’s no big deal. But if Zillow does the same thing, it’s like they can take down the whole brand. You can’t do this stuff halfway — you can’t write a toned-down version of a map of state anagrams like Ho Aid (Idaho), and Cows In Sin (Wisconsin). We’ll have a successful article and then one of our competitors will turn around and post a toned-down version of the same thing and then expect the same results. If you try to tone it down, it fails.

Nickum: Maybe once we have the exposure we’ll try to bring it back to real estate a bit more and monetize it. But it’s amazing after the zombies article how often somebody tweets the link with, like, “You know, the reason we should move to Utah, is zombie preparedness!” Obviously it’s kind of silly – but maybe 5 percent of our readers are looking to buy a house somewhere. Those 5 percent are at Estately because we’ve got the zombies, but then they go look around, look at homes.

Nickum: I started out doing quirky lists. You can get shares and get passed around that way, but the Wall Street Journal‘s not gonna write about it without some data. If you’re going to tell people in Montana their state is #6 best for hippies, you gotta have some numbers to back it up.

GeekDad: I’ve gotta ask, how do you get your data?

Nickum: It’s a secret. Okay, maybe it’s not that big of a secret. On Facebook, you go to promote a post or write and ad and then you narrow who you want to expose your post to by geography or interest — based on people’s likes and where they live. So you see there are 24 million Facbook users in Alabama and narrow by zombies and you get the percentage. I’ve had people point out that not everybody’s on Facebook, but not everybody picks up the phone when you call to poll them either. It’s measurable — not highly scientific, but it’s a way to measure things. It’s the same kind of thing with Google Trends.

GeekDad: Is it tempting to manipulate the stats?

Nickum: You make one of these maps and you know California or New York isn’t going to pay any attention unless they’re #1, but, like, if Rhode Island is in the top 10 they’re going to talk about it… still, I have my journalistic integrity.