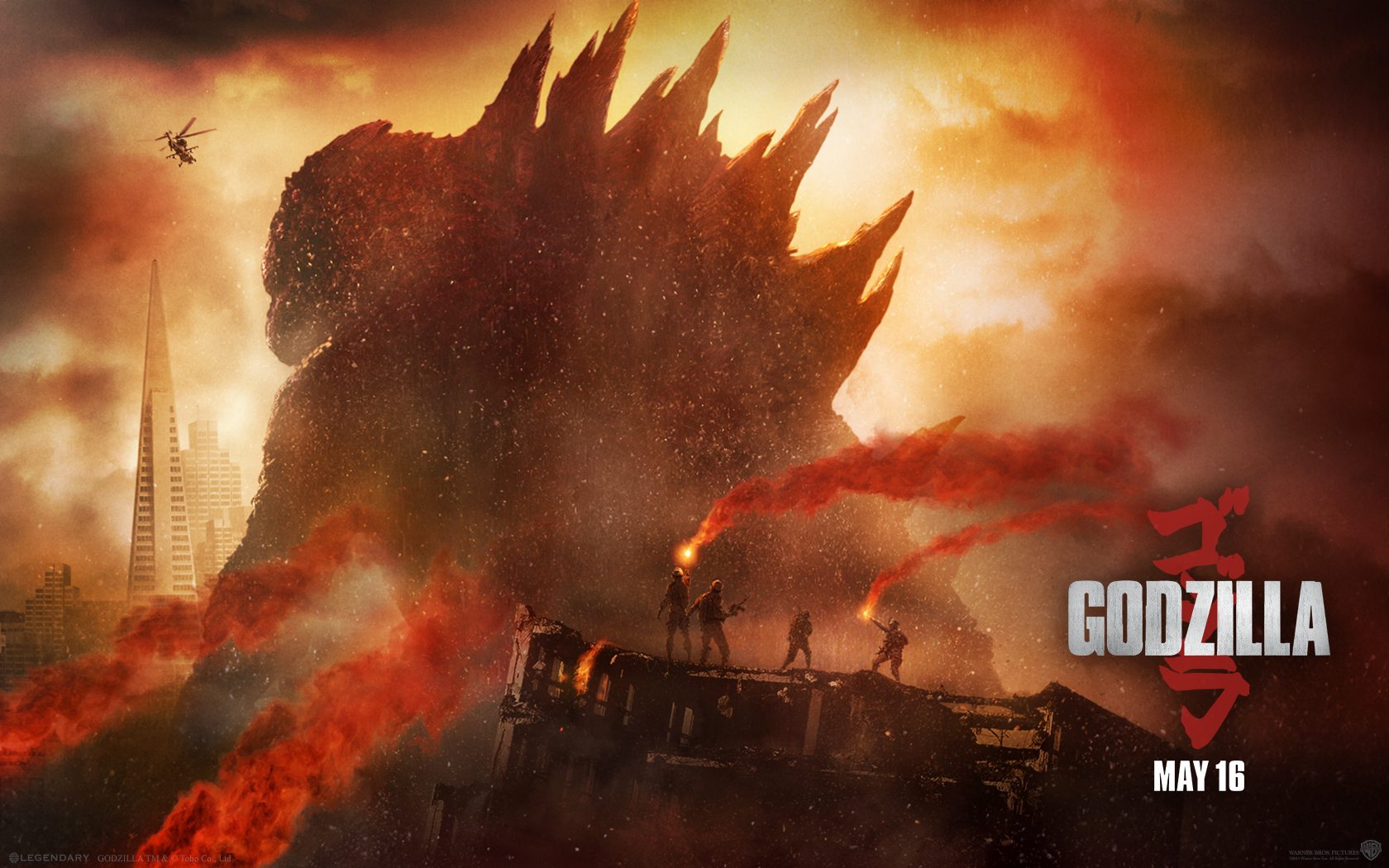 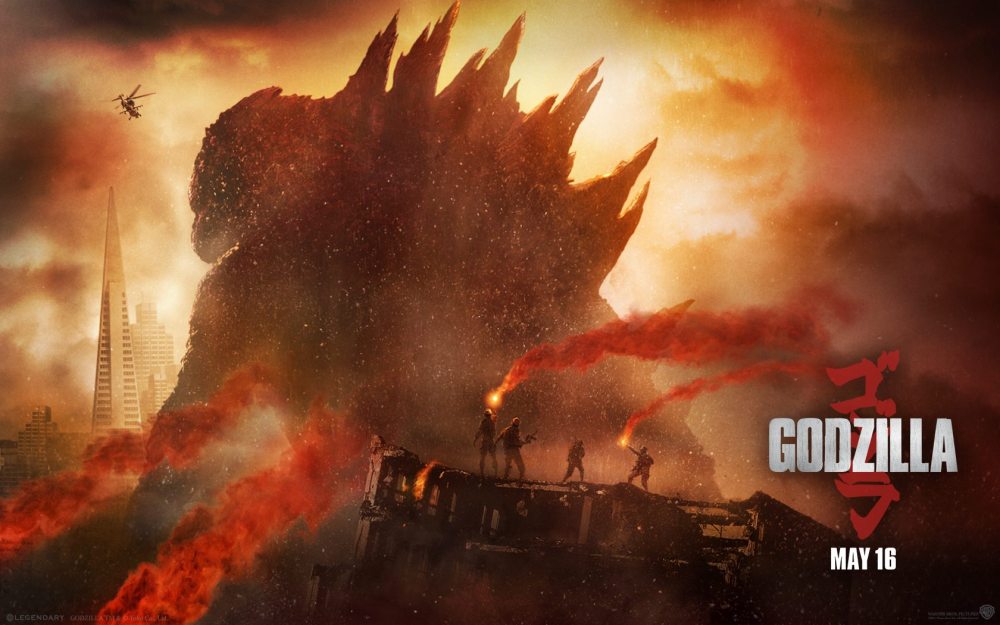 A lot of true fans had heartburn over the 1998 version of Godzilla, with Matthew Broderick and Jean Reno. While I’m a big fan of both the actors, it’s true, that update of the classic Japanese monster movies had one flaw that completely ruined it: Godzilla wasn’t the hero of the film, he was just a big monster threatening a city. It completely missed the point of a true Godzilla film: he’s trying to save us from ourselves.

With the new Godzilla opening this weekend, we have a new take, a new design for the big guy, and hopefully a worthy new addition to the world of kaiju. But what do you need to know, as parents, before packing the kids into the SUV and heading for the multiplex? Read on for a few answers, with only the barest of spoilers (hopefully nothing that’s not in the trailers).

1. Will I like it?: We saw the movie in a pretty packed theater, and there were a number of places in the film where there were unanimous shouts of joy. Godzilla is a very good update of the old films we know and love, and both the action, and especially the monster himself, are great. Most importantly, we root for Godzilla, as it should be.

2. Will my kids like it?: On the whole, yes. Not unlike Jaws, to which director Gareth Edwards was certainly making some nods in many scenes, it’s a bit of a slow burn. The story starts with a tragedy in the past, and then ramps up from there. We don’t see Mr. G until well past the halfway mark. But that’s a great way to build excitement, and it works. Kids younger than 8 might get a bit bored until the threat really presents itself.

3. Should I be concerned about the violence?: Not so much. Obviously, it’s implied there are a lot of injuries and death as the monsters (note the plural) wreak havoc through a number of urban centers (how long have we waited for Vegas to get knocked around a bit?), but we never see them. There is no gore. Just lots of big crashing about, and explosions, and crumbling buildings, and tsunamis.

4. How good are the monsters?: Good. Really good. Monstrously good! (sorry) Basically, there are the M.U.T.O.s (Massive Unknown Terrestrial Objects – except of course they can fly), who are big radiation-eating creatures with a penchant for setting off EMPs. They’re sort of half-bat, half preying mantis, and really well done; they move and fight in a very distinct manner that makes them seem very alien. And then there’s Godzilla. I’m going to say it right here: Best. Godzilla. EVAR. He gigantic – big enough to cause a tsunami when he stands up from the coastal waters. He looks ancient, and angry, and determined to do his job. And he doesn’t look like an overgrown iguana, which is very important.

5. And the story?: The story is serviceable, and that’s just fine. The idea of the monsters being these creatures from another time, when the Earth was more radioactive, is good. And tossing in the ’50s nuclear tests actually being attacks to fight them off previously is fun. With a film like this, there’s always a bit of “isn’t that convenient” when our unlikely protagonist just happens to be the right person in the right place at the right time. But we give that a pass, because this Godzilla is SO AWESOME.

6. How about the actors?: Okay, there’s a little bait-and-switch in the advertising: Bryan Cranston is NOT the lead of this film. It’s much more about Aaron Taylor-Johnson’s character (playing his son). But the Kick-Ass star has stepped up and can really carry an action-hero role. Ken Watanabe, as the Japanese scientist who has been studying the monsters for 15 years, gets many of the best lines, and delivers them with gravity and conviction. David Strathairn is the Navy Admiral who is actually a pretty good listener. Elizabeth Olsen, as Johnson’s wife, is fine, but isn’t given a lot to do other than worry about her husband, and run around San Francisco, escaping a giant monster battle.

7. When is a good time to sneak out for a pee break?: Much of the first half is slow build. You might miss a plot point that explains something they do later, but it probably won’t hurt too much (this is an action movie, after all). But once they get to the Bay Area, you won’t think to get out of your seat anyway.

8. Many reviews are referencing Spielberg’s influence on the direction; how’s that?: Yeah, as I said above, you totally see Edwards channeling Jaws, and some Jurassic Park too. A number of scenes take the POV of kids witnessing the massive destruction, which helps magnify the scale of things. But the most important thing to know is: the dog escapes.

9. Any reason to see it in 3D?: Nah. We saw it in 2D, and that was fine. The effects were still pretty big and awesome. Indeed, I’d actually put the kaiju action here as an improvement on what we saw in Pacific Rim. Most of it is still at night (which means it’s easier to get away with less detail), but it really looks good. However, if you have the money to spend, I imagine IMAX would be amazing.

10. Any nitpicks?: Nothing that degraded the movie for me. As a life-long SF Bay Area resident, I could see many of the cinematic short-cuts they took with geographic accuracy. The worst being that a bus carrying people fleeing The City and heading for Oakland take the wrong bridge, but only a local would notice that kind of thing.

Just go see it. This is a great popcorn movie. Godzilla is a superhero; kind of like The Hulk with nuclear fire-breath (oh, just wait…). It just really feels good to see him up on the screen again, presented the right way. The big G has a soul. He’s doing the right thing. As Ken Watanabe’s character says at one point, “let them fight.” That’s all we really want.

24 Video Games You Can Say Yes to After School

4 thoughts on “10 Things Parents Should Know About Godzilla”