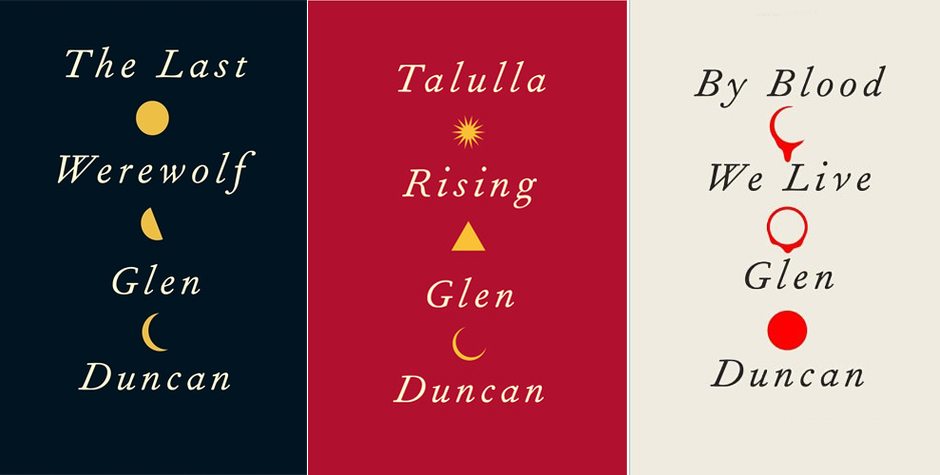 They’re creepy and they’re kooky, mysterious and spooky: monsters have been a part of pop culture since the earliest known fiction, and remakes and reboots weren’t too far behind. Vampires, werewolves, zombies, dragons… all of these and more have been examined and reexamined, made into movies and TV shows and board games (or even shows about board games inspired by movies), and when a new medium comes along we’ll find a way to tell new versions of the old stories there, too.

Sometimes we crave tales of human ingenuity, overcoming long odds to survive against creatures with superior strength and powers. Or sometimes our tastes are a little darker, with puny humans succumbing to things they barely understand. Lately there’s also been a trend of humanizing the monsters—getting into their heads and examining what makes them tick.

Here are several books (or book series) that I’ve read in the past year that teach old monsters new tricks. 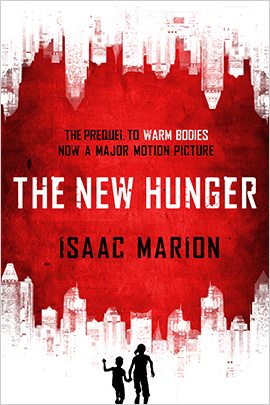 The New Hunger by Isaac Marion

Marion’s breakthrough novel, Warm Bodies, put a new spin on our favorite mindless shamblers—by giving them brains. In their heads, I mean, not as food. It was made into a movie (haven’t seen it yet—it’s on my list), and remains one of my favorite zombie stories. The concept may sound a little silly—zombie meets girl, decides not to eat her, they become friends—but Marion’s writing makes it work.

The New Hunger, published a year ago, is a prequel to Warm Bodies: the zombie plague has already spread throughout North America, though the extent isn’t entirely clear. We follow a couple of different characters as they pick their way through this brave new world—teenage Nora and her little brother Addis, a young Julie Grigio with her armed-to-the-teeth parents, and a newly-turned zombie who is still figuring out what he is and the new urges that drive him. You don’t have to have read Warm Bodies to understand this one, though you’ll recognize the characters if you have.

I’d written about The Last Werewolf a couple years ago, but I only got around to the next two books recently: Talulla Rising and By Blood We Live (just out this month). It’s hard to tell you about the third book without giving spoilers about the first two, but before you skip down to the next book, I’ll tell you this much: the books are definitely not for kids—there’s a lot of violence, sex, and language, but they also have a lot of literary references and language that, frankly, kids just aren’t going to get until they’re older. It’s a fascinating take on werewolves and vampires, and I found myself really enjoying the trilogy despite the fact that it’s not really my normal fare.

Ok, spoilers ahead, so feel free to skip down.

One of the things that all three books address is the internal dialogue that goes on in a monster’s head. The first two books are more heavily about werewolves, but the last gets into what it’s like to be a vampire, too. Book 1 is about Jake Marlowe, a 200-year-old werewolf who’s the last of his kind. There’s a lot of existential angst about it, but he’s also kind of ready to go. After all, 200 years of turning into a giant monster and eating people once a month can do a number on you. The plot involves the mystery of why bitten people haven’t been turning into werewolves (thus the dying out), the natural enmity between werewolves and vampires, and WOCOP (World Organisation for the Control of Occult Phenomena).

However, once Jake is finally ready to die, he meets Talulla—a werewolf. It turns out he wasn’t the last after all, but then he’s finally killed off, with Talulla left to carry the torch. And it just so happens that she’s pregnant. Book 2 focuses on this aspect: now that we’ve dealt with the idea of being a monster, what’s it like when you’re a parent? When your kids also need to kill and eat once a month? Duncan works through the ramifications, both emotional and logistical. The bulk of the story is about Talulla tracking down her son, who is kidnapped by vampires at his birth—turns out there’s some prophecy about Remshi, an ancient vampire, and a bunch of his true believers need a live werewolf for their party trick.

Finally, Book 3 jumps between several voices, including Remshi (that ancient vampire), who believes that Talulla is the reincarnation of his former beloved. While they’re working that out, though, the rest of the world has finally caught on to the existence of monsters, and the Church in particular has declared war on them.

All three books are superbly written (though not for the faint of heart), and if you’re looking for a good monster tale it’s not a bad place to start. My only complaint, really, was that when different characters trade off narrating the story, there aren’t really that many distinct voices. Jacob narrates the first, Talulla narrates the second, and four different characters trade off in the third—but it was pretty hard to tell them apart. Surely not all of these people from different backgrounds all sound like Glen Duncan. However, that’s a minor issue and shouldn’t keep you from giving the books a read. 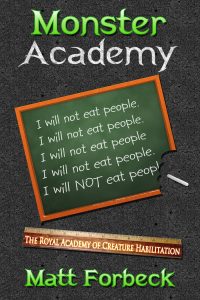 GeekDad’s own Matt Forbeck wrote Monster Academy as part of his 12 for ’12 Kickstarter campaign, in which he aimed to write 12 novels in 12 months. It took a little longer, but he’s getting pretty close—Monster Academy is the final trilogy and I Will Not Eat People is the first volume.

You can read the first chapter here, but here’s the gist: Monster Academy is the nickname for the Royal Academy for Creature Habilitation, a dungeon-like “school” that exists in an uncomfortable tension with the citizens of Halcyon. After all, most of them think that all monsters are evil and should be destroyed—but since the king’s granddaughter is a vampire, they have to put up with it.

The story centers around Ruddy, a young dragon who generally takes on the form of a boy. At the beginning of the book, he’s captured from Castle Chaos and taken to Monster Academy, where he meets other monsters for the first time: werewolves, vampires, goblins, and more. When a famous monster hunter turns up dead near the school (burnt, in fact), Ruddy is blamed for the murder, and has to clear his name.

Monster Academy is a fun read, and it’s one that you could share with your kids. The characters are colorful, and I think any kid would love the idea of being able to sprout wings and breath fire. On top of that, there’s a message of acceptance and the idea that people (or monsters) should be allowed to prove themselves, rather than being condemned simply for being monstrous on the outside. 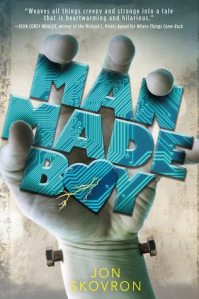 Man Made Boy by Jon Skovron

In the world of Man Made Boy, all the monsters from fiction are actually real—they’re just hiding out, sometimes in plain sight. Boy, for instance, is part of a troupe performs near Times Square, though the audience is led to believe that it’s all done with makeup and special effects. In case you couldn’t tell, Boy is the teenage son of the Monster and the Bride. (I’m happy to report that Skovron knows “Frankenstein” is the name of the scientist, not the monster.)

He’s seventeen, and his stitched-together mug makes him incredibly ugly, so he hasn’t spent much time out in public. But there’s conflict at home (in particular, the way his dad wants to steer his life) and Boy runs away, eventually meeting up with other misfits and strange characters, including the granddaughter(s) of Jekyll and Hyde.

I wasn’t sure what to make of the book at first—some of the time it felt like Skovron was just throwing in as many random creatures and monsters as he could, even when it was a real stretch. However, I really liked the character of Boy—his experience of the outside world has been entirely online up until the time he leaves, and he has been able to hide behind his online persona. Once he’s out in the open, though, he realizes that people react to the way he looks, not who he is inside.

The plot is somewhat over-the-top and tests your suspension of disbelief, but it’s a fun read if you don’t overanalyze it. And Skovron does capture the relationship between the teenage Boy and his parents pretty well—just because they’re monsters doesn’t mean they don’t have a lot of the same problems as the rest of us. Man Made Boy is targeted at young adults; the language and teenage hormones make it unsuitable for younger readers. 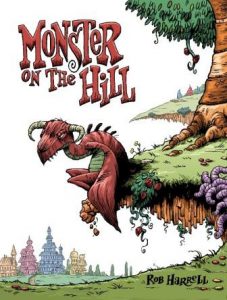 Monster on the Hill by Rob Harrell

Speaking of monsters who aren’t as bad as they look on the outside, Monster on the Hill is a funny graphic novel by Rob Harrell (who also creates the Adam@Home comic strip). The story takes place in 1860s England, where every town has its own monster—sure, it comes through town and destroys things, but it’s kind of like a mascot, too.

Except Rayburn. He’s kind of a downer, actually. He just mopes around on his hill, sighing loudly, and can’t be bothered to work up a good roar. The disgraced Dr. Wilkie (and tagalong newsboy Timothy) set out to fix their monster. Maybe a good scare would bring back some tourist dollars. Along the way, though, they discover there’s an even bigger threat to Rayburn’s little town—he’d better get his groove back, fast.

The book is delightfully silly, and mostly kid-friendly. (The Brits say things like “bloody hell” on occasion.) The people will look familiar to readers of Adam@Home, and it’s fun to see Harrell tackling a different environment and monsters. 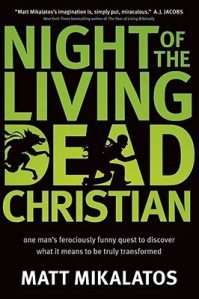 Night of the Living Dead Christian by Matt Mikalatos

Night of the Living Dead Christian is an odd one—it’s a cross between monster fiction and something you’d find in the “Christian living” section, but it’s pretty entertaining, too. Mikalatos puts himself as a character in this story, in which various monsters are tied to specific behaviors: vampires are those who seek their own satisfaction at others’ expense; werewolves aren’t in control of their animal desires. And zombies? Those would be the shambling hordes of Christians, mindlessly following whatever they’re told to believe and looking for more victims to add to the horde.

The story centers around Luther, a werewolf who comes to Matt seeking a cure, because the wolf is endangering his marriage. Unfortunately, there’s also a werewolf hunter on his trail who has his own ideas about how to cure lycanthropy—permanently.

Unlike most books about Christianity, Night of the Living Dead Christian incorporates pop culture in a way that doesn’t seem forced. The monsters here may be allegorical, standing in for something else, but they’re also, well, monsters. I’d say the book is written mostly for Christians, partly as a critique and partly as an exploration of what it actually means to be transformed, although non-Christian fans of monster mash-ups may enjoy Mikalatos’ take, too.

Disclosure: GeekDad received review copies or digital versions of all the books in this post except Monster Academy, which was received as a Kickstarter reward. 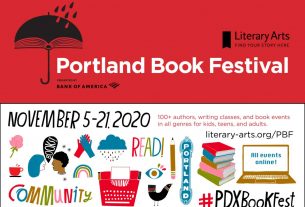 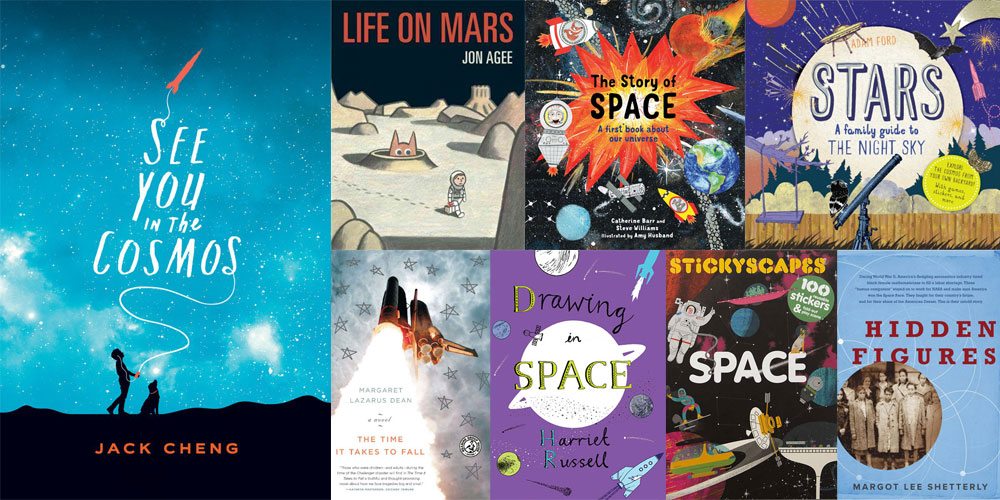