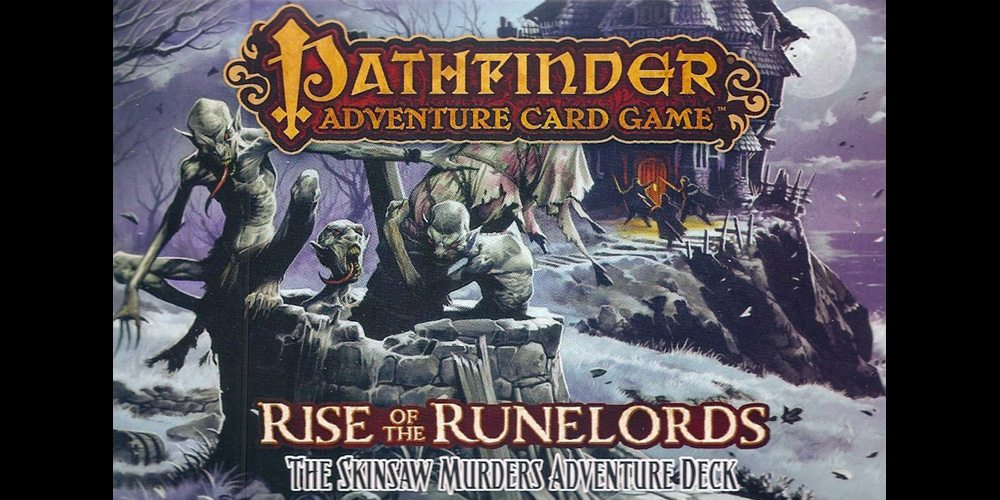 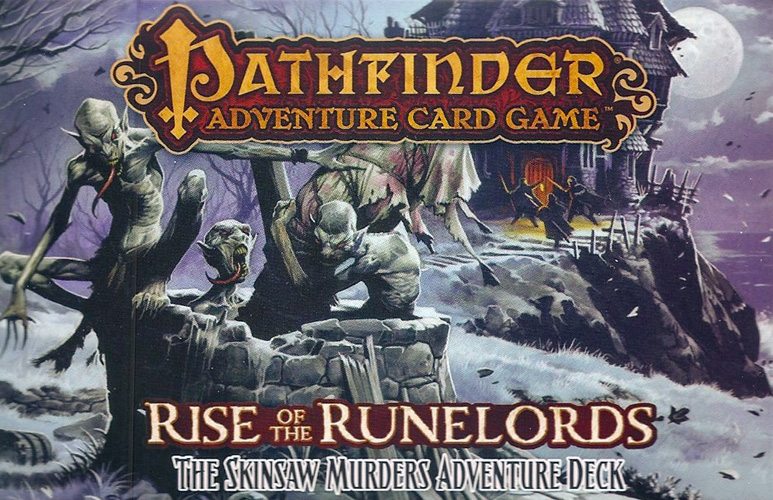 The second adventure deck for the Pathfinder Adventure Card Game was the Skinsaw Murders, and my adventuring party just completed the last scenario. It was released in October, and as it turns out some of the scenarios would have been really great for Halloween, but organizing schedules for six players can be tricky, particularly around the holidays. It looks like the third adventure deck, The Hook Mountain Massacre, is available now, so I’m looking forward to that. But first, a closer look at the Skinsaw Murders.

A quick note: I prefer not to know too many details about a scenario and the bad guys before going into an adventure—be warned that there are spoilers here!

The overarching storyline is that Sandpoint is now plagued by the undead. Signs point to Foxglove Manor, and there’s a murderer backed by the Skinsaw Cult. Eventually you’ll track down the “angel in the tower,” a creepy lamia named Xanesha.

The five scenarios included include various mixes of villains and henchmen. For instance, in the first scenario there are three named henchmen before you get to the Zombie Minions, so you get a lot more variety across the different locations. (And Dr. Habe was an interesting henchman, too—instead of fighting you he just hides behind the other monsters in the location until you corner him.) I also liked the scenarios in which things work a little differently. In the first adventure path, the “Local Heroes” scenario had no villains or henchmen—you just had to close out all the locations before time ran out. In this one, “Foul Misgivings” has an interesting twist: the Haunt henchmen don’t actually attack you or do damage to you—they just attach themselves to you, making every die roll harder. In addition, each time a new Haunt appears, you roll a die and see if the villain Iesha Foxglove appears.

Iesha Foxglove is pretty creepy, too—you don’t actually fight her; you have to use wisdom, diplomacy, or divine, and you also have to have a Magic trait involved. Beat her, and you’ll get to search for the Skinsaw Man (the main villain for the scenario). Otherwise she just damages you and vanishes until the next haunt appears.

The other villains have some nasty effects, too—some require two combat rounds, or additional battles with monsters or minions before you get to fight them. Both Justice Ironbriar and the Skinsaw Man get more difficult if you face them alone. Xanesha, the final villain, has a combat or wisdom check first, then another combat check—and if you fail a combat check then you can’t play any spells or weapons for the rest of the turn.

The henchmen are really Halloween-friendly, as you can see—ghosts, scarecrows, and zombies, oh, my! The one thing that I noticed is that many of the henchmen and villain in this scenario are immune to the Mental and Poison traits, but as far as I know we haven’t come across too many attacks that use those traits—the Acid Arrow spell is the only one I can think of. So I’m wondering if these henchmen will show up again later. The Skinsaw Cultist isn’t too difficult, but if you don’t defeat him then he uses up time by taking cards from the Blessings deck.

Of the new monsters, probably the worst one was the Faceless Stalker—first it requires a Wisdom 7 check or it gets harder to fight. If you lose, it doesn’t do regular damage but instead buries the top card of your deck. The Diseased Rats are another monster that don’t do regular damage—if you don’t defeat them then you have to pass a Constitution or Fortitude check or you’ll discard the top card of your deck.

The rewards for completing scenarios are pretty similar to the first deck: you’ll earn a card feat, a skill feat, and a power feat, plus you’ll all get a random spell and a random armor. While those may not help everyone in your party, it does mean that over the course of the adventures everyone gets a chance at cards that will boost them. This time, there are four Loot cards instead of one, although we were somewhat disappointed to find that one of them is another Sihedron Medallion. There are two of them? Is one of them a cheap knock-off?

As for the rest of the Loot, there’s the Impaler of Thorns, a weapon that functions a little like the Glaive in that you can re-roll if you miss, but it has a +2 for combat. The Snakeskin Tunic is a light armor that protects against combat or poison damage, but it has the added bonus of adding 1 to your Dexterity check. (We gave this one to Valeros, who has a deathly fear of falling into Pit Traps.) Finally, there’s the Medusa Mask, a magic item that basically lets you freeze a monster until the end of your turn.

The 110-card set also includes new cards of all the other types, of course: locations, allies, weapons, spells, and so forth. We didn’t come across a lot of really great new allies that we wanted, but there were some better spells and weapons to boost attacks. The new Deathbane Shield has the nice ability to make any attack Magic, and there are a few new items but we haven’t managed to collect them yet.

Overall, we had a lot of fun playing through this one. We had a party of six until one of our players had some other commitments so we dropped Seoni and continued with five. We’ve managed to avoid defeat (and death) so far, but we have had a few very close calls. In our last scenario, we defeated Xanesha with only one more turn left in the Blessings deck. Often, it’s not the fight itself but getting to the fight that’s the real challenge: once we actually close locations and pin down the villain, we can usually throw enough bonuses and blessings to make the actual combat fairly easy.

If you haven’t had a chance to play the Pathfinder Adventure Card Game, I highly recommend giving it a shot. (My full review is here.) I’d love to see more scenarios and villain/henchmen combinations that mix things up a bit from the usual combat, and I’m excited to see what happens in the Hook Mountain Massacres. The Skinsaw Murders is available for purchase on Amazon or directly from Paizo.

Disclosure: Paizo provided a copy of the Skinsaw Murders for review. 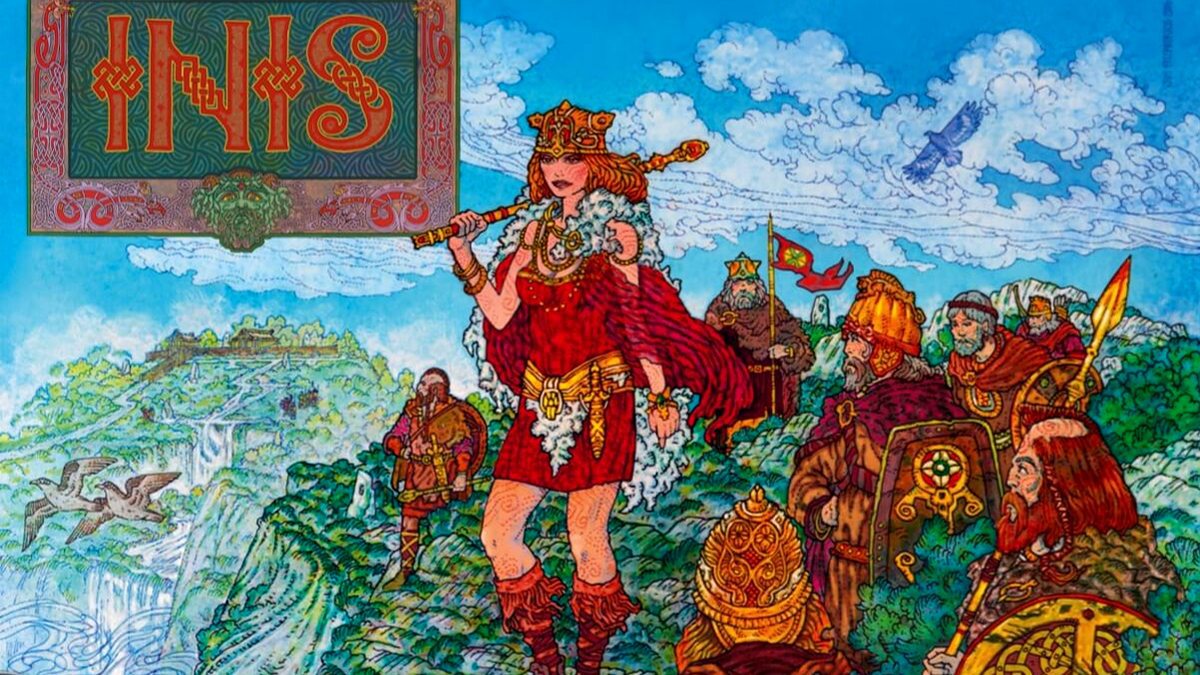