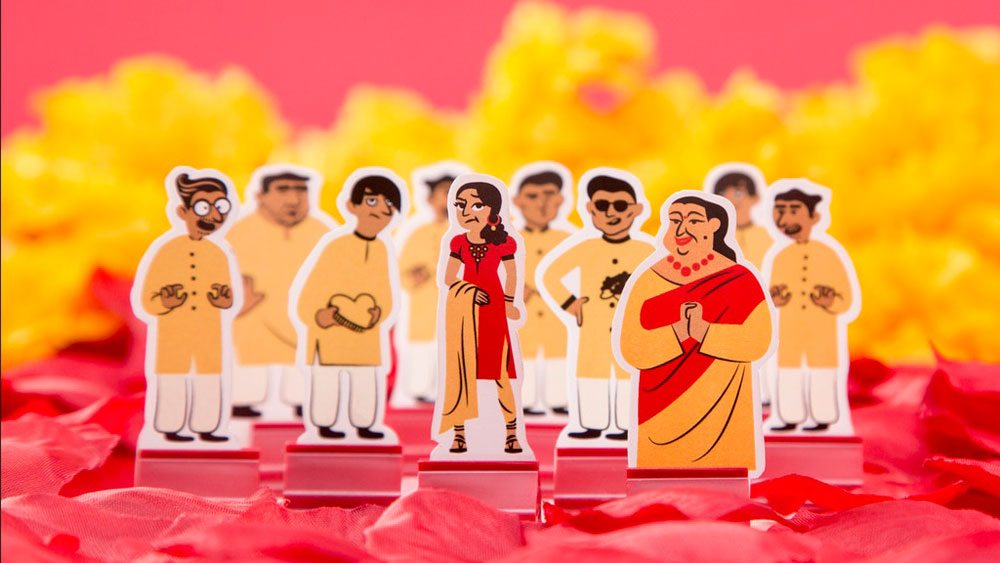 September is always a busy month for tabletop Kickstarter campaigns. Heck, every month is a busy month—but a lot of people like to launch campaigns around or shortly after Gen Con, so expect to see a lot of reviews of projects here on GeekDad in the coming month. In the meantime, here’s a quick look at some current tabletop projects, beginning with a couple that are ending very soon! 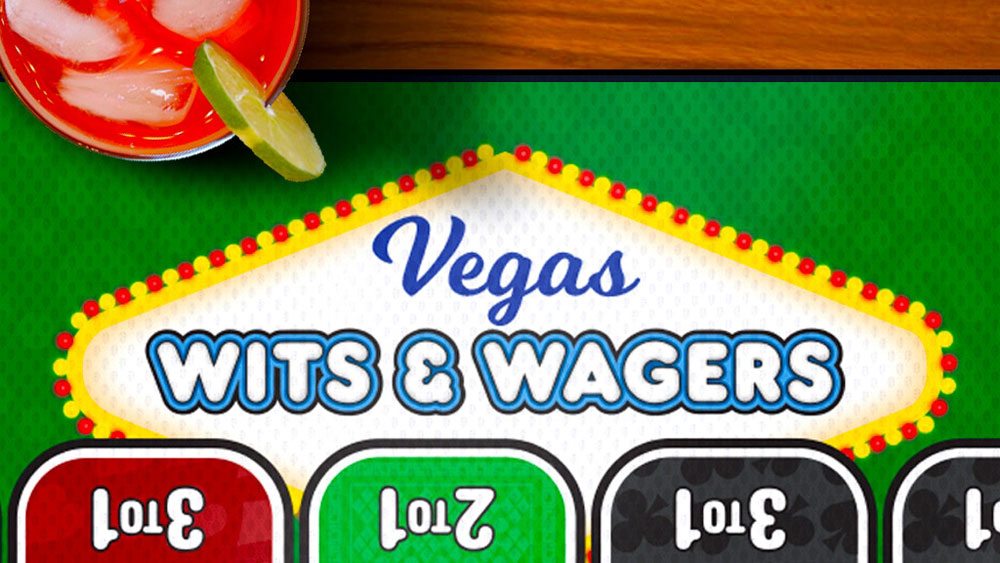 Wits & Wagers is a fantastic trivia game for people who don’t usually like trivia games, because you don’t always have to know the answer to win. You just have to know which player is most likely to know the answer, and then you can bet on their answer instead of your own random guess. Of course, if you know the answer, you could also bluff by intentionally putting an incorrect answer down, hoping to mislead those who bet on you. You can score by getting the closest answer without going over, or betting on the best answer. (You can see our review of the original game here.)

There have since been several versions of Wits & Wagers: a Deluxe Edition with fancier components, a Family Edition with questions geared toward younger kids, and a Party Edition that collects together the more “fun” questions. (There are some rules tweaks involved, too.) The current Kickstarter works like an upgrade to the Party edition—if you don’t own it already, you can also pick a copy of it through the campaign.

The Vegas Edition puts a new spin on the betting, which is what really sets Wits & Wagers apart from most trivia games. You get a huge neoprene playmat (like a mouse pad material) that’ll make your table look like it belongs in a casino, some neoprene covers for the betting zones that aren’t available (varies with player count), extra betting tokens and a pen for a 7th player, and some Vegas-themed dry erase boards (including Elvis). You also get some $500 and $1000 betting chips, because it wouldn’t be Vegas without some higher stakes, right?

One thing that changes about the bets is the payoff amounts, which are more like the Deluxe Edition: the more extreme answers pay out bigger than the ones in the middle. But there are also “long shot” bets, represented by the character portraits on the right side of the board. You can bet on a player before answers are revealed—and if you’re right, it pays off at a whopping 10 t0 1. Of course, this is where the bluffing comes in! You can always take a safer bet, too—a 1 to 1 bet on either red or black, depending on whether you think the answer is in the higher range or the lower range. The mat is double-sided, with the Deluxe Edition on the back, so you can play that version if you like. Finally, the stretch goals add more themed questions to the game—several have been hit already, with more in the works.

You can get the Vegas expansion only for a $25 pledge, or get the Party Edition and Vegas expansion together for $40, which is a pretty great deal. This one ends tomorrow, though, so don’t wait too long to place your bets! (Note: this one’s a pretty sure bet.)

North Star Games provided a sample of this game.

I love the way games can be used to inform and educate in addition to entertaining. Arranged! is a game that sheds some light on a topic that many of us may not be so familiar with: arranged marriages. The game itself looks to be pretty light-hearted: the matchmaker tries very hard to match up the girls, who are trying to give excuses not to get married. But then Mr. Right shows up, and then the girls are all trying to get matched to him, while the rest end up stuck with those guys they were trying to avoid in the first half of the game.

Designer Nashra Balagamwala was facing the prospect of an eventual arranged marriage and had heard both good and bad stories about arranged marriages, and she wanted to spark more conversations about the topic. There’s a great interview with Balagmwala on the BBC that gets a little more into her motivations and inspirations for the game.

Arranged! is ending tomorrow as well, so check it out soon! I hear it has many great virtues and would make a great match. 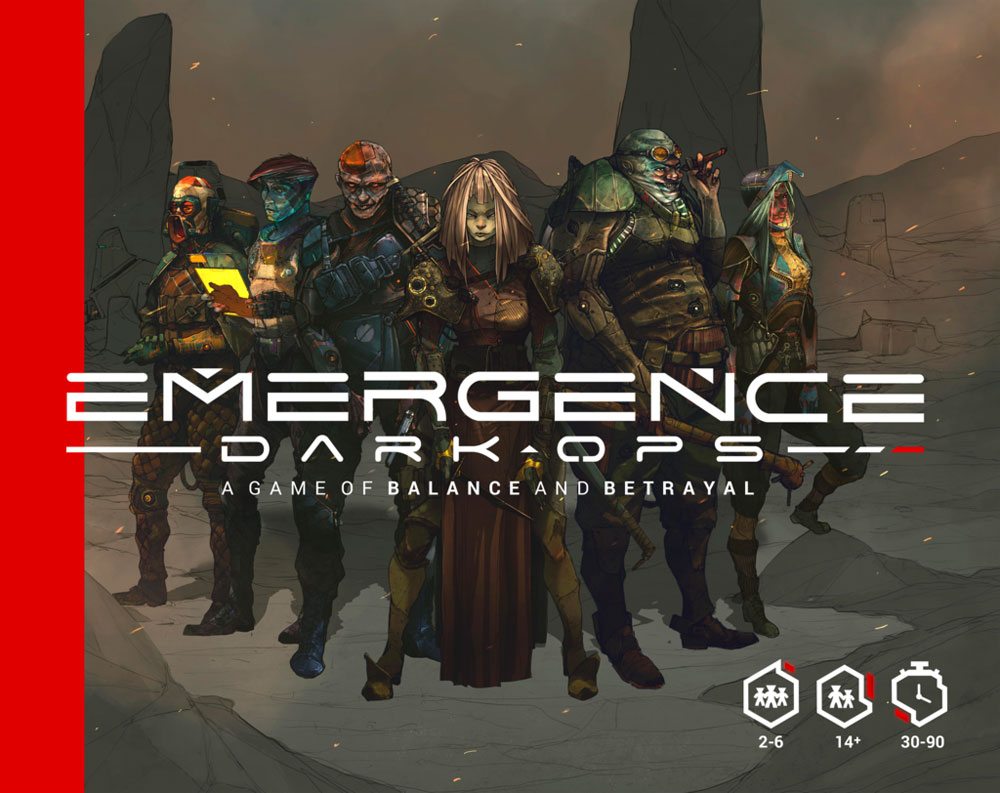 Early last year I reviewed a game called Emergence, which pit AI vs. humans in a game with hidden roles. The project funded and was delivered to backers in late 2016. The team is back on Kickstarter now with a stand-alone sequel—it takes place in the same world and shares some similarities in gameplay, but it is really its own game. There are some components that are the same between the two games, so that you can take pieces from Dark Ops and expand your original Emergence up to 12 players, but the original game is not required to play this one.

Here, instead of two teams, it’s a free-for-all as players head out and gathers data for their own bases. Success will require help from other players—and each player has a secret target, somebody they want to fail. The game uses simultaneous selection, so you’ll want to choose actions that benefit you, but not take the same action as other players. Dark Ops also includes miniatures, unlike Emergence.

I met the folks behind Emergence at PAX West last weekend and got a quick overview, though I didn’t have time to play a full demo. It looks like a cool shift from the original game. 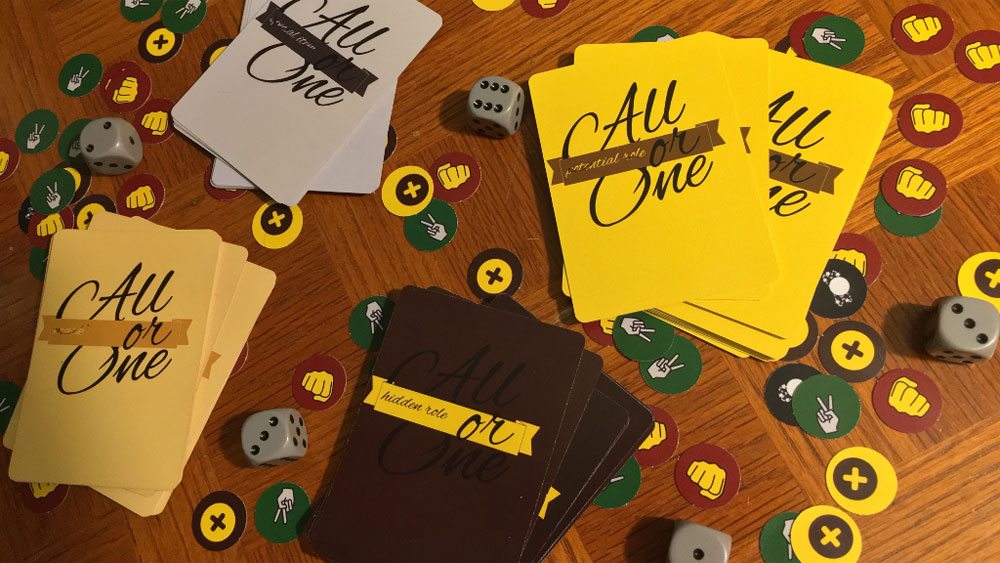 I got a chance to play a demo of All or One at PAX West, and it’s a hidden role game where everyone has a secret agenda and you have to choose between trust and aggression. The game is described as “an escape room where the puzzle is the people,” though I wouldn’t necessarily categorize it like an escape room, at least the sort of escape rooms I’ve played. It’s more of an escape room like, oh, Saw, in which the players have been trapped by a malicious mastermind and must decide which player to sacrifice so that the rest of them can go free … and if you can’t decide quickly, then everybody dies.

However, not every character is interested in survival. The Lunatic wants everyone dead. The Martyr wants to sacrifice himself for another player. And in addition to your victory condition, there are some side objectives that will give you more points. Before each timed round, players choose between trust and aggression—your current status determines which types of actions you can take, from forming alliances to knocking somebody unconscious to influencing somebody’s attitude. It’s a curious twist on hidden role games. 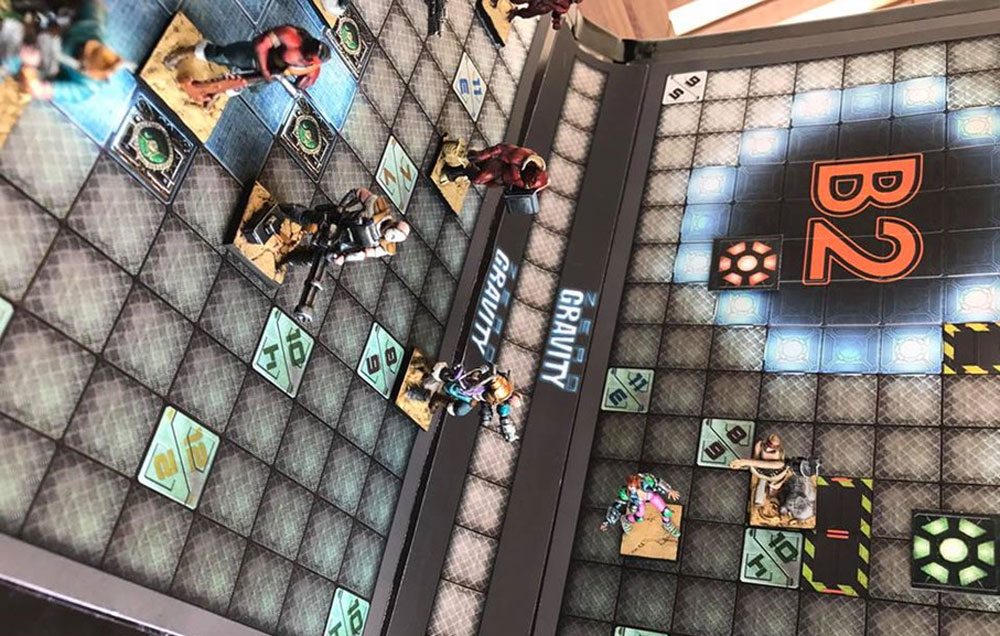 Miniatures games are always popular on Kickstarter but District Games’ Zero Gravity has something that sets it apart from the rest of the plastic invasion. Magnets! Zero Gravity a three-dimensional arena combat game, in which the minis can climb the walls and even stand on the ceiling. Thanks to a clever magnetic board, the Zero Gravity minis can go where no minis have gone before. The basic game contains four themed teams of 14 miniatures with more promised if stretch goals are unlocked. If you’re looking for a small scale miniatures combat game that’s different to anything out there, Zero Gravity might just be for you. (Robin Brooks) 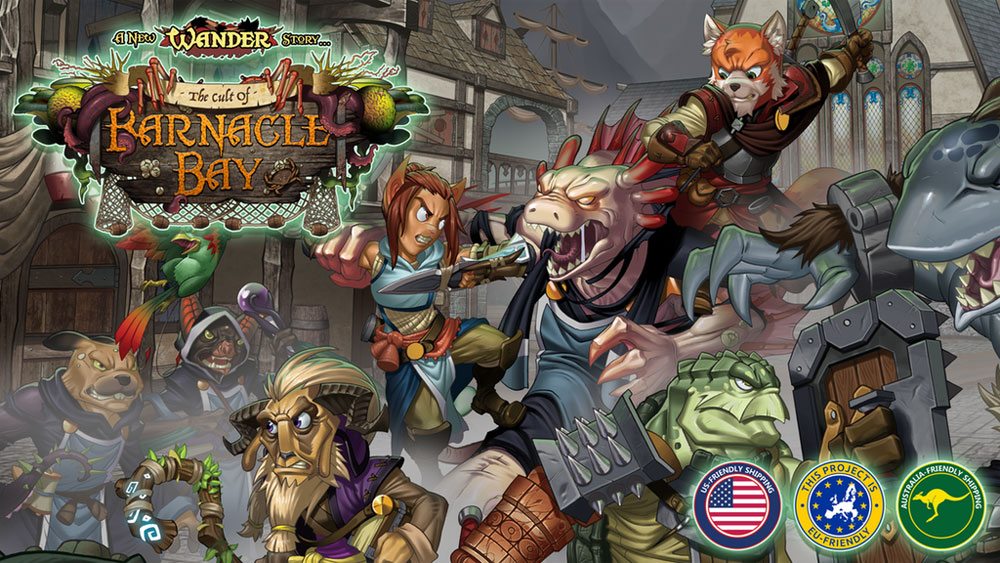 Wander: The Cult of Barnacle Bay

If you’re into Kickstarter tabletop projects for the fantastic miniatures, then this one is right up your alley. It’s a cooperative dungeon crawl with different scenarios, no DM, and weird animal hybrids from the Deep like bear sharks and rabbits with tentacle arms. The campaign will involve branching paths so you can choose the direction your heroes want to follow. Watch for a more in-depth write-up from Gerry Tolbert a little later on. 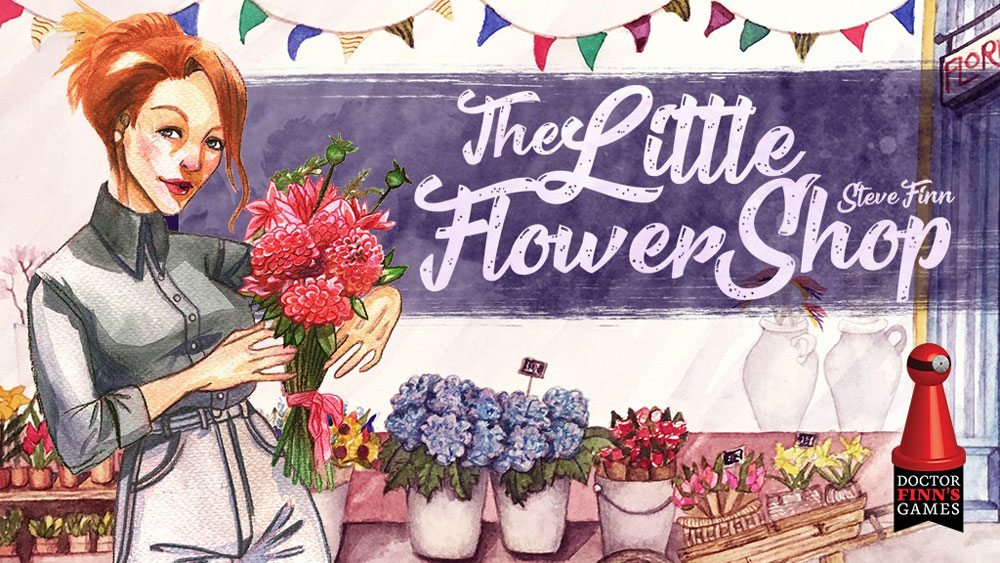 I came across this one while writing up Herbaceous, and was pleasantly surprised to see another lovely-looking game with an unusual theme from designer Steve Finn. You draft cards (pick and pass) to get the flowers, vases, and baskets you need to liven up your flower shop window. I particularly like the way the flower cards tuck behind the vase cards. Another beautiful card game, with illustrations by Sarah Wry and Rocio Ogñenovich. 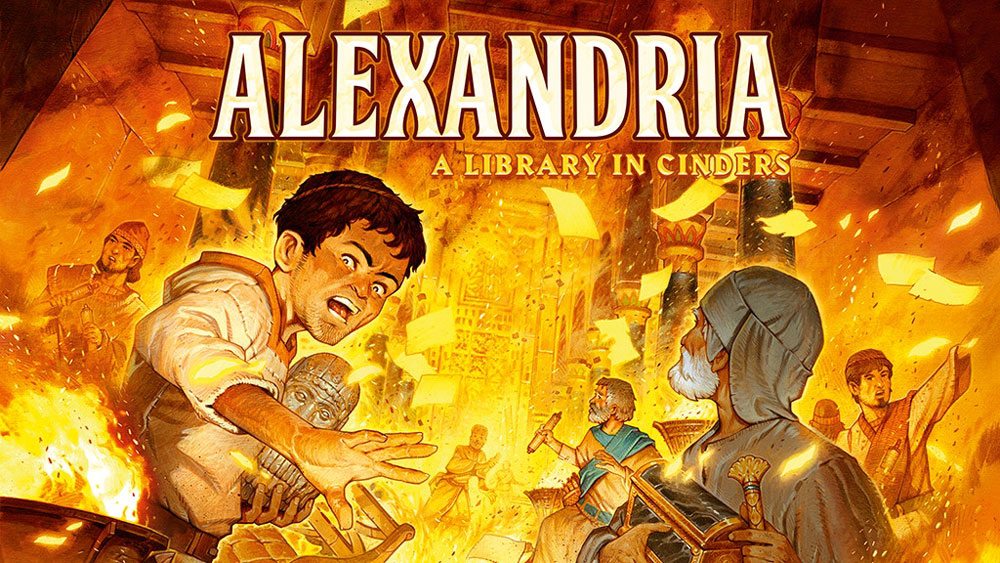 Alexandria: A Library in Cinders

I don’t know about you, but the idea of a library going up in flames is terrifying to me—which is why a game about rescuing priceless artifacts from the great library of Alexandria sounds fascinating to me. Each character has a different motivation for being in the library, and different character powers. You must manage your time well, and the library shrinks each round as rooms burn.

We’ll close out this roundup with a tabletop accessory: some fancy dice! These Constellation Dice have various constellations representing the six faces, with one Northern Sky die and one Southern Sky die, with glow-in-the-dark paint. There are also some really amazing looking fate/fudge dice, polyhedral dice, and a “Sky’s Edge” d6 featuring a black-to-dark-blue that looks like the sky as seen from Low Earth Orbit. 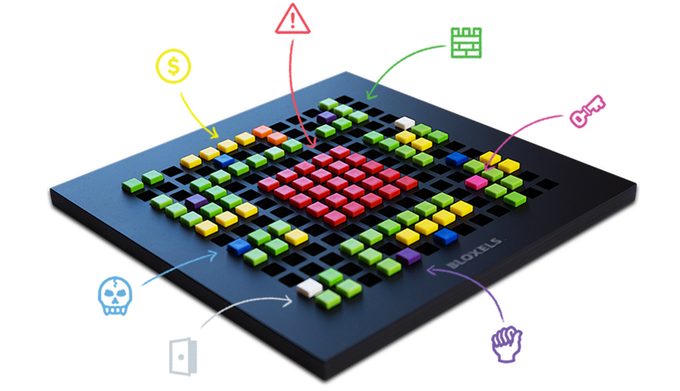 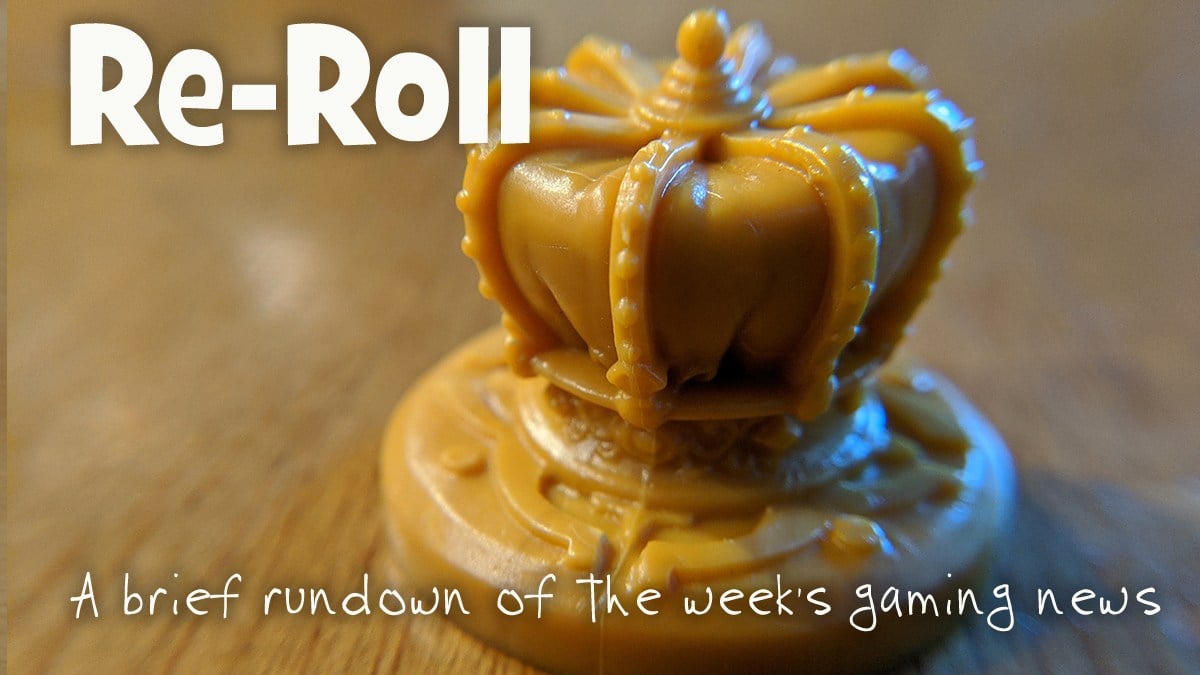