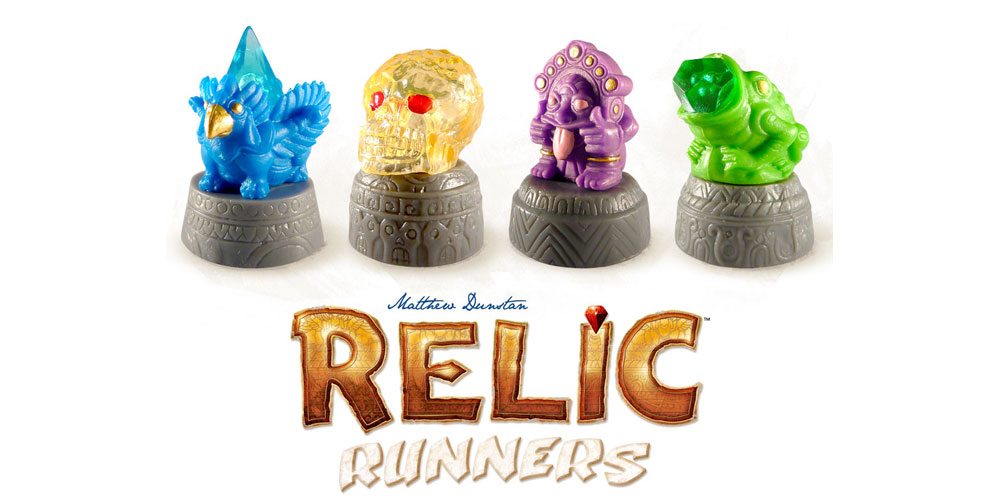 Grab your fedora and whip, it’s time to go exploring jungle ruins and deserted temples for treasure and relics in the new Days of Wonder game, Relic Runners. Word has reached the outside world that ancient relics have been discovered in the jungle and you and your fellow explorers have descended on the lost temples to see who can unearth the most treasure.

Setup is fairly straightforward: there is a board where you place a dozen multi-leveled temples. For each, there is a base, middle and top level (for two-player game it’s just two levels.) There are also eight three-level ruins and at the center of the board is your base camp.

Each player gets an explorer chart — a place to store victory coins, found relics, and the resources you need to explore the jungle. There are three items to help you during your travels: pathways, toolboxes, and ration packs.

When play begins, there are essentially two things you can do — move and explore. Beginning at base camp, you can move one space along any trail or river. Each turn you can venture further and further into the jungle, one space at a time. Movement can be extended by building pathways, which is accomplished by exploring ruins. Upon arriving at a ruin, players can spend one of their three rations packs to build a pathway adjacent to the ruin. Pathways give players a free move along that trail or river. By chaining pathways, players can move great distances across the board. 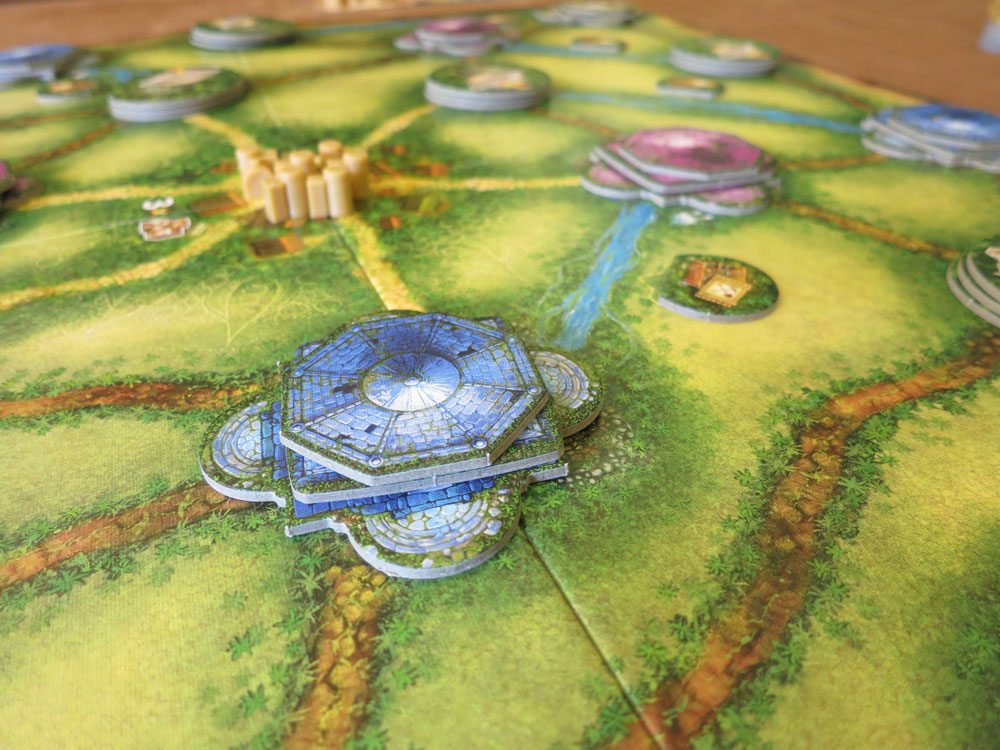 Ration packs are also used to explore temples. There are three types of temples, ivory, blue and purple. When exploring an ivory temple, a player arrives and takes the top piece, turns it over, and places it in front of him. Ivory temples give a player bonuses, permanent effects for the top layer pieces, one-time effects for the middle layer, and end-of-game bonuses for the base layer. A player may keep only one of each layer of the ivory temple, any others can be traded in for victory points.

As you explore deeper into the jungle, you will quickly run out of ration packs, forcing players to return to base camp to replenish their supplies. Pathways can make this trip a quick one, allowing players to get back to exploring quickly. Some Ivory tower effects will allow you to gather more than three rations, some will even allow you to get rations without returning to camp.

Blue temples reward victory points on all tiles, with the greatest rewards residing in the lower levels. The purple temples tiles all have immediate effects, ranging from victory points to toolbox benefits; your toolboxes award certain benefits along a progression table on the explorer’s chart. 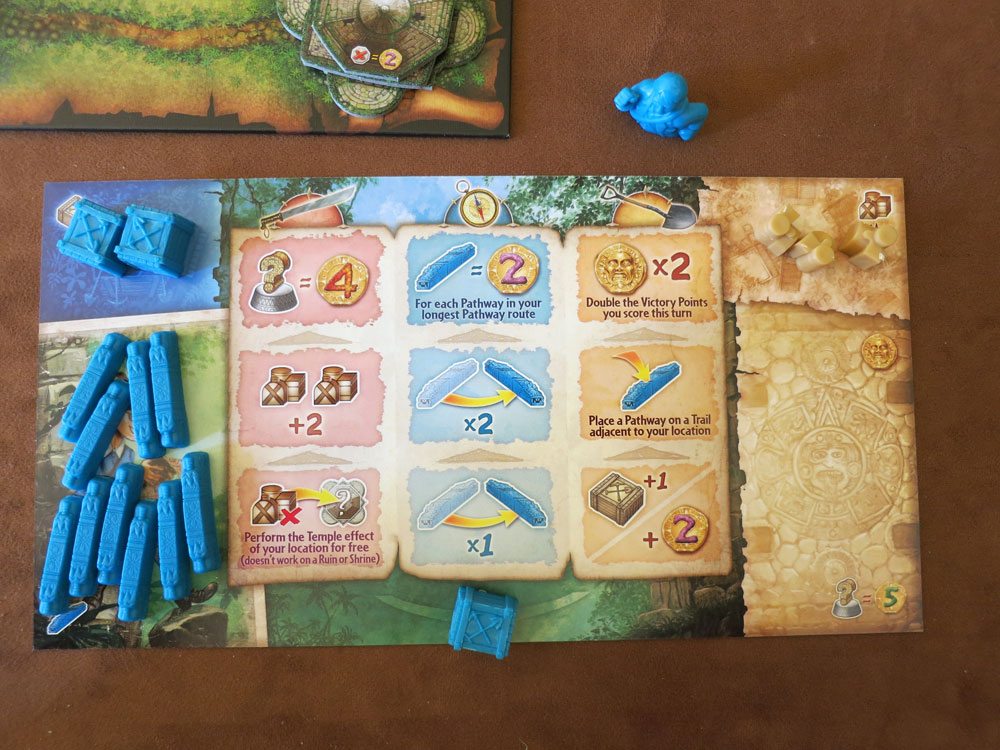 Each player has three toolboxes, but play begins with only a single toolbox in play. Players must draw special purple temple tiles or move up the explorer’s chart to bring other toolboxes into play. There are three tracks on the charts, and each provides a type of added benefit — from resupply to exploration. Players move up these tracks by movement along river trails; on these trails are toolbox tokens and, by flipping these tokens, players can progress up the explorer’s chart.

Play progresses with each player exploring the ruins and temples of the game. At some point in the game, temples and ruins will begin to become fully explored, their tiles gone from the board. It’s at this point that the relics appear, in shrines beneath the temple and the relics are placed on the board in place of the tiles. Relics are color-coded to the ruin or temple that was previously on the spot.

Relics can be recovered from the board in a way unique from other exploration. No ration is needed, but movement and pathways play an important role in their recoveries. To earn a relic, a player must begin on a location with a relic and move continuously on a single turn to another location with the same colored relic.

As a reward, players get 2 victory points for each space they moved, plus the acquisition of the ending location’s relic, which is worth five points at the end of the game. Unless a player has a tile that allows an exception, players are only awarded points for unique relics — duplicates earn no points. The game concludes when a certain number of relics are collected, depending on the number of players in the game. Every other player gets one final turn and then victory points are counted and tile bonuses are factored in; the highest total wins. 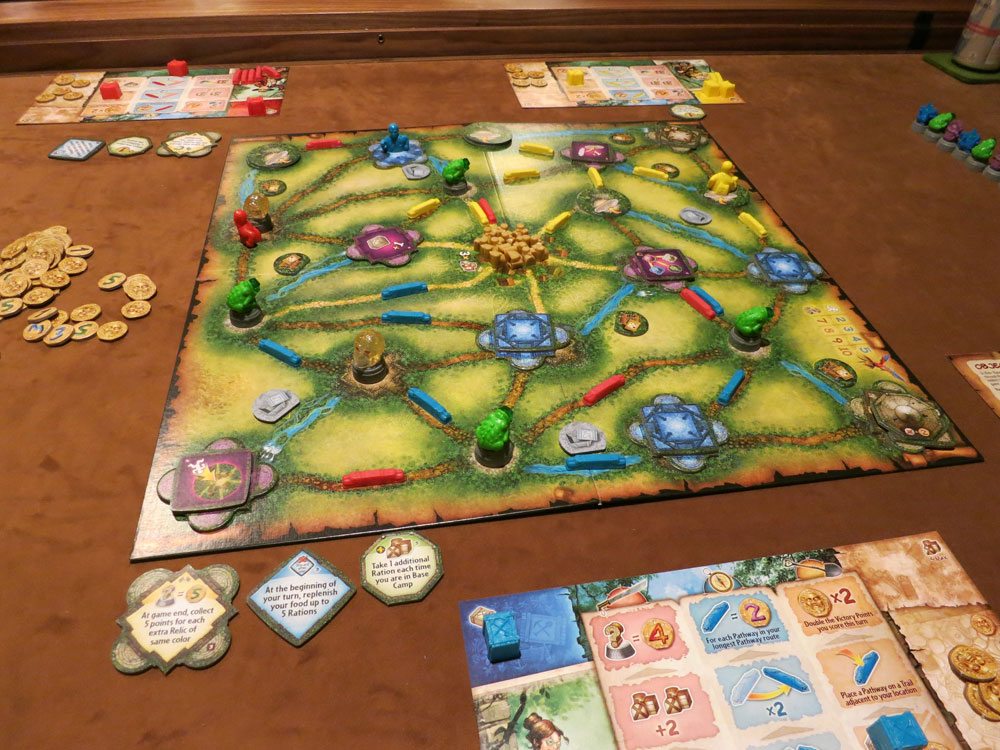 Like all Days of Wonder games, the components in Relic Runners are top-notch. Cardboard is sturdy and punches out cleanly, the relics have a high-level of detail and are fun to look at, and the instructions are easy to follow, with plenty of good illustrations and explanations. Although, some of the icons on the tiles were tough to figure out. We found ourselves constantly referring to the rule book for explanation, a problem that will likely be solved by playing the game more.

The game, which is recommended for 2-5 players age 10 or older, plays a little better with more players. In our two and three player games, we found ourselves sticking to the side of the board closer to us and not interacting much. But with four and five players, it became a bit cutthroat and was definitely more fun. Regarding the age, ten seems a little young to me. While a child this age could certainly play, he or she might miss out on some of the strategy involved. A typical game is estimated to take 40 to 80 minutes to play. Our games were so fun that we played quickly and ended up at the shorter end of that estimate every time.

Overall, we had a blast with Relic Runners. I believe it has worked its way into our regular rotation, and I’m looking forward to playing it more and exploring its depth. The exploration cards have an advanced side that gives different bonuses to different players and we haven’t spent much time playing with those yet. Our first few games haven’t used the toolboxes much, but as we all play more and gameplay tightens and becomes more competitive, I can see where the toolboxes will become more useful.

In our house, anything from Days of Wonder is an instant buy, and Relic Runners lives up to that pedigree. It’s a fun game that is perfect for families with pre-teen and older kids, and, despite the fact that it has a crystal skull, is one of my favorite new games this year.

Disclosure: GeekDad received a sample of this product for review. 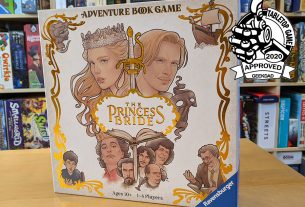 What’s That Stuff? The Chemistry Behind Everyday Products 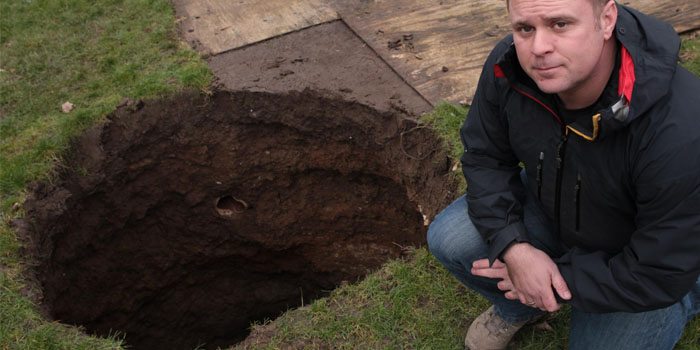