Today’s Word Nerd is a one-way error; a lot of people make the same mistake, they will substitute one word for another, but never the other way around. Personally, I suspect that bane of our existence, autocorrect.

Definitely: an absolute certainty; without doubt or second thoughts.

Defiantly: in a rebellious manner; overtly refusing to comply.

Definitely is the adverb form of definite, which became commonly used in English around 1520 or so, unchanged from the  Latin definitus, meaning  limited or precise; it’s the same word from which we get define.

Defiantly is the adverb form of defiant, which is the adjective form of defy. Defiant is a recent word, dating from 1837, from the Old French desfiant, which goes back to around 1300 and comes from  the Vulgar Latin disfidare, meaning “renounce one’s faith.” (From the Latin dis- “away” + fidus “faithful.” Over the course of the 14th century, the meaning shifted from “be disloyal” to “challenge.” Defiantly didn’t make its debut until 1859. 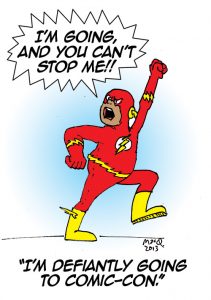 Every time I see this mistake, it’s always somebody intending to write definitely and typing defiantly instead; “I am defiantly going to turn off my computer and go to the gym,” they will say, as if to suggest that somebody has ordered them to sit there and look at cat videos all day and they have finally had enough.

Since this is the only way people ever mess up this particular pair of words, we’ll just conclude by reminding you: don’t trust your autocorrect; it’s guessing at the right word even more than you are. It knows how to spell a whole lot of words, but it never knows which is the right one. That’s your job.