Facebook has turned out to be a godsend for this little feature; at least three or four different examples of word abuse pop up in my feed every week. This is one such example.

Whether: a conditional statement, having the outcome depend on more possible decision.
Weather: the atmospheric conditions outside. 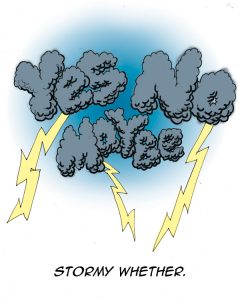 Weather is an old word, appearing before 900; it originates in Middle English, from the Old English weder;  it relates to the Dutch weder, German Wetter, Old Norse vethr.

Whether is about as old, also from prior to 900; it’s also Middle English, from the Old English hwether.

If you want to get obscure, you can add in the words wither (meaning “to shrivel up and die”), and whither (meaning “where to?”), both of which occasionally show up as substitutes for one or the other of these words.
“I haven’t decided weather or not to go” means you’ll go if you like rain.
“We’re having some bad whether” means you’re facing a lot of tough decisions.