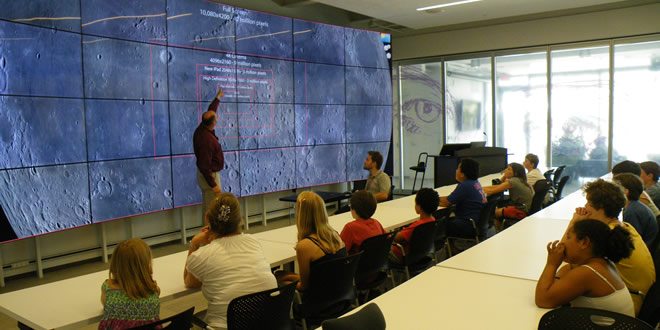 The second day of Geek Camp is in the books, and it already is clear that a week won’t be enough. Monday was wrought with too much tech setup and time reacting to the Schrödinger’s cat that is a kid’s interest. Tuesday brought more productivity in the morning and a great afternoon touring Indiana University’s tech facilities.

With 15 campers, three pets and at least one bum knee to manage this week, our carefully crafted schedule became more Disneyland map than flight plan. Our first meeting together introduced the kids to a playlist of video project ideas, which served to get them excited about shooting footage but also made game design and coding a tough sell. Only one young man spent the day iterating on Minecraft, and it wasn’t until Day Two when a camper loaded up Codecademy to try her hand at web design.

Yet to come are the hacker space, comic book day, and a game involving alka seltzer and duct tape. In the meantime, here’s a report from the field:

In the orientation session last Friday, we introduced our campers to geek project areas (gaming, coding and video production) that would be the focus of the week. Local experts talked briefly about their experiences and offered words to inspire exploration. The short history of our family camp puts emphasis on video production, a bias reflected in our choice of film to screen as a primer: Be Kind, Rewind, the 2008 Jack Black and Mos Def flick about a local video store facing eviction.

In that movie, the main characters face a dilemma when all of the video tapes on the shelf get erased. In a panic, Def gets an old video camera and convinces Black to help him re-shoot Ghostbusters before a customer returns in a few hours to rent the movie. That act of creation spawns a series of “Sweded” films and a touching revitalization of their participant community. In many ways, it is the most geeky movie we own.

As a result, Geek Camp currently boasts 8 video projects (including one uploaded that first day). The subject matter ranges from tests of iMovie effects to documentaries. One group wrote out a script for a fake movie trailer and will begin editing Wednesday afternoon. The largest effort, involving all of the kids in some capacity, is a Sweded version of their favorite film, The Hunger Games. My son, who also makes an appearance as a mythical creature in another video, co-stars as a beanie-wearing Peeta Mellark.

We truncated Tuesday’s work sessions to make time for our first field trip. Three carloads of young geeks drove to the nearby Cyberinfrastructure Building (CIB). Not yet two years old, this LEED-compliant facility houses about 600 technologists working for UITS, which services the tech needs for all 8 Indiana University campus locations across the state.

UITS formed in 1997 under the leadership of current University President Michael McRobbie, after merging several different IT departments. Now with 1000 full-time staffers, UITS has appeared multiple times on Computerworld‘s annual list of best places to work in IT. The changes go beyond Human Resources, however. In addition to the spacious open-office CIB, UITS employees benefit from the continuous improvements in technology.

“I started to work at IU in January of 2000, and we’ve made tremendous strides in display size and resolution,” says Chris Eller, the team lead for Advanced Digital Arts and Media. The IQ-Wall is a 24-screen array with a resolution of 42 million pixels, built in the CIB by Eller for about $150,000. “Five years ago, that would have cost a million dollars.”

Eller flew us around Google Earth on the array, explaining that one value of a very large display is the ability to see the “detail in context.” The same information could be viewed on a traditional monitor, but it would likely require multiple zooms in and out to understand both the detail and the context. IQ-Wall is also used at IU to stream talks, watch films and sporting events, and even play games like Portal.

“The UITS Advanced Visualization Lab interacts with a broad swath of the university and public population,” says Eller. “We get to work on interesting projects with interesting people.”

Prior to Eller’s demo, colleague Patrick Beard greeted campers with some data sets (and a Death Star!) on another unusual display, the Science On a Sphere (SOS). Built by the National Oceanic and Atmospheric Administration, the spherical screen is fed by three projectors coordinating the animation of image files. The sphere is great for viewing a myriad of interesting data, such as air traffic, light pollution, planetary surfaces, and the spread of a tsunami from the Indian Ocean. Indiana’s SOS was the 99th such installation in the world.

Our campers also got to test out cutting-edge gadgets, like NeuroSky’s Mindwave headset, which picks up brainwave signals that deal with meditation, attention and eye blinks. Tom Zeller of UITS’s Applied Technologies Lab says his job is to seek out new technology that might change the way students and staffers work at IU. Custom-crafted touchscreen displays installed throughout the campus are a byproduct of this experimentation.

Noma Maier then guided our group around the CIB, explaining the many ways in which IU has engineered a more sustainable work environment into the building. This includes white rubber roofing, exterior louvers, interior sunshades, a bike garage, and native plant landscaping.

The highlight for me, though, was a tour of the university’s new supercomputer, Big Red II. Dan Miller took us pass two levels of security clearance into large, noisy rooms with rows of computer processors. Fortunately, despite end-of-the-day jitters from a few kids, the $7.5 million machine wasn’t damaged when we left campus.

Unveiled in a dedication ceremony last April, Big Red II operates at a speed of one petaflop, making calculations in a week that a normal computer would need half a year to complete. Supercomputers first cracked this speed barrier in 2008. Today, one petaflop is only good enough to reach the top 50. The fastest U.S. computer is at Oak Ridge and runs at half the speed of the top computer in China (a peak of 55 petaflops).

Indiana is now home to the top two university-owned supercomputers. Just two months after Big Red II set the bar, rival Purdue University announced their own upgrade with the 1.3 petaflop computer Conte. The supercomputers were built for different purposes: IU is a research institution, focusing their super CPU time primarily on life sciences; Purdue’s computer is aimed as solving engineering problems. Both computers, however, bring top researchers to the state.

The participation of UITS in our Geek Camp owes to a combination of Eller’s generosity (Chris did a 3D film session for us last year) and an outreach effort by the Communications Office. Tours of the facilities are easily arranged with an email, and many events hosted at the CIB are open to the public. We thank everyone at Indiana University for filling our afternoon schedule so wonderfully.

GeekKid on the cover of Make