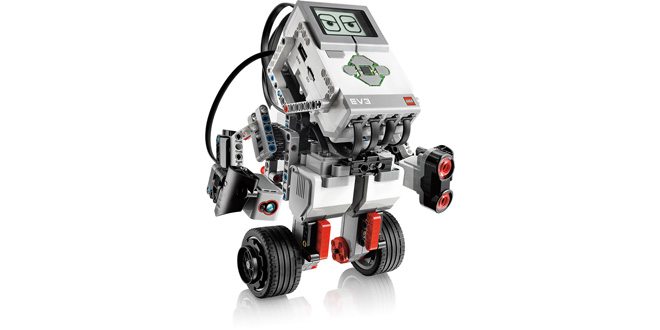 With an eye toward students returning to school in the fall, Lego announced the third iteration of its robotics system, the Lego Mindstorms EV3. The set, which is a collection of cables, sensors, servos, Lego Technic elements, and a programmable brick will be available in August 2013.

Lego Education, Lego’s division that delivers hands-on creative thinking and problem-solving exercises to schools, has offered Mindstorms programs to teachers and educators for some time, but the new EV3 platform has been developed from the ground up with education specifically in mind.

Based on feedback from more than 800 teachers, students, and educational specialists in the United States, United Kingdom, Germany and Denmark, Lego Education has created a complete platform for teaching a wide range STEM topics via a robotics curriculum.

Lesson plans have been composed, activities developed, and digital workbooks formulated that make it easy for any educator to get kids involved with robotics. Plus, the new EV3 programmable brick is so easy to use that students can construct and program a fully functioning robot within the constraints of a 45 minute class period.

The Lego Education Mindstorms EV3 includes a curriculum package with more than 30 hours of middle school classroom instruction that is packed with videos to enhance learning and application. Students are exposed to far more than just robotics; there’s an emphasis on control systems, as well as manufacturing and other real world applications that are benefited by robotics.

The learning process that’s included mirrors that of private sector scientists and engineers, giving kids more than just an education. Lessons are structured and engaging, to help ensure that students are learning, as well as having fun.

With both new users and existing customers in mind, Lego Education developed a complete package that is both easy to use and has plenty of room for growth. Assessment was very important, so digital workbooks were created to allow students to show their work and give teachers an easy and better way to identify progress. Teachers will also be able to jump from student screen to screen to monitor progress. 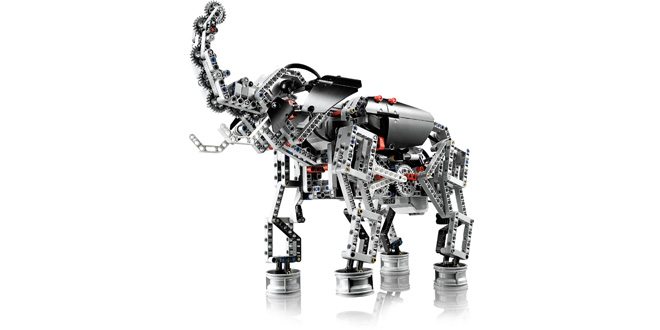 For new users, Lego Education worked toward making Mindstorms EV3 an easy entry product. In addition to extensive support, the company is providing professional development workshops to help educators get up to speed fast, even if they have no robotics or programming experience. What’s more, on launch day there will be a community for educators using Mindstorms. There, teachers will be able to share lesson plans, projects and ask questions and get answers.

The curriculum, which is called Design Engineering Projects, walks students through easy and basic tasks to more complex and advanced learning. Students will begin by designing, then building a complete robotic system. Each exercise builds on previous lessons and the focus is always on STEM.

All projects are flexible so teachers can mold a lesson to challenge advanced students, help kids having a difficult time with a concept, or customize the lesson to meet state or local requirements. There are extensive resources for teachers, including notes, activities, and worksheets, plus a Robot Educator module that provides students and educators with dozens of tutorials – and hours of class time – explaining how each Mindstorms element works and why. 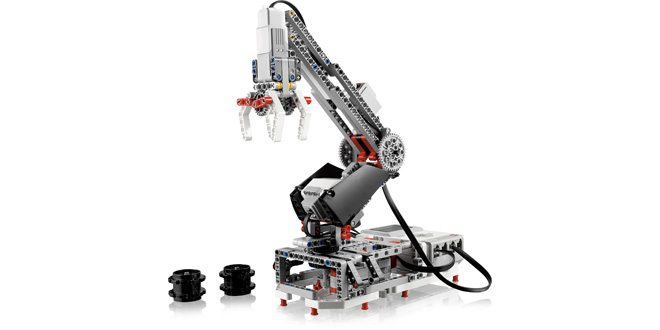 Of importance for those who have worked with Mindstorms before, especially schools that have made an investment in Mindstorms, the EV3 is backwards compatible. All the previous bricks are compatible, as are sensors, actuators, and cables. While there’s enough of a difference between the EV3 programmable brick and the previous NXT brick that daisy chaining the two generations together is not possible, you can use EV3 to program NXT bricks and the two can work in tandem with each other.

Also, because of the EV3?s increased power, some new functions will not work on the NXT brick. The new EV3 software will work on both PCs and Macs and, since it’s open source like previous NXT bricks and runs a Linux OS, educators can choose to also use National Instrument’s LabView, RobotC, or other programming languages like Java.

The EV3 programmable brick uses an ARM 9 300 MHz processor and has 16 MB of Flash memory and 64 MB of RAM (expandable to 32 GB with a mini SDHC card). There are 4 output and 4 input ports, as well as USB 2.0 for daisy chaining EV3 programmable bricks. A 178 x 128 high resolution display allows for graph reading and sensor data observation, while also allowing for basic programming via a three-color, six button interface. (On-brick programming allows up to 12 steps and is easily uploadable to the desktop environment.)

Colored lights on the p-brick give educators an immediate signal of system status, allowing for immediate assessment. Speakers are also included in the brick, which is run by six AA batteries or its included rechargeable lithium ion battery. In another nod to previous users, new batteries will work with the old chargers.

Downloadable software for the EV3 is available in 16 languages and includes plenty of great upgrades. The software is clean and intuitive and actually easier to use and program than the previous simple NXT software. With an objective in mind, students simply drag and drop commands into a string, creating a program from start to finish. It’s incredibly simple to learn, just plug in the p-brick and you’re ready to go.

The programmable brick and hardware like sensors and motors automatically recognize each other, thanks to auto-id and the hardware page of the software monitors the status of hardware elements, while recording values they output. In terms of data logging, sampling and data logging are vastly improved, making the integration of data and robot complete.

There’s an oscilloscope mode that allows for live monitoring of sensors, so students can validate setups prior to experimentation. Remote, live graphs allow analysis of performance, while a new graph programming feature allows educators to expand the possibilities of teaching.

Debugging is now part of programming and, if the EV3 recognizes a command that doesn’t match up with expected hardware, the student is immediately alerted. A content editor allows educators to modify existing projects (or create their own) and personalize digital workbooks with text, images, or video. 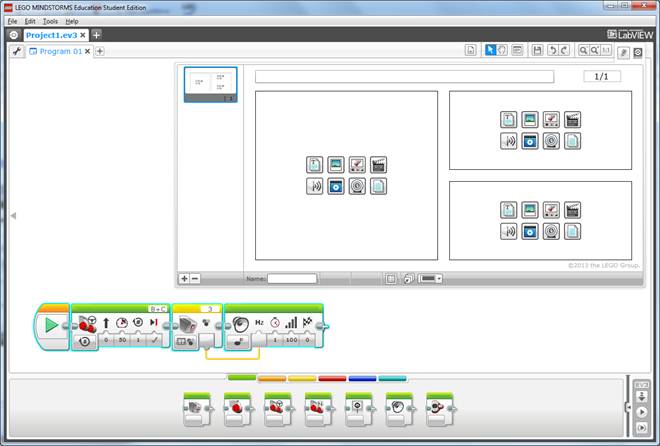 For actual programming, simple strip programming is made possible by snapping blocks together; there’s no longer any need to use the beam. Robots will appear more intelligent as measured value comparison is set aside in favor of “wait for change” programming, creating robots that react according to their environment. Similarly, greater possibilities abound with the addition of loop interruption.

The Lego Education version of EV3 will ship with lots of great hardware too. In addition to two large servos and a new medium servo motor, the Education EV3 will also deliver two touch sensors, a gyro sensor, an improved color sensor that recognizes seven colors and no color, a new ultrasonic sensor, and WiFi and Bluetooth dongles.

Wheels, gears, bricks, a ball wheel, and connectors complete the core set. Bricks have been improved for sturdier mounting and expansion sensors, motors and bricks will also be available. An IR sensor will match up with a four channel IR beacon, which will be available as an expansion in the education set.

What has long been the industry standard for educational robotics has been improved and simplified. An incredible curriculum has been developed with the assistance of hundreds of educators and all of it is dynamically customizable.

If you’re an educator in a private or public school, if you home school your kids, or run an after school or summer school program, check out the new Lego Mindstorms EV3. It’s an excellent platform for teaching STEM and educating kids about programming, robotics, and their real world applications. And, besides, robots are just a heckuva lot of fun.

#CutForBieber Is Not a Joke. Self-harm Is a Serious Problem