Cedric Chong (maxixe on BoardGameGeek) has posted a series of comics-style game session reports. He might not be the first to do this sort of thing, but I was enthralled by his most recent post, “Save Garven Dreis.” It’s a play session of the Star Wars: X-Wing Miniatures Game with some visual extras. He adds captions and speech bubbles, showing how the game played out and then spicing it up with blaster and explosion effects. Oh, and that starfield playing mat isn’t a bad touch, either. Chong has also used his comics-style session reporting for a few other games, including Super Dungeon Explore, Leviathans, and Summoner Wars. Obviously it looks a little more exciting when it’s a game with cool miniatures, so Summoner Wars isn’t quite as fun to look at. The images are followed up with a brief text description of the game and turn order. He’s been adding to the visual effects: some of the earlier reports don’t have all of the explosions and fire that this one does. A frame from a Leviathans session report. Image: Cedric Chong

Check out the rest of the X-Wing battle, and then hit this link for more of Chong’s session reports. They do take a little while to load, but it’s a really fun way to see how a game played out! 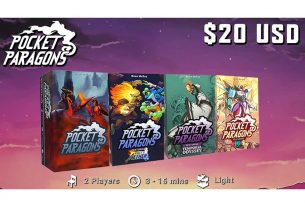