My son had to build a trebuchet for a school science project. It turned into a case of trial and error—and error.

Amazing as it may seem, I’d never actually built a trebuchet. I know, I know, I’m not sure how it happened either. But it wasn’t like I was totally in the dark. A trebuchet is a relatively simple medieval projectile weapon. Basically, a weight swings an arm around and slings something outward. Except … I realized I’d never learned how a sling works. And that provided a unique opportunity for me and my son to do a little problem solving. I decided not to look it up. I told my son that we should just get building, and we’d figure it out together.

Working from drawings his teacher gave him (and inch-thick Trupan fiberboard from my workshop), my son put together the main structure in about an hour. Its arm, weighted with ball bearings, swung on a nice pivot. We cut a piece of leather into a cradle to hold the projectile. I figured that one end of the sling had to be attached to the swing arm while the other end had to come free as the arm reached the top of its arc. But how?

Drawing ideas at the whiteboard, my son had the same hunch I did: Attach one end of the sling to a hook that it could slide off of. We made a small wooden hook and attached it to the arm. One end of the sling got tied to the arm, and we tied a loop in the other end to go around the hook. Time to test-fire: We put a 1-inch ball bearing into the sling, lifted the weighted end of the swing arm, released it, and …

Total, hilarious failure. The sling neatly whipped that sucker straight down onto the table. Made a little dent. It was awesome—loud, and with a lot of force. So at my son’s suggestion, we gentled the angle of the hook from 90 degrees to 45. Again we loaded the sling, lifted the weight, and …

Again, failure. Instead of smacking the table, the sling released too early. But we were getting somewhere. The right solution occurred to us at exactly the same moment—the proper hook wasn’t a hook at all, but just a little stick jutting out from the end of the swing arm. Hang the looped end of the sling on it and the loop will slip off at the peak of the arc, launching the projectile. We set it up, lifted the weight, and … SUCCESS! 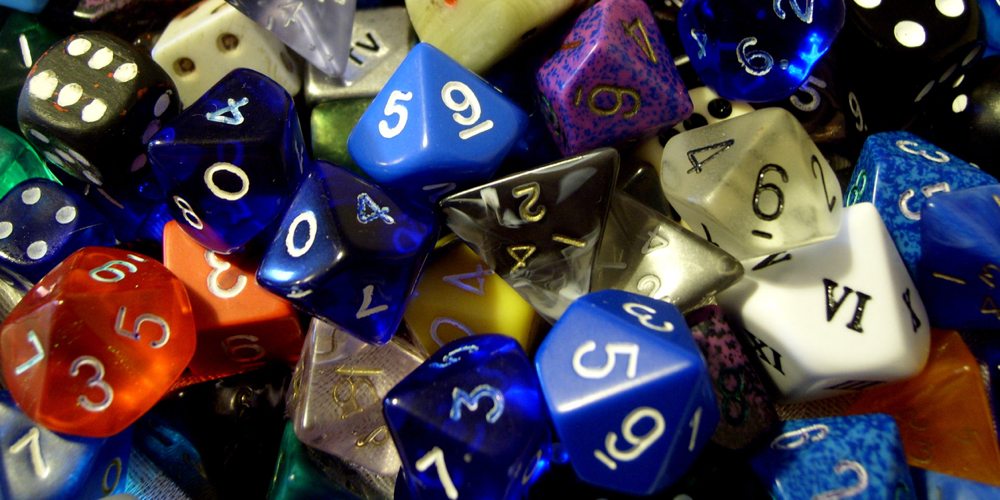 Rolling Dice When We Have No Dice