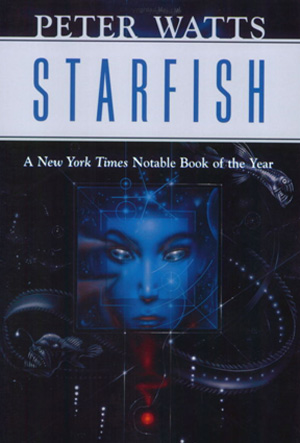 In the not-too-distant future, a group of workers called rifters man power-generating stations on the ocean floor. But it’s not a job for normal people — the pressures of the undersea realm, both physical and psychological, tend to destroy ordinary folk. Only "pre-adapted" workers survive in that environment — basically maladjusted, sociopathic misfits: wife beaters, depressives, abuse victims.

The first part of Starfish introduces us to the new world of Beebe Station, the undersea power plant near the Channer Vent. The facility is so far down that the rifters must be borged up in order to survive. The main character, Lenie Clark serves as the de facto leader of the station, though oftentimes it seems more like anarchy than any sort of hierarchy — the rifters ignore work schedules, doing maintenance work whenever they can fine enough people who are awake and interested in working.

Needless to say, the rifters face a pretty hostile environment. The undersea lifeforms equate light with food, so they attack Beebe Station itself, since it’s engulfed in flood lamps, and they attack the rifters unless they douse lights and rely only on night vision contacts. The constant pressure and the claustrophobic station add to the stress.

At first, I had a hard time relating to the rifters — Watts depicts them as true outcasts, and therefore difficult to like. There’s a bully and a child molester. One of the rifters is described as being so dangerous, the world is safer with him on Beebe. However, as the story evolved, and as the characters come to trust one another, I found myself appreciating their respective abilities — I wouldn’t go so far as to say I liked them, however.

The second half of the book mainly focuses on developments on the surface. Psychologist Yves Scanlon, who originally vetted Beebe’s crew, finds himself on a sub, being sent to the station to evaluate the psychological condition of the rifters — for it is apparent the crew have begun to change in odd ways, to begin to actually like it down there. When Scanlon arrives it is he who is the outsider, shunned by the crew.

Eventually, it comes to the attention of the corporation that the rifters may have inadvertently discovered a secret so dangerous that it threatens life as we know it. I won’t describe it any more for fear of playing the spoiler, but believe me when I say the idea is fascinating, original and earth-shattering. A great payoff for an excellent book.

WIRED: A fun read. Watts describes an utterly plausible cyberpunk-esque future filled with humanity as well as plausible technology. The setting’s details were right, not forced. Starfish combines elements of psychological thrillers and hard sci fi — the author thoroughly researched the technical aspects of his story and even provides a list of sources at the end.

TIRED: Some of the psychological ins and outs seemed like macguffins to me, setting the mood rather than providing the focus of the story. The area that seemed the weakest: dialogue, a frequent first novel Achilles’ heel.

Note: This book is the first of a 4-book ‘trilogy,’ and I haven’t read the others.