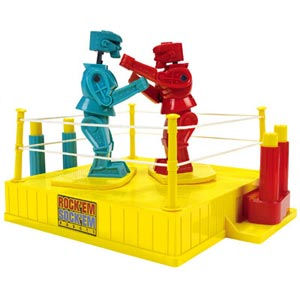 There was a time when I seriously thought robots would take over the world. Ya know, all the movies and stuff like Terminator and Robocop, they had me scared. I hoped that by learning to control them that I could spare myself from the carnage, but I realize that there is no chance of them getting that far. All we have to do is compare the Robots with the Jocks and it will be evident who wins.

7. Track and Field: Have you ever seen that Honda Asimo walk in the car commercials? Even a cheerleader on crutches can outrun him. We won’t go into how far he can jump.
6. Swimming: Electronics, water, need I say more?
5. Racing: This video shows me that maybe a robot can race, but really, what happens when they win and someone pours champagne over their circuits. And can they really compete with the charm and experience of Carl Edwards, Kenny Wallace, or Dale Earnhardt Jr.?
4. Soccer: I saw on the intertubes where robots try to play soccer, but like that Asimo dude above, they are so slow a passed out frat boy could play goalie.
3. Football: The google doesn’t know the difference between Soccer and Football. As far as I can tell robots don’t play football.
2. Baseball: Swing batter, batter. Maybe they can pitch and bat, but can you imagine waiting for them to round the bases?
1. Boxing: Rock ‘Em Sock ‘Em ROBOTS. Do you really think these little plastic guys would do any damage to Tyson?

Can you think of any more reasons that we’re safe from the Robots?

Kinect Rush Is a Game for the Whole Family