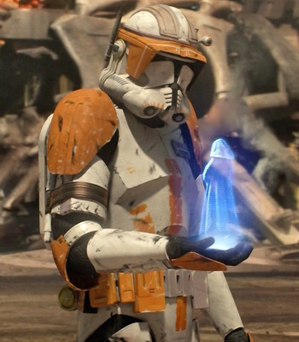 It’s fair to say that longtime fans have greeted Star Wars: The Clone Wars dubiously.  Allegedly playful Master-Padawan banter such as "Snips" and "Sky-Guy" is enough to leave anyone pining for the merely wooden interplay between Hayden Christiansen and Natalie Portman.

But I think it’s also fair to say that kids love the clone troopers, particularly Cody and Rex.  (There’s probably an allegory there about supporting the troops, but that’s slightly to one side of my point here.) Our 5-yr-old can’t stay up to see The Clone Wars–but he made sure I set our DVR to "Record Entire Season." (Yesterday the Cartoon Network announced they’ll re-run the shows on Saturday mornings, which is more kid-friendly.)  Like every fourth kid in our city, he dressed as Commander Cody for Halloween.

That night has turned our kid into a miniature cultural historian.  The husband at the third house we visited had never heard of any Clone Commander Cody, but he immediately asked my boy if he knew Commander Cody and His Lost Planet Airmen, or if he’d seen Commando Cody.  Alas, he had not.

Mercifully, the internet is a multimedia wonderland, so here are some fun clips that bring together the Commander Cody backstory: 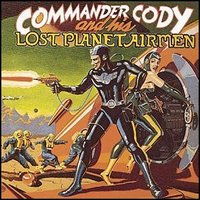 Admittedly, I haven’t worked out a proper connection between a country rock band and the hyper-contemporary Star Wars: The Clone Wars, but there’s almost no question that Commander Cody hearkens back to this serial star.

What’s fun about all this is that a five-year-old can grasp how this allusion works: "Oh, The Clone Wars are like Radar Men from the Moon.  Maybe Commando Cody is Commander Cody’s grandfather!"  And he really likes the idea that he can talk to the neighbor now about their respective Commander Codys, and about the kinds of pop culture they enjoy. So while I’m not crazy about Star Wars: The Clone Wars, +1 to George Lucas for teaching the kids about the layered history of our mass culture.