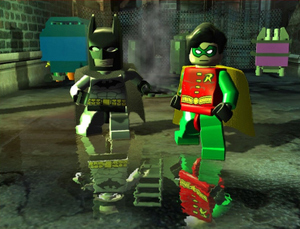 I was a tiny bit skeptical about LEGO Batman: The Videogame. I knew it would be fun, because the previous LEGO videogames had been such a blast. The question really was whether they could make it different enough from the other games that it would be worth the money, while at the same time having enough Batman content to please fans.

My doubts were quickly erased. Whereas for LEGO Indiana Jones they added the ability to pick up and use objects, in this game even more has changed. While characters actually can’t pick up objects, there are suits with different powers that Batman and Robin can use (which are of course necessary to solving certain puzzles), and, more significantly, you play as the villains in half of the game. No more do you have to get that little thrill from playing the evil characters only during Free Play — now you actually have to do so as part of the story.

As for Batman content, there’s plenty. The villains include the obvious ones like Joker, Catwoman, Riddler, and Penguin (and plenty more), but also relatively obscure ones like Mad Hatter, Man-Bat and even Killer Moth! It feels to me as though the game creators took more inspiration from the animated series than from the comic books, movies or other TV shows, but I’m not sure why I feel that way.

As you’d expect from a game in which you play a LEGO minifig, the tone is light. They play the Danny Elfman theme, but that’s about as dark as it gets — there are funny bits in every cut scene, and of course the worst thing that can happen to your characters is that their pieces fly apart. There is plenty of cartoon violence and projectiles are thrown and fired, but there’s nothing too objectionable, especially considering that the characters are so obviously not meant to be real human beings. The only reason I might think twice about letting my five-year-old play the game is that she’s never played a game like it before and would probably get frustrated by it very quickly. 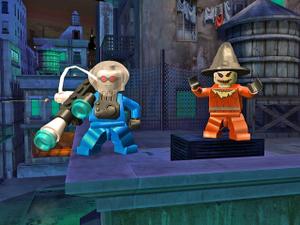 All the features you’re used to if you’ve played any of the previous LEGO videogames are here: you can piece together your own characters, you can buy extras and characters after unlocking them, and you can view past cut scenes. Newly added features include the ability to buy vehicles, gadgets, and upgrades to the various suits as well as characters and the somewhat odd ability to buy information about the Batman characters. All of these are of course paid for with the LEGO studs you collect during the game. As with the Indiana Jones game, where you collected pieces of artifacts, here you collect pieces of LEGO minikits, which are then displayed in a room very similar to the artifact room from that game. It looks like there’s at least one hidden level reachable via that room, just as there was in the previous game, too.

In summary, it’s an excellent game, and well worth the money. I suspect the gameplay would be a bit better than I’ve found it so far if I played it with someone else; the A.I. too often has the unplayed character either stand still when you want them to follow you, or follow you when you want them to stay where you carefully placed them. But even so, it’s still a heck of a lot of fun, and you couldn’t ask for more than that.

Platform-specific note: I played the Wii version of the game, and the game runs very well on that platform. The creators did use the Wii’s unique interface to good advantage, in that you aim the batarang (and Robin’s equivalent) by pointing the remote where you want it to go. You can also swing the remote to throw the batarang or a punch, but I find it easier to just use the button.