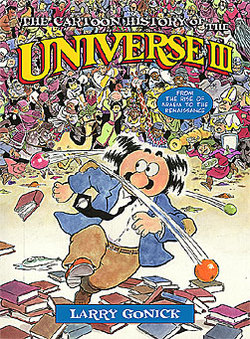 —probably about 11 or 12—but I remember thinking that it was the first time I’d laughed repeatedly while reading about history.  I probably learned, and actually absorbed, more from that book and the other Larry Gonick books I read later, than I did from any of the textbooks I had in school.  And I had fun doing it.

Gonick’s style not only teaches, but also illustrates important concepts–for instance, in his histories, he does a great deal to show cause and effect, and helps relate history to modern life.  He backs up all of his books with research, and each book concludes with an extensive bibliography which is itself written in cartoon and which encourages readers to read more about the subjects at hand.

!  I haven’t read all of them, but based on the ones I have, I can pretty much guarantee they’ll be among the few (if indeed there are any other) genuinely 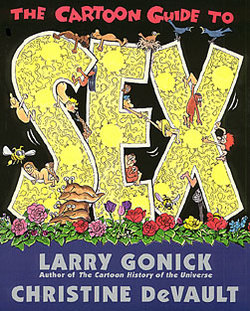 informative books that your kids will want to read, and reread.  They’re not just for kids, either–I read The Cartoon History of the Universe III

just last year and I found myself laughing at a lot of jokes I’m sure I wouldn’t have gotten when I was in my tween or teen years.  I have no doubt that if I went back and reread the older books (and if I can find them in my vast collection of books, I will), I would find that I missed a lot.

There are some books that teach, or try to teach, kids without them realizing they’re being taught.  Gonick’s books aren’t subtle or devious in any way–quite the opposite, really–but they get the information across exceptionally well.  I haven’t seen anything else quite like them.