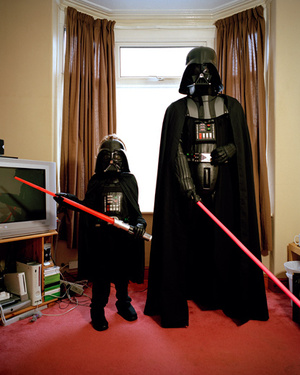 Photographer Steve Schofield has assembled a gallery on his website with pictures of science fiction and other kinds of geeks (including some families) who like to dress up as their favorite characters, usually at home or in mundane surroundings.  The effect is profound, and perhaps sometimes a bit sad.

My practice is concerned with exploring the fascination that the British public has with American popular culture and the sub-cultural world of fandom. In the images, I have shown people in their own homes and environments wearing costumes that they would be dressed in to attend events with other like-minded individuals. It seeks to offer a glimpse into seemingly ordinary lives of my subjects and allows the private to become public.