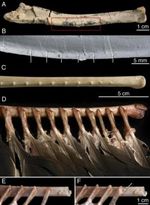 It’s confirmed! (And Steven Spielberg had it all wrong.) Velociraptor had feathers.

This is something suspected for a while, and depicted in countless illustrations, but researchers at the American Museum of Natural History have just published a paper in Science that floats very convincing evidence and should force a remake of Jurassic Park.

The bones of a Mongolian specimen of Velociraptor have revealed quill knobs on the arm bones, something that is only found on feathered animals, i.e., birds.

"The more that we learn about these animals the more we find that there is basically no difference between birds and their closely related dinosaur ancestors like velociraptor,” said Mark Norell, a Curator in the Division of Paleontology at the American Museum of Natural History and co-author on the study. “Both have wishbones, brooded their nests, possess hollow bones, and were covered in feathers. If animals like velociraptor were alive today our first impression would be that they were just very unusual looking birds”.

This is even better than finding out that T-Rex was related to chickens.