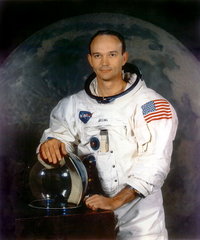 Thirty-nine years ago, on July 16, 1969, three ultra-geeks set off for Luna, Earth’s moon.  Their mission was called Apollo 11.  This is widely considered one of the greatest accomplishments of the United States, but is rarely recognized outside of a brief mention on the news, or a quick photo-op with the president.  When the mission is mentioned, the focus is usually upon Buzz Aldrin and Neil Armstrong the first men to walk upon the Lunar Surface.  While Amrstrong and Aldrin did this, there was a third member of their crew piloting the Command Module in Lunar Orbit, making sure that they would be able to get home: Michael Collins.

Collins was born on Halloween in 1930, and was an army brat.  His father was a major general, and so he moved from city to city, and country to country.  When it came time for Michael to think about military service, he quickly decided that it could not be the Army.  Aside from his father being a major general, Collins’ uncle was J. Lawton Collins, the Army’s Chief of Staff.  Thus, to avoid suspicions of nepotism, he fatefully chose the Air Force.

On February 20, 1962, John Glenn flew the Mercury Atlas 6 mission around the world in 90 minutes.  This inspired Collins to immediately apply to NASA’s astronaut program.  Collins did not make it into the Mercury Program, but did make it into Gemini and Apollo.  In Gemini, Collins and John Young flew the Gemini 10 mission performing EVAs and target vehicle rendesvous.  In Apollo, Deke Slayton tagged Collins early on as a CMP, or Command Module Pilot, because of his extensive experience with experimental craft.  As the bad goes with the good, it also happened that around this time that when the Apollo 1 disaster happened, it fell to Collins to go the Chaffee household to tell Martha that her husband Roger died in the fire.

Collins was also the CapCom for the Apollo 8 mission.  The role of the CapCom was to be the central communication point between the crew and Mission Control.  Collins’ herniated disk caused a shifting of crews which resulted in him being bumped from that mission, but it meant that he’d gone through the same training as the Apollo 8 crew.  It’s important to note that, for many Americans, Apollo 8 was the bright shining light in a year that saw the assassinations of Martin Luther King and Robert Kennedy, riots in Chicago during the Democratic National Convention, political unrest in Poland and France as well as the U.S., the bloody Tet Offensive in Vietnam, and the debut of Laugh-in which dislodged the original Star Trek series from it’s prime-time slot and signaled the series’ end.  Seriously, it was a grim year, and on Christmas Eve, three Americans went to the far side of the Moon, saw our world as one, small globe and read from Genesis.

Shortly after Apollo 8′s success the crew of Apollo 11 was announced.  Collins was on the list as the CMP.  Aside from his mountainous duties as the CMP, and the only human orbiting Luna while Aldrin and Armstrong did their thing on the surface, Collins also designed the Mission Patch.  Though he never experienced the glory of walking upon the Moon, he still felt an integral part of the mission.  From the Wikipedia article:

During his day of solo flying around the Moon, Collins never felt lonely. Although it had been said that "not since Adam has any human known such solitude", Collins felt very much a part of the mission. In his autobiography he wrote that "this venture has been structured for three men, and I consider my third to be as necessary as either of the other two". During the 48 minutes of each orbit that he was out of radio contact with Earth, the feeling was not loneliness, but as "awareness, anticipation, satisfaction, confidence, almost exultation".

After spending so much time with the CSM, Collins felt compelled to leave his mark on her, so during their second night on Earth, he went to the lower equipment bay of the CM and wrote:

No New TableTop, but Still Some Exciting News from Geek & Sundry