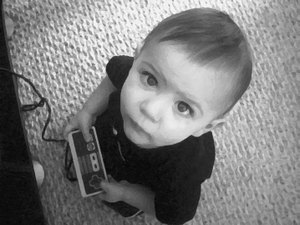 An unfamiliar sales clerk smiled and chirped to me that the store would be hosting a midnight launch event. He was obviously excited by the prospect of picking up the game early and seemed sure I would be too. I smiled back politely. As he handed me my pre-order receipt, he asserted that he’d see me there.

"Or not," piped in the manager, a guy named Roy who’s been manning this particular Gamestop for as long as I’ve been frequenting it. He shot me a jovial look and a knowing nod as I stepped out the door, leaving the green clerk slightly perplexed.

I would not be at the midnight launch event. I never am.

I am a gamer. I have been since the Golden Age (and subsequent crash) of the 2600. But I am also a dad. And though I’ve got considerably less years under my belt as the latter, it takes priority. As a result, midnight game launches, all night LAN parties, and days-long campouts for console releases are simply relics of my past.

In a world where gamers are either "hardcore" or "casual," I represent an oft-ignored third option.

Hit the jump to get your game on.

When I was a kid chucking quarters into that massive cabinet in the corner of my local arcade, I could think of nothing grander than the prospect of one day being able to play multiplayer masterpieces like Gauntlet not just with kids in our meager shop, but with likeminded gamers around the world. It was, at the time, a silly dream, the kind of thing you’d talk about in hushed and winsome tones when your friends slept over and you’d already been relegated to you room for making too much after-hours noise in the den. It was a time when technology, as wondrous as it seemed, had scarcely scratched the surface of the collective imagination of geekdom.

Unfortunately, when such gaming experiences finally became reality, I was a struggling student without the means to enjoy this modern miracle. By the time my wallet was sufficiently fat to accommodate such endeavors, I found myself a little less willing to share my game time. It seemed that my dedication to gaming as a social exercise had dulled considerably since the demise of the arcade. I had become a lone creature of habit, a solo gamer that would rather plow through a strategy title on his own than join an MMORPG guild or partake in an FPS death-match. Don’t get me wrong, I’d gladly participate in the occasional (and aforementioned) LAN party, but it wasn’t generally my first choice. My playing time had become my private time. Me time. Time to relax and unwind.

I was still a gamer, but my arena was now the lonely handheld, the solitary comfort of the console adventure, the classic PC sim.

As I became a husband and father, another peculiar wrinkle insinuated itself into the equation. My wife isn’t much of a gamer, aside from the occasional puzzler or retro platformer, and my kids, while interested, are too young to fully participate. This essentially means that I continue to game alone, but now have considerably less time to devote to my hobby.

Yet if there’s one thing we gamers know, its that there’s always a way.

Fellow GeekDad Paul Govan recently posted in his blog Game People a series entitled Family Gamer. In article 1.6, "Fitting Games In," Paul touts the joys of "porcelain gaming." He admits to getting in some playtime when giving his kids a bath and whilst on the throne. As a member of this proud fraternity, I bow before his honesty, not to mention his subtlety. The bathroom is very much the refuge of the family gamer, but not all of my gaming takes place in this Fortress of Solitude.

When the kids are napping, when my wife is trying on clothes at a department store, when I’m waiting for the ding of the microwave to remind me that the bottles have finished sterilizing: these are some of my proudest contemporary gaming moments. These are the times that have seen me defeat epic bosses, solve countless jump puzzles, and rescue many a continually (inexplicably?) hapless princess.

In short, I make time for gaming, in whatever increments or locales permissible. I do it not to reclaim the outmoded title of 1337 or boost a Gamerscore; I do it for a love of the hobby. I play for the oft cliché "love of the game."

The original videogame generation is growing up and evolving into a more flexible creature, but the overall outlook of the industry and of the culture seems to be fairly rigid and polarized. You are either with us, a connoisseur of the obligatorily hardcore, or against us, a member of the rising casual gaming crowd. But there are those of us who simply game to game. We’re not looking to buy into a lifestyle that fits so clearly into a business model, merely to enjoy an age-old pastime to the fullest extent our busy schedules allow.

We are family gamers, but more than that we are legacy gamers who were reared on the concept of videogames as a viable form of personal entertainment from its earliest days, and we are just as comfortable jacking cars in Liberty City as playing the umpteenth Bejeweled clone on our cell phone in the supermarket. We gamed as children and teens, and we still game as adults. The systems, titles, and genres may change, but that core passion remains.

While it’s often more a shortage of time than money, we sometimes commit to a single system, but we don’t shy away from the others. We’re not Nintendo fanboys or Microsoft fanboys or Sony fanboys, despite what our Amazon purchase history may lead one to believe. We’re gaming fanboys. We play, like any other gamers, to decompress after a hard day or while away a few idle hours.

And while our gaming is often more solitary than social and much more measured than that of the newer gamer generation unfettered by our familial obligations, we still play to win.

Look Us Up! GeekDad Makes the 2009 Internet Directory