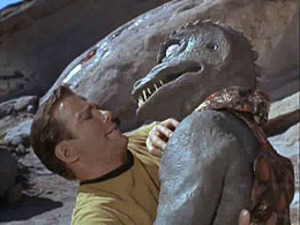 I’m only showing my little geek-pup the best of the series, after all.  This classic episode gives us that rarest combination of high-flying science fiction adventure, combined with a primal struggle of man versus beast.

So, the Enterprise heads to an outpost on the distant world of Cestus III on an invitation.  They get there to discover that the outpost is destroyed, and the invitation was obviously a fake.  They hit back at the mysterious aliens (the Gorn), who promptly retreat.  The Enterprise pursues, but both ships are halted in their tracks by the mysterious Metrons (no relationship to the researcher of the New Gods).  The Metrons are more or less Q-class aliens.  They can move time, space, create planets for sick mortal combats — you get the idea.  They insist that Kirk and the Gorn captain are savage, and must settle their differences in a manner more acceptable to the super-civilized Metrons — they are forced into mortal combat on an uninhabited world.  They might be civilized, but they apparently are really into reality TV.  So Kirk and the Gorn must fight each other using only the crude weapons they can fashion from the environment around them.  The super-strong Gorn fashions a crude knife, and some traps.  Kirk manages to gather coal, sulphur, and potassium nitrate for gunpowder (apparently in the 22nd Century they’ve figured out how to skip the part where you carefully mix the ingredients in the right proportion in a solution which is then boiled down to a cake and broken down into powder).  Melee weapons + firearms = defeated lizard man.  Kirk wins, but refuses to kill the Gorn.  A representative of the Metrons, who looks like David Bowie’s effete cousin, appears to give Kirk the thumbs up and send him on his way.

Great stuff, even if the gunpowder recipe is worse than what you’d see on MacGyver, there’s still that archetypical struggle of the quick and clever (Kirk) versus the brutally strong and resilient (Gorn captain).

She found the fight with the Gorn quite effective and compelling.  "C’mon!  Run!" she said to Kirk on more than one occassion.  This one’s a keeper.

My Kid Designed A Space Settlement Over the Holiday Break