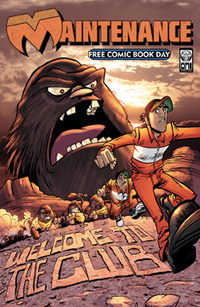 Spring is officially upon us and the month of April already half spent,  so GeekDads everywhere are now turning their thoughts to this year’s Free Comic Book Day. For the seventh consecutive year, comic shops and publishers, in an effort continually coordinated by Diamond Comic Distributors, seek to court new readers and thank current devotees via the tried-and-true method of plying them with free stuff.

With FCBD ’08 slated for May 3rd, and taking the event’s motto “Save the Date!” to heart, we at GeekDad thought it appropriate to present a series of posts leading up to this year’s festivities. Along the way we’ll explore a little Free Comic Book Day history, talk a bit about pre-event planning, and, hopefully, inspire parents and their respective geeklings to take full advantage of this most sanctified of nerd holidays.

Obviously, the most important element of Free Comic Book Day is the comics themselves. Sadly, not all comics are free on FCBD. Each year publishers provide a selection of special books at cost to retailers. These are then given away for free to eager fans young and old.

These complimentary titles are broken down into two categories: Gold Books, which are available at all participating retailers, and Silver Books, which may vary from store to store. Rather than linger over each of the individual comics in question, it seems much more pertinent to pick the collective brain of the GeekDad community for suggestions as to which books to pick up.

Personally, I’m pleased to see that a reprint of the debut issue of one of my favorite new titles, Jim Massey and Robbi Rodriguez’s Maintenance, is listed among the Silver level books. This Oni Press series tells the story of Doug and Manny, two janitors at the world’s foremost evil genius think tank. Admittedly, there’s a little swearing and some odd bits of violence that keep this book from being what we generally deem “kid friendly,” but it’s just the thing for older readers looking for something outside the bounds of typical guy-in-tights fare. It’s got comedy, action, cavemen, sharkmen, and, of course, industrial cleansers. It’s a keeper.

Which of this year’s titles are you planning to pick up, and what were some of your favorite finds from FCBDs past?

Whiteboard HD App Review: Chalk This One Up As a Firm “Maybe”