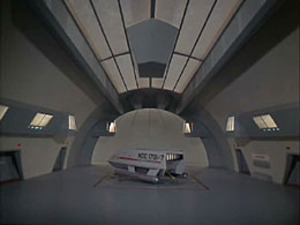 Though generally not lauded as a classic episode, I thought this was a good choice for indoctrinating the Pup into the Roddenberry-verse.  Why?  It’s a classic Spock episode.  I know what you’re all thinking, "Amok Time" is the best Spock episode.  That may be true, but it’s not a good introductory episode for Spock.  "Galileo Seven" is Spock as he is throughout TOS.  Logical, calculating, smarter than anyone else on the scene and yet unable to figure out how to plug the human variable into his calculations.

Though the episode’s special effects do not really hold up, the writing does.  Aside from the classic Spock dilemma, there is also the classic ethical dilemma which was one of the hallmarks of the series as a whole.  Do the needs of the many outweigh the needs of the few, or the one?  It’s a forgotten Trek classic, in my opinion.

While she didn’t seem to love it, she certainly enjoyed it well enough.  He tension level rose appropriately as the giant ape people closed in on their Starfleet prey (one of the few episodes wherein the
Starfleet fodder were not red-shirts).  At the end of the episode she said the same thing she’s said since the end of "Balance of Terror": "More!  More!"