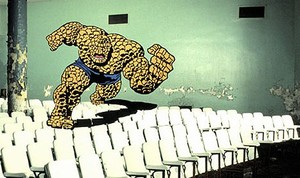 The photo to the right has not been Photoshopped.  It is a mural painted on the walls of the auditorium in PS 37 in the Bronx. Artists have been using perspective to create optical illusions — a technique known as anamorphosis — since the 1400s. It works on the same principle as writing "Bus Lane" on the road in long, stretched out letters. They look normal as you’re approaching, but when you reach them they look weird.

Here artist Justin Ladda makes the Marvel’s The Thing appear to leap off the wall and out into the audience by meticulously graphing the image, including the shadow, onto the seats. (See below.) Ladda’s other installations include a giant fly in swimming pool and a mirage staircase. 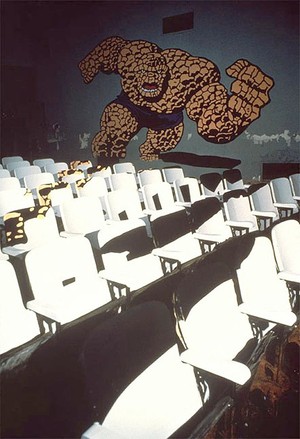 You can see these and many other neat visual effects of different kinds at Mighty Optical Illusions.