A couple of weeks ago, I sent out a plea for help in the form of a blog posting, and you delivered.

Audacity was bringing in the WAV file of the audio CD just fine and when combined with the WAV for the intro-music continued to sound fine.
As many suggested – the LAME encoder in Audacity was the issue when trying to convert to MP3. [HT to
Rodbotic, dajolt, Kevin Ryan, Paul Kimbrel, Steve Webb, and Rick R.] 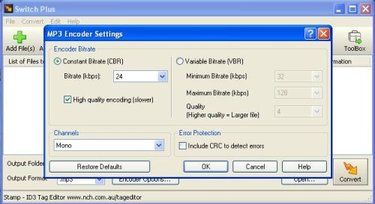 I looked at each and every suggestion and settled on Switch.
[HT to Greg Rose – it was looking at Wavepad that I found
Switch.] Switch does everything we need right now, and I’ve still got several good ideas for future audio software packages if we outgrow the current setup.

All I can say is that the readers of this blog are an impressive group of people who
proved the collective wisdom of the Geekdad.  You have my thanks and appreciation.  Now all I need is a school project where I can assist the kids in bringing an audio element into the mix….

Comics Spotlight on Road-Sign Hank and the Aliens

A Card Game That Makes Yu-Gi-Oh Walk the Plank