Theodore Gray is the uber-Geekdad. He specializes in chemistry rather than electronics. Gray is a long-time researcher for the uber-math software package, Mathematica. 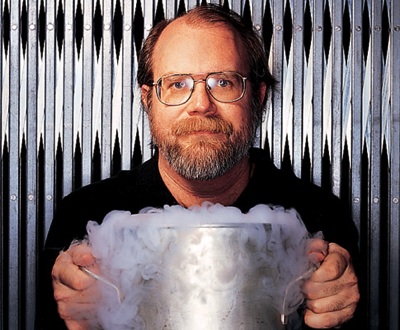 In his spare time he collects elements. His Periodic Table Table, wherein he has placed most of the known elements into a table, in the order of the periodic table (table table, get it?) is his main call to fame. But he also pens a monthly column for Popular Science, called How2.0. Each month he presents a very abbreviated report on one of his recent experiments. His style is not to give you the exact directions of how he did the demonstration. This may be for liability reasons on PopSci’s part, or it may be his style of encouraging your own attempts. In either case what you get is sort of an existence proof that you can indeed preserve snowflakes with superglue, or make a Edison light bulb with a glass bowl and an electric welder.

Soak a fresh snowflake in superglue and then put it into your freezer until the glue and water subliminate.

Cover some tungsten wire with a glass jar and fill it with helium to expel the oxygen, then plug it into a welder.

There’s a lot buried in his website, which we are slowly making our way through. For some reason, he has not posted the last year’s PopSci columns, although they are available on the PopSci web site, under Gray Matter.

A Surprise for This GeekMom – Playmobil Is for Older Kids, Too!