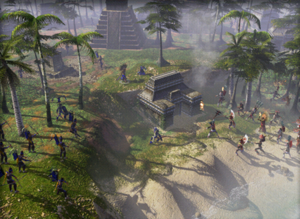 Over at the main Wired site, Clive Thompson has a great new column: "You Grew Up Playing Shoot’em Up Games. Why Can’t Your Kids?" In it, he wrestles with something all GeekDads have to sort out: what kinds of games are appropriate for each of your kids, and how do you know?

Needless to say, the game ratings by themselves aren’t very helpful. Most error on the side of being too conservative. For instance, Age of Empires III, which is a fantastic and educational real-time strategy game (shown) that teaches history, resource management and economics, is rated T for teen ("Blood. Violence.")

So you’ve got to set your own standards, based on understanding both the game and your kids (the game is the easier part). Clive quotes me on one technique I use:

The Lego Company, it seems, has a policy of not producing toys that replicate 20th century weapons. "You can have swords, and you can have laser guns in space, but no actual 20th century guns," Anderson says.
So his four children can play games like Halo, since it contains only futuristic, fantasy war, where you’re killing only green-
or blue-blooded aliens. The same goes for Roman swordplay titles. "But it clearly walls off Grand Theft Auto."

(I e-mailed Lego’s spokesman Michael McNally, and he confirmed the company’s Solomonic logic. Lego, he wrote, agrees that good-versus-evil combat "is at the root of children’s play scenarios, and we believe is an important part of a child’s exploration of the world." But they don’t want it infecting the children’s perception of the real world around them, so the solution is to place it decisively in the realm of fantasy.)

One thing that Clive and I talked about that didn’t make the final piece is sex vs. violence. I find myself pretty tolerant of violence in videogames, but will ban them for even a hint of sexual themes or inappropriate language. Is this because, as my friends suggest, I’m an American and thus a prude? Perhaps, but I actually base my decision on biology. Kids are hard-wired to play-fight, pretty much from birth. Just watch a three-year-old turn a banana into a gun. But they tend not to really understand sex until puberty (and maybe not even then!). I just don’t think they’re ready to process sexual themes until they’re teenagers, so I’ll follow the "T" rating on that.

And as for bad language, that’s just considered coarse in our home, so we’re simply being consistent in our prohibition.