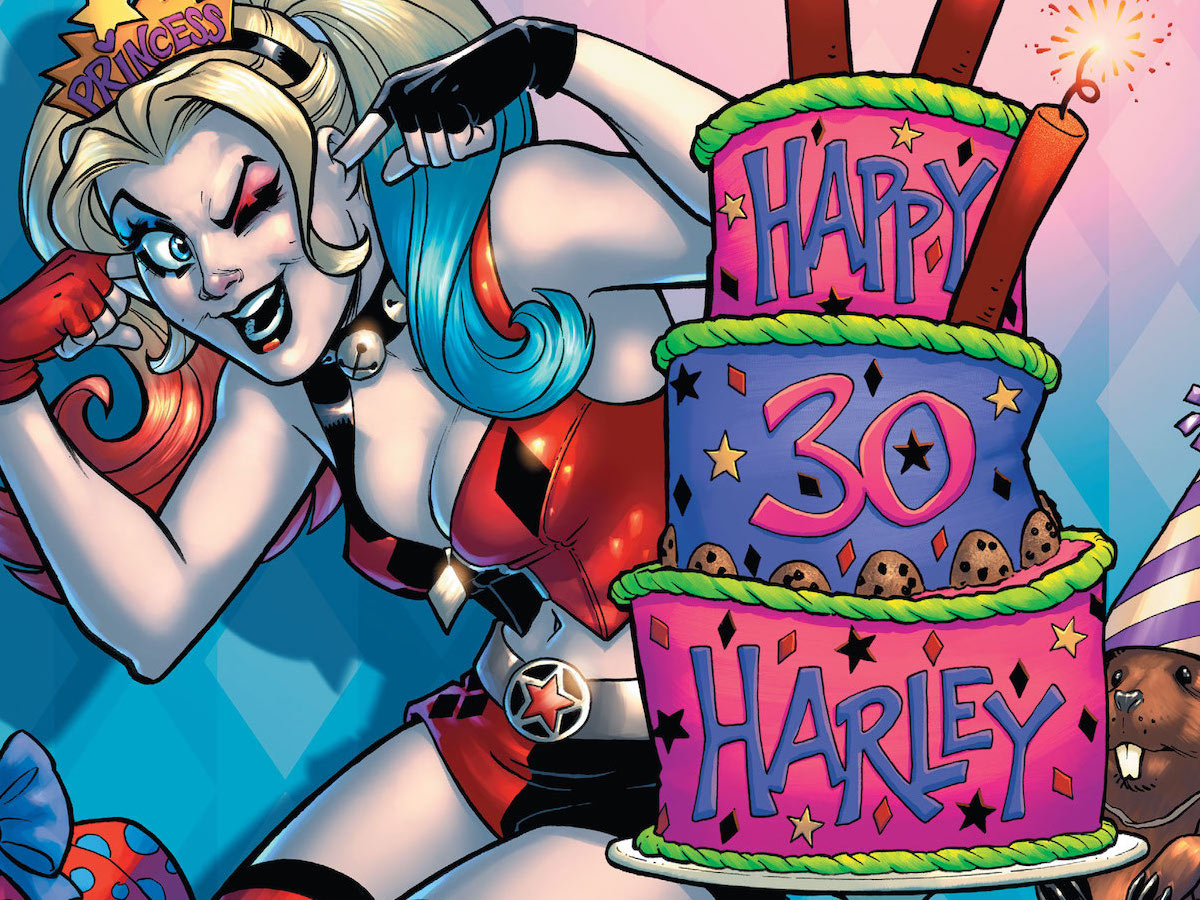 Ray: It’s Harley’s turn for an oversized anniversary issue, with just about all her major modern writers and some newcomers contributing stories. Yes, it’s only been thirty years for Harley instead of eighty like the others, but when has Harley ever played by the rules? Let’s take a look at the stories within.

“Uncommon Bonds” by Palmiotti, Conner, and Hardin picks up on the most famous Harley run of all time and the one that largely defined the modern character. After Harley and Red Tool foil a robbery at her apartment, they get a clue that the crooks will hit Wayne Manor next. So Harley breaks in, and while Bruce is out doing his nocturnal activities Harley is left teaming up with Alfred. She owes him for fixing her taxidermied beaver, of course, and the two make a great comedy team as they fight off a band of mooks.

“Cease and Desist” by Scavone and Albuquerque features a cuisine that really hasn’t done much work with Harley, and it finds Harley in the Suicide Squad along with a new recruit, “Fifteen-Minute Man.” He has a ticking clock on him, promises to finish any mission in fifteen minutes, and… doesn’t seem to have many other skills. He was actually on the PR team before he angered Waller. This story has some funny moments, but an oddly sadistic streak for both Harley and Waller that reminds me of how much I prefer solo Harley.

Stjepan Sejic goes solo on “Submissive,” sort of following up on his “Harleen” miniseries but taking place more in the modern day. After Selina gets under Harley’s skin by telling her she’s not Joker’s sidekick, she’s just his submissive, Harley decides to go rogue by taking out the Penguin because… it seems like the thing to do? Things get so chaotic that Ivy has to get involved, and Harley winds up discovering some embarrassing things about herself. Sejic is a sex comic creator, and you can tell, but the funny, kinky style here works in a lighter way.

Current writer Stephanie Phillips and Riley Rossmo take on “How to Train Your Hyena,” and this is set in between arcs of the current run. After her space adventure, Harley is looking to collect her best boys Bud and Lou, who are currently residing in an animal sanctuary. Kevin is along to help and try to talk sense into her, but the reunion is interrupted by a gang of criminal poachers. Sure enough, violence ensues before a sweet reunion. This issue also has a really well-done flashback to how the bond between Harley and her hyenas began.

Garcia, Suayan, and Badower reunite the gang for “Criminal Sanity,” a return to the pulp/noir inspired Black Label series that cast Harley as a criminal investigator hunting the Joker. This is a prequel, showing us how Harley was recruited by the GCPD initially. While she was obsessed with finding her girlfriend’s killer, she became involved in some cases that looked a lot like Joker killings—but were just a little off. Some surprising twists, but this universe just never really worked for me because it lacked the spark that makes Harley work.

Harley’s co-creator Paul Dini is joined by Guillem March for “Siren Soiree,” and this is easily the best story so far. Set during the Sirens era where the girls went semi-straight, it features Harley getting bored and deciding to throw a house-warming party—that turns into a bash featuring every female villain in Gotham, several heroes who have no business being there, and surprise deep-cut party crasher. This is basically a sitcom starring Gotham villains, and it’s got some of the best characterization for all three Sirens I’ve seen in a while.

Sam Humphries is joined by Erica Henderson on “A Legend Is Born,” and I personally think Humphries had the best Harley run ever. This story finds Harley in a bizarre fantasy kingdom, working as a Jester when she decides to throw it all away and go on an epic quest… which she botches in epic fashion. I wasn’t sure where this was going—is Harley playing D&D? Is this an Elseworlds? But the ending has a very clever twist that teases more, and I hope Humphries and Henderson get to explore this bizarre tale further.

Suicide Squad writer Rob Williams and John Timms take on “The Last Harley Story,” and this is mood whiplash of the highest form. When Harley somehow survives a brain bomb detonation, she’s now the last villain standing in a world where Amanda Waller has ended crime by inserting a microscopic brain bomb in every person. The action in this is top-notch and the visuals are fantastic, but the story seems to twist and turn a lot in odd directions. Harley’s choice of henchmen is hilarious, but the ending is suddenly very bleak.

Cecil Castellucci and Dan Hipp tackle “Troop Harley Quinn,” a light-hearted tale that has Harley try to get into the Gotham Womens’ Club, only to be told by its snooty leader that she needs to lead a troop of girl scouts and prove she can be a productive citizen. Well, she does lead the girls—and turns them into criminals, teaching them how to tear down the Gotham City power structure. This is a pretty simple story, but Dan Hipp’s cartoony gonzo art is the main selling point here.

Finally, “Harley’s World” has Terry Dodson joined by Mindy Lee as co-writer. This is an odd tale that follows Harley through her mindscape as she encounters Batman, Joker, and Poison Ivy. The structure changes from a chase, to a dance, to a trapeze act, and it looks gorgeous thanks to Terry Dodson’s art, but it ends sort of abruptly without giving us any concrete messages about what it all means.

So overall, this issue was kind of scattered—but would we really expect anything else from Harley? Not every story worked, but the ones that did could be brilliant. 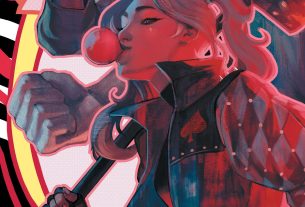