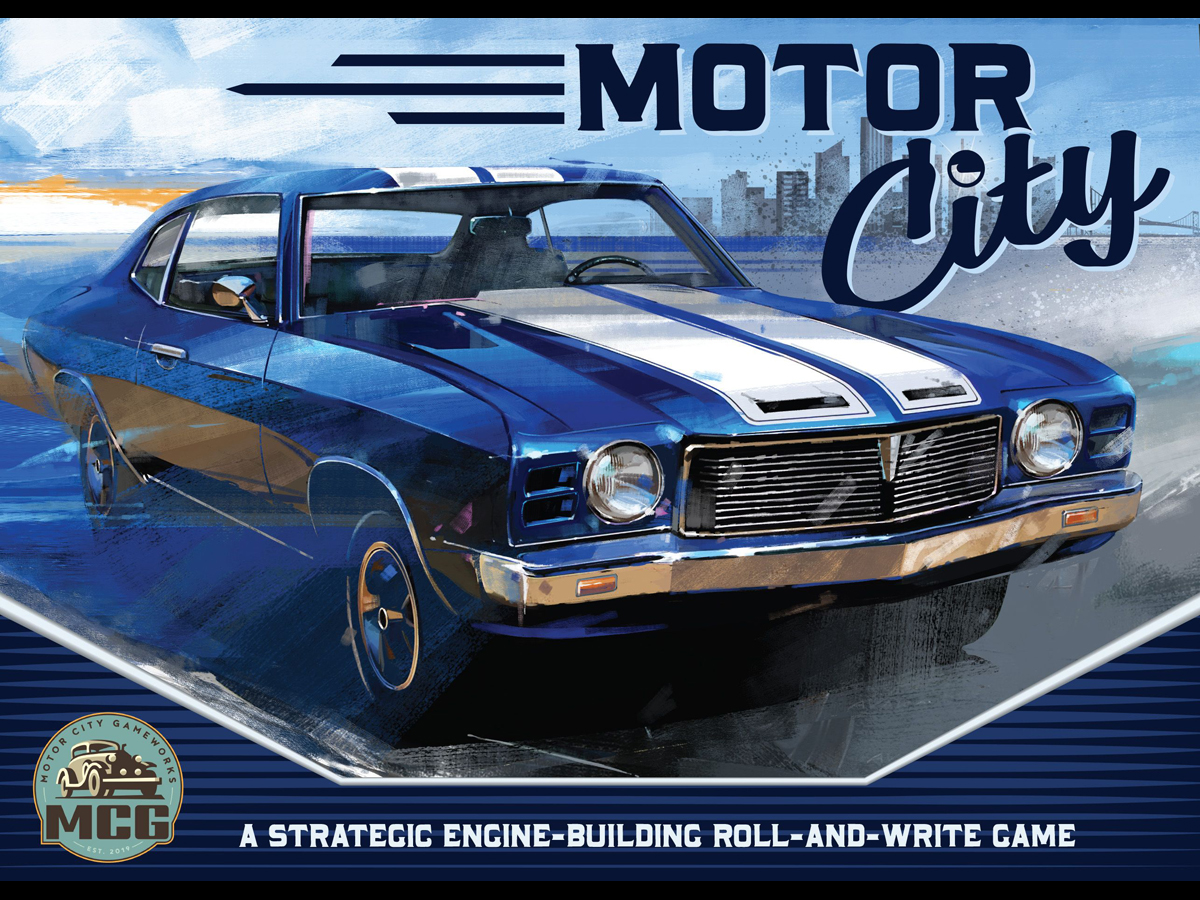 How will you lead your automotive plant to success? You’ll have to balance production, testing, and engineering—and deal with that pesky corporate auditor.

What Is Motor City?

Motor City is a roll-and-write game for 1 to 4 players, ages 12 and up, and takes about 45–60 minutes to play. It’s currently seeking funding on Kickstarter, with a pledge level of $29 for a copy of the game. (There’s also a $129 tier for those who simply can’t wait—you’ll get a handmade signed prototype right after the campaign closes, and then a finished copy later.)

Motor City was designed by Adam Hill, Ben Pinchback, and Matt Riddle, and published by Motor City Gameworks, with illustrations by Ilya Avakov and Marlies Barends.

Note: My review is based on a prototype copy, so it is subject to change and may not reflect final component quality. The first player marker will be a blue muscle car (like the one on the cover) rather than what’s pictured.

The scoresheets have various tracks and paths to mark, designed to look like various parts of an auto plant, with test drive tracks, a production line, engineering offices, and even a parking lot for sales. There are lots of icons throughout both for things that you gain and prerequisites needed for certain bonuses, and sometimes it can be a little tricky matching those up. (Okay, to get this bonus I need Crate E … so where do I get Crate E? Oh, here’s Crate B … where is it used?) With some experience, you’ll learn where things are, but it can be a little confusing the first time you play.

The blueprint board is where the dice are placed after being rolled: it’s sorted into columns for the value of the die, and rows for the different colored dice. The top has the different actions you can take for each column, and the spaces themselves have icons for bonuses. My prototype had the bonus icons printed in the center of each space, which meant that they were often partially obscured once you placed the dice there. I hope they move the icons to the side or a corner of each space, allowing room for the dice and the icons. (Note that the bonus effects in the first column will be moved to the last column in the finished game.)

How to Play Motor City

The goal of the game is to score the most points through taking the various different actions: sales, testing, engineering, and production.

Place the blueprint board in the center, and create a pool of dice based on the number of players. (The red die wont be used until the end of the first round, and the black die is only used for solo mode.)

At the beginning of each round, the first player will roll all of the dice and place them onto the blueprint board. Then, players will take turns drafting dice from the board to take actions (until everyone has taken two dice); everyone will get a bonus action from the single remaining die. Then the auditor shows up.

On your turn, you take a die and do the following in order:

There are four main actions that appear at the top of the columns 2 to 5 as well as the top corner of your scoresheet: Sales, Testing, Production, and Engineering, and these are where the majority of your actions will be used. Each time you take an action, you mark spaces on the track in that section of the scoresheet. Some of the tracks have multiple tracks or branching paths, in which case you choose one track/path to mark. As you mark off spaces, you’ll earn any bonuses shown in those spaces. Each action starts off at level 1, which means that you mark one space every time you take that action. However, you can also spend your die action to upgrade the associated action (by spending money), to a maximum of level 3. Every time you take that action in the future, you’ll get to mark more spaces.

In the Sales section, you actually circle the spaces as you go, representing dollars that you’ve earned, and then when you spend money, you cross out those circles. There are various bonuses you get for every $5 earned, and you’ll also score points for unspent money at the end of the game.

In the Testing section, there are three test tracks—you start with one of them, but you have to spend money to buy additional cars for the other two. Driving along the test tracks earns various bonuses like dollars, engineers, and research, but most importantly it includes some of the crates and tires needed for the Production section.

Engineering has several tracks that you fill from bottom to top, earning bonuses—but you can only mark a column where you have an engineer. At the top of most of the tracks there’s a big hub; if you reach the hub and you meet the requirements (2 TPS reports, which are earned as bonuses from the blueprint board or other tracks), then you’ll score bonus points at the end of the game.

The Production line has a branching path with several hubs. Each hub has some number of requirements, usually a TPS report, plus crates or tires; if you reach the hub and fulfill all the requirements, you’ll gain either bonus points or advance your speedometer.

The speedometer is a special action, and the only ways to check off a space are to take a die from the “1” column on the blueprint board, or to earn a speedometer bonus on one of the tracks. You check off the next space on the speedometer, which will earn you points at the end of each round.

There is no dedicated column for Research, but any die action may be spent on Research instead of its associated action. You simply check off the next space on the track. Every 3rd space gains you a bonus: you may either purchase an item from the shop, or you can gain a bonus action (Sales, Testing, Engineering, Production) at its current level.

After each player has taken 2 dice, there will be 1 remaining on the blueprint board. Everyone gets a die action with that die (use, upgrade, or research) and then the round ends.

At the end of the round, every player scores points for their current speedometer level. Then, the first player rolls the red auditor die, rerolling if it’s a 6. Compare it to the blueprint board to see what its associated action is. Everyone places their auditor marker on their scoresheet on that action—you may not use that space for a scoresheet action this round unless you spend $4 for audit protection.

Pass the first player marker and start a new round.

The game ends after the end of round 8. Players total up all of their victory points: speedometer scores, bonuses from Sales (and unspent money), completed test tracks, completed engineering hubs, completed production hubs, and certification bonuses. Highest score wins! (There are no tie-breaker rules.)

The solo variant uses the black die and an automated ruleset representing Auditor Emma. Emma will take dice from the board according to a particular algorithm, and then crosses out spaces on your scoresheet that become unusable, usually starting from the end of a path. Your goal is to score as high as possible while working with these restrictions.

Why You Should Play Motor City

Last year, I had the opportunity to review Three Sisters, a gardening-themed roll-and-write game from Matt Riddle and Ben Pinchback. Riddle and Pinchback have been designing games together for years, but Three Sisters is the first title published by their own publishing company, Motor City Gameworks, and it was delivered to backers recently. (Watch for a follow-up post soon!) Motor City is their next title, designed along with Adam Hill (also of Motor City Gameworks), and though it has a different setting, it retains a lot of the combo-tastic feel of Three Sisters.

You need sales to earn money so you can upgrade your actions, which let you check off more spaces. But if you do engineering, you have the opportunity to upgrade your sales action. Oh, but if you do some research, you can get another engineer! And you know what helps with research? The middle test track. Wait, you don’t have your second test car? You’ll need some money for that … from sales. Figuring out the optimal order to check off various boxes is part of the puzzle. You’ll want to work on all of the various tracks, of course, but because of the way the bonuses are arranged, sometimes you want to be ahead on one track, and sometimes you want to wait until you’ve made progress on another.

Another piece of the puzzle, of course, is working with what’s actually available to you: the dice on the blueprint board. You’re limited somewhat by what numbers are rolled, though there’s a bit of flexibility, too. The number rolled determines the die action, which also affects which action you’re allowed to upgrade when you take it, so if no 2s are rolled then you won’t have the opportunity to upgrade your Test action this round. The color affects what blueprint bonus you get, so a grey 3 has a different effect from a blue 3. But regardless of what die you take, your scoresheet action lets you put it on any of the main actions—unless you’ve already used it this round, or that annoying auditor has blocked it.

The speedometer presents you with a tricky choice: you score points for your current “speed” at the end of each round, so the sooner you mark off spaces, the more points they’re worth. If you get to speed 2 in the first round, that’s already 16 points earned. There’s no associated scoresheet action, so usually you only get to increase your speedometer when you take a 1 from the blueprint board. There are a few other places on the various tracks where you can earn a speedometer bonus, but it’s always just one space. Since the blueprint board doesn’t offer any bonuses for the 1 column, taking a speedometer die means you’re missing out on some other useful effects—but getting those points banked early might be crucial.

Research is another interesting aspect: you can spend any die action on research, checking off a space, and you can earn bonus actions. If you’ve upgraded an action, a checkmark in Research could let you mark 3 spaces on a track somewhere else—and there’s one Engineering hub that gives you bonus points for completed Research.

As with Three Sisters, I think Motor City is one that will appeal to roll-and-write fans who like a more complex puzzle. I’ll admit that the car-industry setting doesn’t do much for me, but I still really enjoyed playing the game anyway. I particularly like the idea of upgrading actions so that you get to check off more spaces when you take an action, and trying to figure out the best sequence of upgrading my actions.

For more information or to make a pledge, visit the Motor City Kickstarter page! 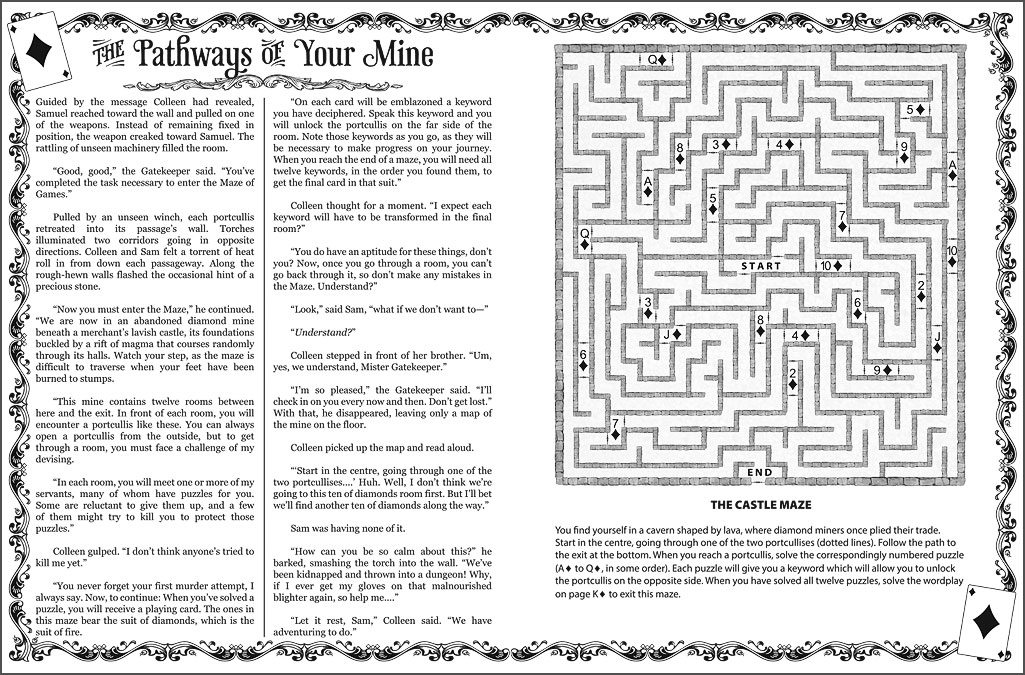 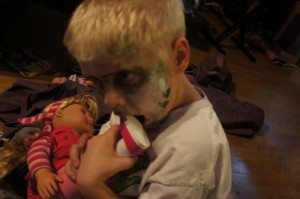