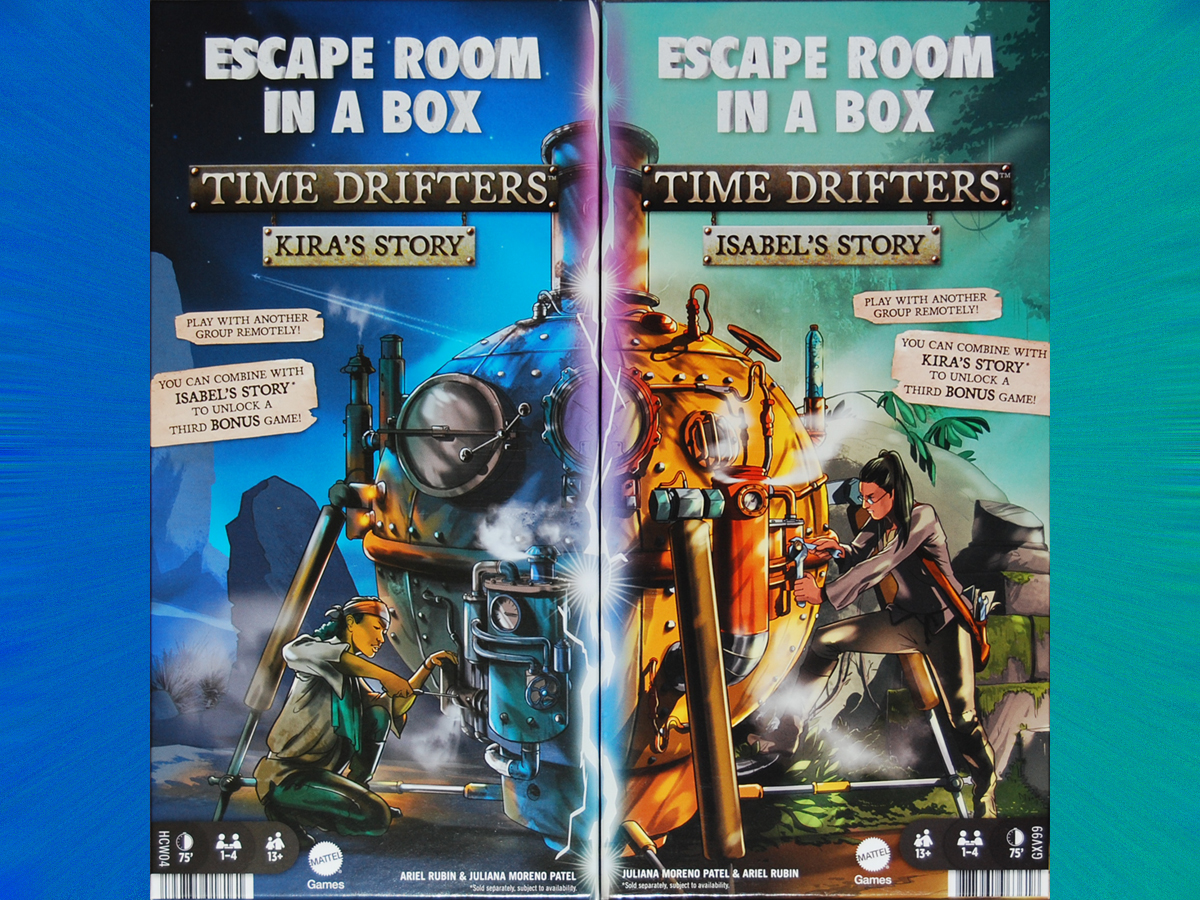 Kira and Isabel have been time-hopping, but a disaster has split them apart, each with half of the time machine! Can you help to repair the machine and get them back together again?

What Is Escape Room in a Box: Time Drifters?

Escape Room in a Box: Time Drifters is an escape-room style game for 1 to 4 players, ages 13 and up, and takes about 75 minutes to play, according to the box. Unlike the other Escape Room in a Box titles, this one actually comes in two separate boxes, Kira’s Story and Isabel’s Story: each one can be played separately, and there’s a third bonus game that can be played (even between remote players) when the two boxes are combined. Each box retails for $14.99; they’re available directly from Mattel or you can find them in retail stores. (I do think the estimated time is pretty high, though I’ll talk more about that in my conclusion.)

Escape Room in a Box: Time Drifters was designed by Ariel Rubin and Juliana Moreno Patel and published by Mattel. (The illustrators are uncredited.)

Now, I can’t show you all of the components because that’s part of the puzzle. In fact, there’s a panel you’re not supposed to lift until you start the timer, though I think the photos I’ve shown here are vague enough that they don’t really serve as spoilers.

Each of the boxes includes a mix of puzzles—some that you’ll just solve using pencil and paper, and some that involve physical components. Each one also has a puzzle box as the ultimate goal—opening that box will reveal the components needed for the third bonus game. (The box does note that the game includes “non-working time machine” so don’t actually try to travel through time with these.)

While you can write directly on the components while working on the puzzles, we found that almost all of the puzzles could be done using scrap paper just as easily, thus allowing you to pack the box back up for somebody else to try. (And if you do write on the puzzles, the website has a printable refill pack available as well, along with instructions on how to repack everything.)

I did have one comment about the puzzle box included in Kira’s Story. One of the puzzles involves inserting plastic pegs into the lid of the puzzle, and you’ll have to place the pegs in various arrangements to solve the puzzle. What we found was that the pegs were extremely difficult to remove from the lid, and in fact while trying to pull them out, we pried the lid off entirely, well before we were supposed to. It didn’t damage the lid and we were able to just snap it back on, but that did pull us out of the story a little, and it happened multiple times while working on that particular puzzle.

How to Play Escape Room in a Box: Time Drifters

The goal of each game is to repair the time machine; the goal of the combined game is to figure out when and where Kira and Isabel need to go to get back to each other.

There’s very little setup: you just read the opening letter, set yourself a timer, and then lift the “STOP!” panel and get to it. (I will note that the letter in Kira’s Story mentions a 75-minute limit, but never tells you when to start the timer. Isabel’s Story explicitly says to start the timer before you lift the panel.)

Each box has its own set of puzzles: Kira’s Story includes a large sheet that’s a time machine schematic, and you’ll have to solve puzzles in order to fill in the various instructions on the schematic to repair the part. Isabel’s Story involves figuring out the positions of various diodes that will tell you how to arrange four switches to open the box. There are a number of different types of puzzles: word games, physical arrangement puzzles, observation-based puzzles, logic puzzles, and many of them incorporate the physical components in different ways.

The combined bonus game is designed in a way that you can play with another group remotely: it reuses some components from the previous game, but also includes new puzzles that were inside the boxes. Many of the puzzles are written in a way where one group will have some written clues and the other team will have physical components to figure out, and they have to work together to find the solutions.

Why You Should Play Escape Room in a Box: Time Drifters

Although this was designed to be played by two different groups, and then the combined third game, I wanted to try both boxes so I’d have a better idea for the review. My group of four players (including my teenage daughter) sat down and played through both boxes and the bonus game in one evening. For the bonus game, we split into two “teams” to separate out the components and play as if it were over Zoom, where nobody was allowed to handle or inspect components that belonged to the other team. It was fun to get to do both halves of the story; since we’d all worked on the first two parts together, we had at least seen all of the primary physical components, which made the third part a little easier than if we had played remotely, but it still worked pretty well. The one thing I would consider is that if you have 4 people in each group, it might get a bit unwieldy with 8 people all trying to work on puzzles at the same time over video, so you’ll have to establish some protocols there.

I’ve enjoyed a couple of the other Escape Room in a Box titles, The Werewolf Experiment and Flashback, and this one is comparable to those: some physical (plastic and cardboard) components, along with a lot of printed material to support those. Without giving any spoilers, I will say that they used the components in clever ways, and many of the physical components are used in multiple ways for different puzzles, which was a neat trick. There’s a wide range of escape room games, and most of them tend to have mostly cards and paper components with just a few physical objects. The Escape Room in a Box titles are on the “more physical” end of the spectrum, and I like the actual lock-boxes that come in these—even though Kira’s Story had the issue with the box prying open unintentionally.

Each box gives you a 75-minute time limit to complete it, and the bonus game has a 60-minute time limit, but we actually completed all three parts in about 70 minutes total. I think overall each individual box felt a bit simpler than the usual Escape Room in a Box experience, but the three games combined were closer to what I usually expect. We did divide up the puzzles to some extent, working independently, which is possible with this line of games because there are usually several puzzles that can be worked on in parallel, before all of the answers feed into the final puzzle. That’s great for groups where everyone likes to be able to get something to do instead of feeling left out because too many people are already working on the “current” puzzle. On the other hand, it does mean that there were puzzles that I contributed nothing to and all I saw was the end result—so it may just depend on your group and how they like to handle things.

Story-wise, Kira’s Story felt more like fixing a machine and a bit less about time travel. Yes, there were icons that represented various artifacts from a wide span of human history, but for the most part it was more like putting gears in the right place to get a machine going. Isabel’s Story had a bit more of a time travel narrative, with trying to figure out the right time or location using various clues, so I’d give that one a slightly higher rating if that’s the setting you’re interested in.

The combined story was fun to do, though the story required even more suspension of disbelief: I suppose, as it turns out, if you have half of a time machine, then that allows you to travel through half of time? Kira and Isabel have to figure out the exact moment when their two halves of the machine overlap—I guess I hadn’t realized that’s how time travel works.

Overall, my group had a good time with the two boxes (despite our skepticism about traveling with half a time machine). I like the idea that the two games can be combined between two remote groups (though I should note that it’s probably best if all the people within a group are in the same physical location, since they’ll be sharing components). I think it would make a fun way to do an escape room game over video in a way that wouldn’t be possible with most escape room games.

For more information or to order a copy, visit the website!