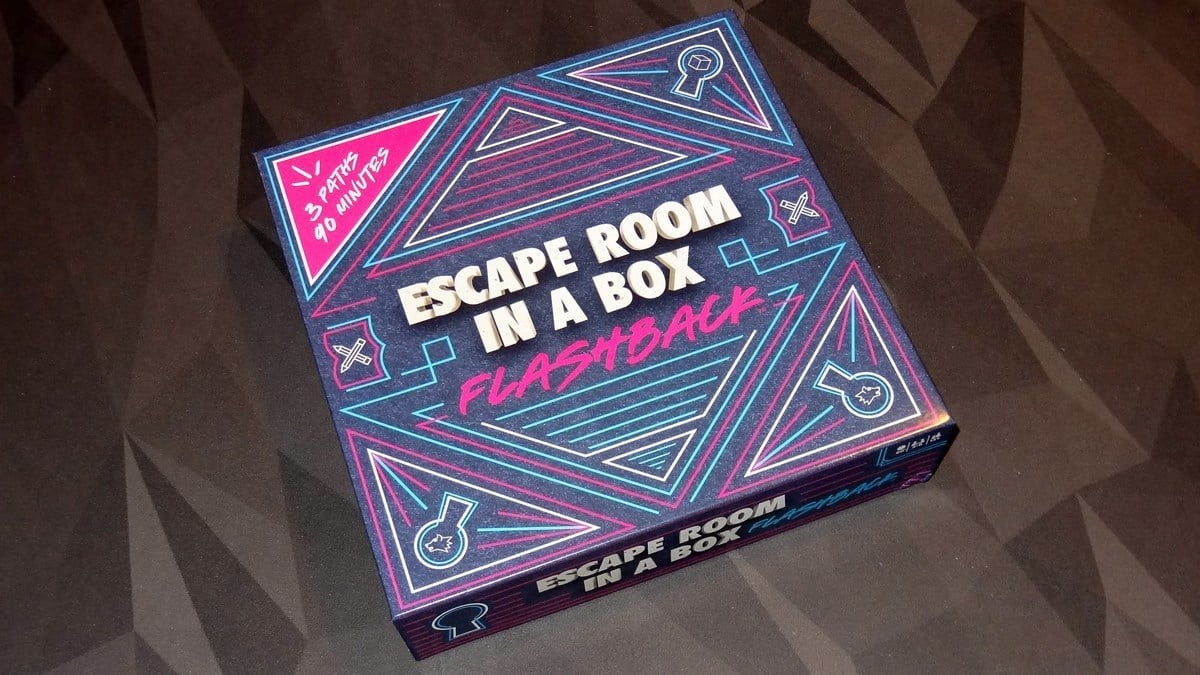 Well, I have bad news. Dr. Cynthia Gnaw has turned herself into a werewolf and is on her way to eat you. The good news is, you’ve got 90 minutes to follow Dr. Lisa David’s instructions to build a de-werewolfication amulet.

What Is Escape Room in a Box: Flashback?

Escape Room in a Box: Flashback is an escape room style game from Wild Optimists for 2 to 8 players, ages 13 and up, and takes up t 90 minutes to play. It retails for $29.99, and is available in stores and online at Amazon. (More information is available at the official website.) Although the game is recommended for ages 13 and up, I think you could play with younger kids, depending on their ability to solve puzzles under time pressure. Although thematically the game is a sequel to The Werewolf Experiment (see my review here), you don’t have to know anything about that one to play this game.

Note: since this is a puzzle-solving game, I won’t reveal too much about the specific puzzles, but I will include at least a little bit of discussion about the types of components included and the types of puzzles involved. If you’d rather go into this without seeing any spoilers whatsoever, I suggest you stop reading now!

The first thing you see when you open the box is actually two sheets of paper: one is a letter from Dr. Lisa David (author, professor of literature, and also Dr. Gnaw’s childhood friend) that gives you a little bit of story about what’s going on; the other is a list of rules and tips. Underneath those is a big “STOP!!” note that prevents you from moving ahead until you’ve looked at the instructions.

I won’t detail all of the components, but here’s what you can see once you open the box.

Compared to most escape room style games, Flashback has a lot of physical components other than cards. The envelopes have a mix of papers and other things, and the baggies and boxes also contain various other items, plastic and otherwise. The locks are pretty cheap and I wouldn’t trust them on a locker, but the point isn’t to force them open—rather, it’s to figure out the clues.

Note that you will need to provide your own scrap paper and writing utensils, and also a freezer. No, really—that’s in the instructions. A freezer is best, though some ice water will do in a pinch—though you won’t want that sitting out the entire time.

If you really want to see a comprehensive list of what’s included, be warned that this includes a lot of spoilers: the “Repack Instructions” on the website show how to put everything back together, so there are images and names of all the components and which containers they go in.

How to Play Escape Room in a Box: Flashback

The goal of the game is to create the Ultimate Amulet of De-Werewolfication within 90 minutes so that Doc Gnaw doesn’t eat you all up.

Setup is pretty simple: open the box, read the rules, set a timer. It does help if you have writing utensils and scrap paper handy, and (as I mentioned earlier) access to either a freezer or ice water.

Once you start the timer, you can open up the box and get started. In Flashback, there are three independent paths represented by the blue, red, and purple envelopes and containers. Each envelope includes at least one sheet that’s more like a letter, with several labeled blanks that you can fill in with the answers, and then each puzzle is also labeled independently, whether it’s on a scrap of paper or a physical object of some sort.

As explained in Dr. David’s introductory letter, the blue path is about words, the red path is about science, and the purple path is about childhood friendship. That said, there’s a mix of puzzle types: word puzzles, riddles, objects you have to assemble physically, hidden clues that you need to search for, and so on. Each path has a plastic bag with some physical artifacts to go along with whatever is in the envelopes. The letters help you confirm that your answer is correct, because the answer to a puzzle should also make sense in the blank.

Eventually, you’ll also find clues that allow you to open the combination locks—some of which lead to additional puzzles—and eventually the three pieces of the amulet.

If you get stuck, you can check the hints book, but the books say that you’re only allowed to consult 3 hints and 1 answer, or else the amulet won’t work. “It’s science.”

The game ends when you complete the amulet, or time runs out and you’re all eaten by a werewolf. (Note: as far as I know, you will not actually be eaten by a werewolf, but we did solve it within the time limit so I can’t confirm this for sure.)

Why You Should Play Escape Room in a Box: Flashback

Two years ago I wrote about The Werewolf Experiment, the previous title in this series, giving a little background behind the game: it was originally a Kickstarter project at a time when there weren’t a lot of escape room games on the market, but it took a while to produce, and by the time it arrived, many publishers had created their own versions of escape room games. The Kickstarter edition was nice, but also had a higher price point than the card-and-paper-based games, so I was glad that Mattel was able to produce it at a lower cost.

$30 is still more than you’ll pay for something like Exit (which gets destroyed during use) and Unlock! (which can be reshuffled and passed along to a new player), but the physical components add a level of immersion that I really enjoy.

The Escape Room in a Box titles bridge the gap between most play-at-home escape room games and actual escape room experiences, and that’s largely because of the tangible objects. The puzzle that uses the freezer was pretty neat, though it didn’t work perfectly; the freezer makes it easier to solve, but isn’t totally necessary. Still, it was definitely a feature I haven’t seen in a game before (and I’m guessing probably won’t see again in the future).

One thing that sets Flashback apart is the way that there are three independent paths right from the start. We played with a group of eight (a mix of adults and kids), and it was cool to be able to partner up into three groups and each take a set of the puzzles. For the most part, each group worked independently, though there are portions near the end where you have to combine answers from all three paths.

The separate paths are great if you end up playing this with a larger group, because in many escape room games everyone is working to solve one puzzle at the same time, which can result in a “too many cooks” situation. Some players will feel like they’re not really getting to solve anything. Flashback lets you split up the paths and, in many instances, each path has several puzzles that can be worked on independently as well. Of course, it does mean that if you have a big group (like mine), not everyone gets to see every puzzle, but it was still a lot of fun.

Because the puzzles can be done independently, the amount of time you spend also depends on the size of your group. Although the time limit was 90 minutes, we were done in 45 minutes, so it felt pretty easy. But I imagine that if you have only two people, you may come much closer to the 90-minute mark simply because you can only work on 2 puzzles at a time.

Now, Flashback is not intended to be replayed, but I like the idea of going back and doing the other puzzles to see what I missed. Because of that, I asked players not to write on the actual papers and to do the puzzles on scrap paper. What I didn’t realize is that there were two or three puzzles that would be much easier on the papers themselves, and it’s better to just reprint the puzzles from the website if you want to pack it up and give it to another group. I do like the fact that reprinting and repacking the game is an option. Even though your group probably won’t play it again because you’ll already know the answers, it does mean that the price isn’t for a single-use game, and the physical objects can get a second life.

In short, Escape Room in a Box: Flashback does a fine job of bringing the escape room experience into your home. For the most part, the puzzles aren’t terribly difficult, but there’s a wide variety of them, and the tangible objects help immerse you in the story. If you enjoy escape room games, this one deserves a spot on your list! 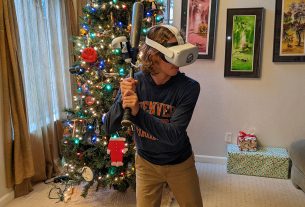 Get Out with CINEMOOD 360 (While Staying In)

3 thoughts on “‘Escape Room in a Box: Flashback’”