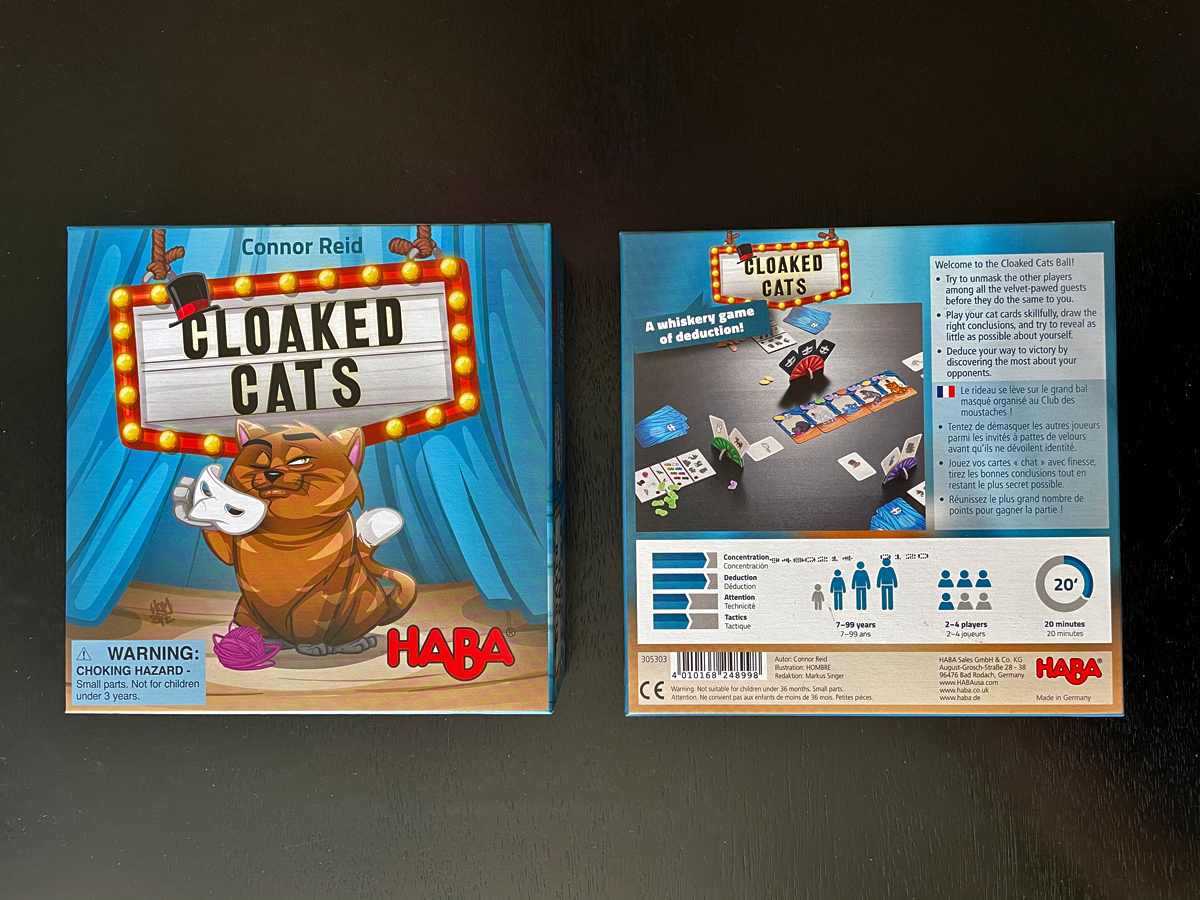 It’s time for the Cloaked Cats Ball! Test your deductive reasoning skills to suss out which cats your opponents are while keeping yourself obfuscated in Cloaked Cats!

What Is Cloaked Cats?

Cloaked Cats is a game for 2 to 4 players, ages 7 and up, and takes about 20 minutes to play. It’s currently available to purchase for about $20 and makes a great stocking stuffer game!

Cloaked Cats was designed by Connor Reid and published by HABA Games, with illustrations by HOMBRE. 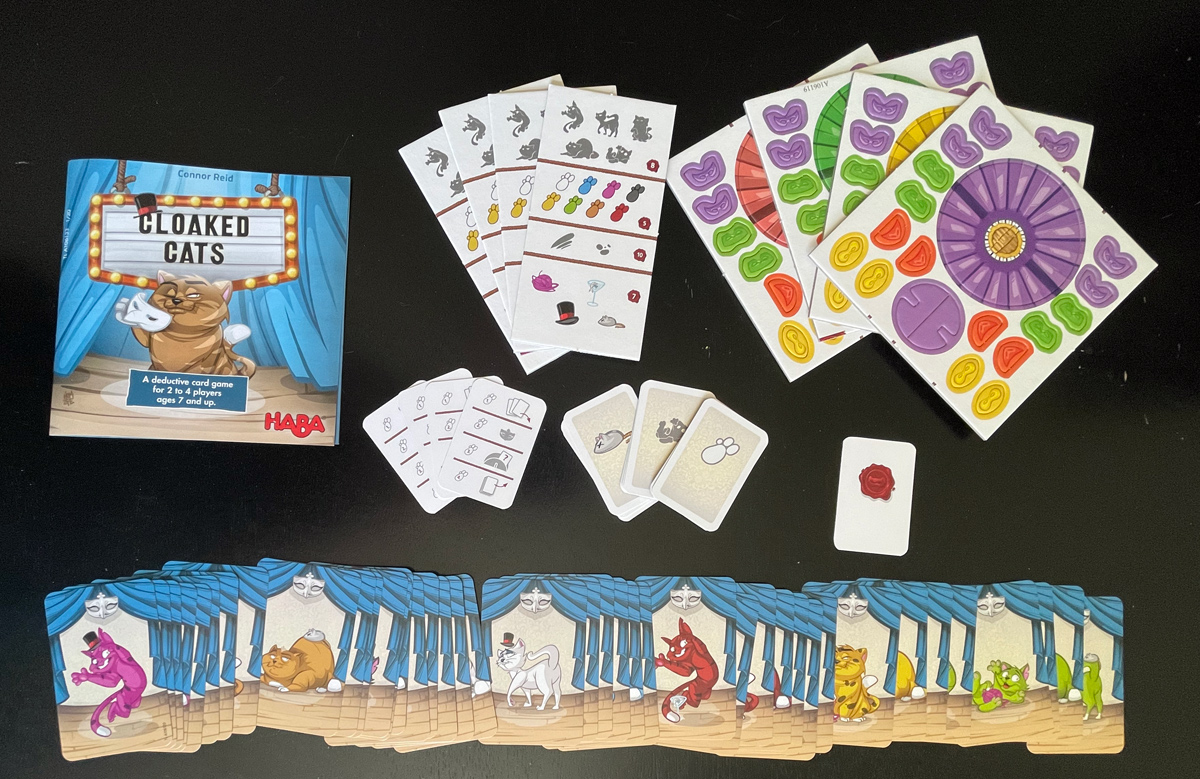 All of the cards in Cloaked Cats are of high quality, textured stock. The fans, invitations, and tokens are all thick cardboard stock. The fans and tokens need to be punched out to play, but once assembled, the fans and all components fit back into the box without needing to be disassembled.

How to Play Cloaked Cats

Cloaked Cats is a deductive reasoning game where players try to play their cat cards to gather clues about what features other players cats have, while giving away as little as possible about their own.

The goal of the game is to collect the most fans from other players while keeping as much about your own cat a secret.

Setup is pretty quick. First, take a number of invitation cards equal to the number of players and ensure the first player invitation (the one with the wax seal in the corner) is one of them, shuffle them and deal them to players face down. The person with the wax seal will be the starting player and also received the starting player card that is placed face-up in front of them. Each player is given an info/helper card to remind them of their turn actions. Then each player selects a fan and matching mask tokens. The feature card deck is shuffled and each player is dealt three feature cards face-down which are placed in their fan, facing away from other players (keep these secret!). The remaining feature cards, fans, and tokens can be put back in the box to keep them out of the play area. Lastly, the cat cards are shuffled and each player is dealt three cards face-down. The rest of the cat cards go face-down in the middle of the play area where everyone can reach them.

One note, because all cat cards that are played are laid out and stay out for the entire game, you may need a rather larger open area in the middle of your game area than typical. 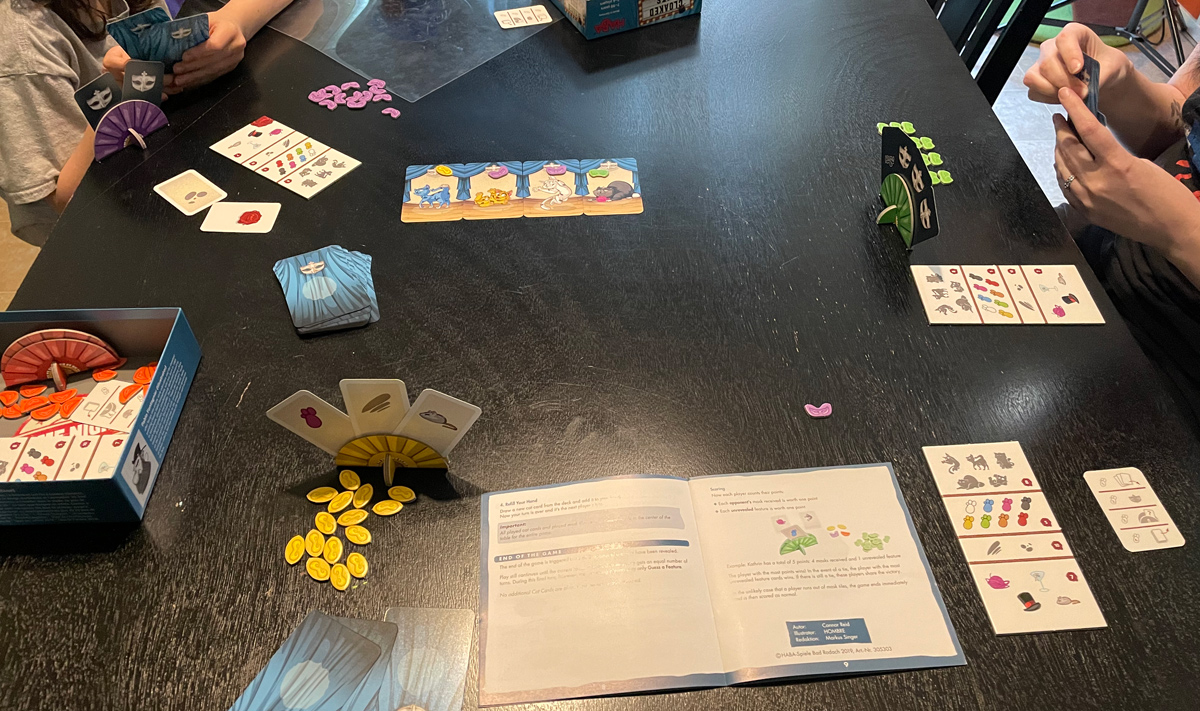 Place a card card from your hand, face down into the ballroom (the center of the play area). When selecting a cat card to play, the goal is to learn as much about your opponents hidden features while keeping yours secret, or, at the least, trying to cause confusion about your features.

Once a card is played, every player that has at least one matching feature to the card, places ones of their masks onto the card. Because every cat card depicts at least 2 if not 4 or more features, it is pretty impossible to gather enough information with just one or two cards in play, but keeping an eye on what’s already in play and been revealed can help with not only learning about your opponents, but in hiding what players can figure out about your own.

For example, using the four cards pictured above, a player with the color white, would place a mask on all four of these cards, but might not have any other matching features. But a player with white and spotted would also place a mask on all four cards. It will take more variety of cards to narrow down which features the masks apply to! And yes, it is possible for a player to have more than one feature from the same category.

Its also important to note that even after a feature has been revealed, the player still marks any cats matching any of their features – revealed or not! This threw many of us several times as kept forgetting that a mask might match an already revealed feature and so we guessed incorrectly!

The player now has the option to attempt to guess a single feature of another player if they think they have enough information to guess. The invitation card lists out all of the possible features in the four categories (pose, color, stripped/spotted, and accessories). It also shows how many cards there are with each feature to help with forecasting what may still be in the deck versus out on the ballroom. If the player guesses the feature correctly, they get a mask token from the player and the player takes the feature card out of their fan and places it face up before them. Because guessing incorrectly gives the other player a point, it is prudent to not guess unless you are relatively certain you can guess correctly, though sometimes pushing your luck on a probably guess may be worth it!

The player then refills their cat card hand from the deck and play passes to the next player. 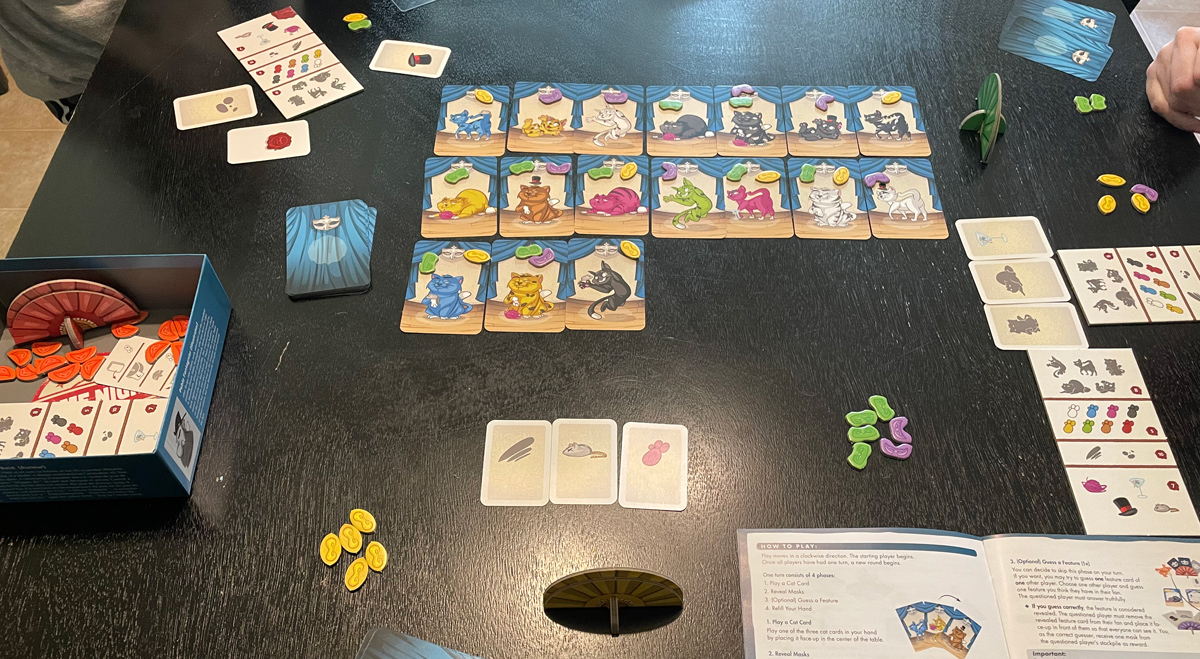 The game end triggers when all three of a player’s features have been revealed. Once that happens, the round continues for the remaining players, but on these last turns, each player can only guess a feature. No other phases of their turn are taken. After the final round is complete, scoring commences. Each mask a player has from another opponent is one point and each unrevealed feature is one point. The player with the most points wins! In the event of a tie, the player with the most unrevealed features is the winner. If there is still a tie, players share the win!

Why You Should Play Cloaked Cats

If you’re looking for a fun, quick game that can be played by (almost) all ages, but requires some brain power and not just random luck, then Cloaked Cats is a great game to have in your library. We try to steer even our youngest kids away from games with random mechanics that determine gameplay, as we want them to have some control on their ability to play and win a game. Cloaked Cats satisfied not only our parental desire for a more cerebral game the kids could play, but as cat lovers, all of our kids really enjoyed and understood the game and ask to play it frequently since we got our hands on it. For a game to make it into our standard kid rotation is a major accomplishment itself. Cloaked Cats is a great game for the entire family and makes a great small gift or stocking stuffer at its size and price point! Grab your copy now! 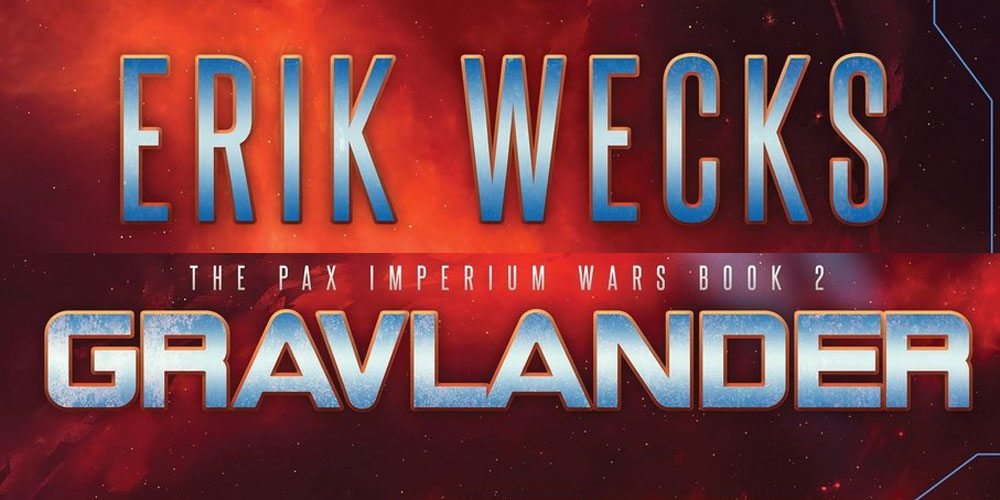 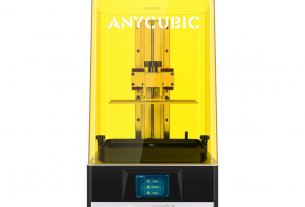