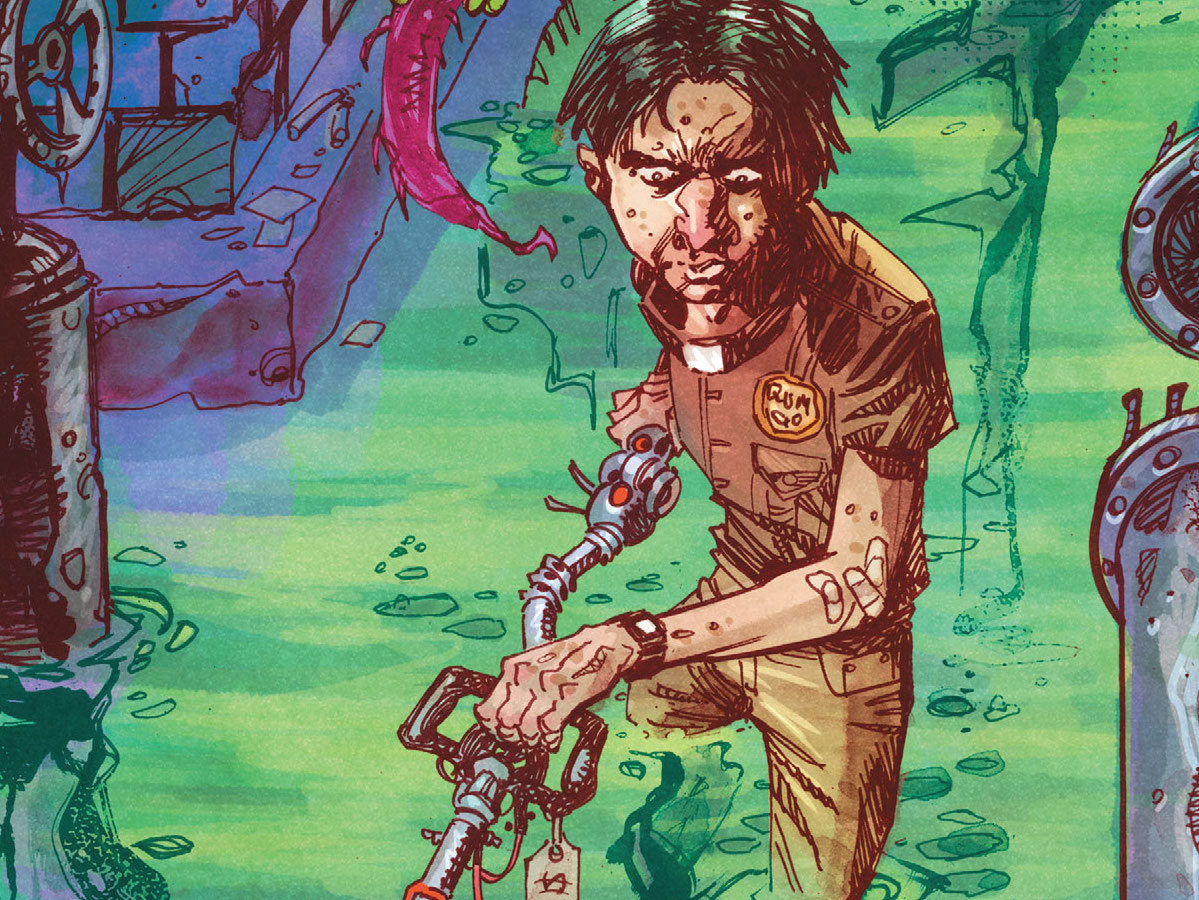 Ray: An original horror series from the brains behind “The Last Podcast on the Left,” Soul Plumber #1 is the second book in the DC Horror line—and definitely a very different beast from its Conjuring spin-off. While that was a slow-burn horror mystery, this is a twisted horror-comedy about corruption and faith. It focuses on a young man named Edgar, working a pointless job at a run-down gas station while trying to keep his friends on the straight-and-narrow. One friend, a veteran missing his nose, has embraced profanity and other vices after finding a YouTuber with an obscene name. Another, a strung-out fellow veteran—or so he claims—bursts in high on drugs and shouts obscenities and threats. Edgar does his best to re-rail these lost souls, but wishes he could do more—and he might just get his chance when a gaudy van sails into his gas station covered in crosses and advertising a service—Soul Plumber.

Taking an invitation, Edgar naturally can’t help but investigate, and finds a twisted high-tech world of televangelism as a charismatic preacher claims to be able to banish demons with a powerful magical vacuum cleaner. While it clearly feels like a scam, Edgar is too simple and too trusting to realize it, and becomes desperate to join. This leads to a bizarre series of events that puts him in charge of the Soul Cleaner—and he makes a potentially deadly decision to put it to use. This is pretty on-the-nose, and the art by McCrea and Holden can be an acquired taste. If you like over-the-top characters and a pointed satire of the faith-based-fraud market in the United States, it hits some good notes. But it also feels like a one-joke concept that will have a hard time sustaining a full miniseries, and it doesn’t help that the demon-possession genre is going to be especially competitive this week.

Ray: This series wraps up with a dark, disturbing final issue that unfortunately makes the majority of the series feel rather pointless. When we last left off, our unfortunate Jessica had been tricked into murdering her girlfriend Katie by the same spirit that tormented her through college. I was hoping it was a fake-out, but fans of the recent “The Conjuring: The Devil Made Me Do It” wouldn’t have as much hope. The fates of these girls was preordained from the start, making this feel like a rather meandering exercise in sadism. These characters deserved better.

What was a bright spot in this final issue was Dominike Stanton’s backup, “The Chalice,” ending the tales of cursed artifacts from the Warren archives. This story takes us back to Cold War era Germany, mixing horror with spycraft. These backups have all had some great horror, but they’re too short to really develop the tales. I would have read a whole series of just these.

Review – The Dollhouse Family #5: Into the Depths